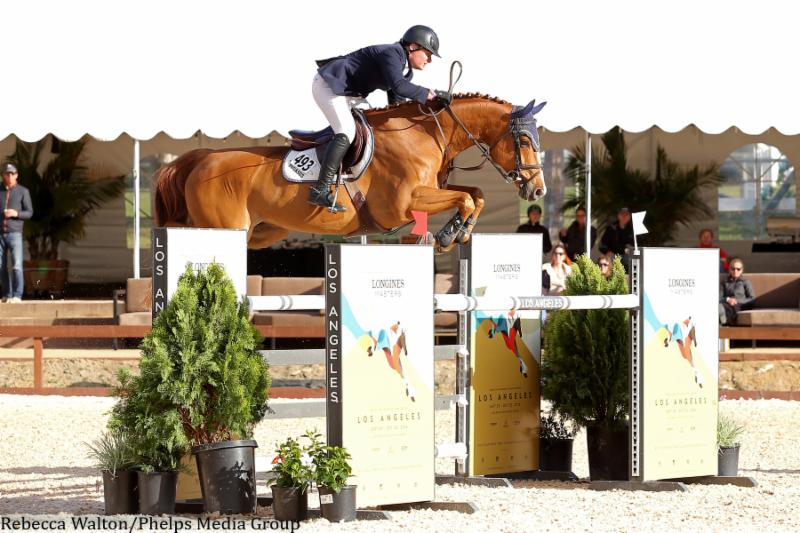 Temecula, Calif. – April 19, 2018 – The second day of competition at the Temecula Valley National Horse Show continued with rave reviews as horses and riders vied for top honors in the hunters and jumpers. Speed was the name of the game during Thursday’s $20,000 Oakmont Ranch Speed Classic, where Mitchell Endicott and Ideal de la Haisse had all the answers with a quick, clear effort to lead the lap of honor at the end of the day. In the hunter ring, champions were crowned throughout the day, with Karli Postel and Meant To Be reigning supreme in the Green/High Performance Conformation 3’9″ Hunters, while Nicolas Haness continued to dominate the Performance 3’6″ Hunters and Green 3’6″ Hunters aboard Saphir and Kumano, respectively.

Course designer Anderson Lima (BRA) challenged athletes with a track that offered many long gallops and related distances for the $20,000 Oakmont Ranch 1.40 – 1.45m Speed Classic. Endicott was only the third athlete to tackle the track, riding Alex Trubey’s Ideal de la Haisse. Picking up a fast gallop to the first fence, Endicott never let off the gas and Ideal de la Haisse never touched a fence, breaking the beam in a clear 69.317 seconds to take the early lead and wear a target on their back.

Second to last to compete, it was Elizabeth Gringas and the Daylight Group’s Daylight VDL that came the closest to catching Endicott, but when they stopped the timers a full second slower in 70.331 seconds, they had to settle for the second place award. Kenneth Vinther rounded out the top three with his own Colicchio, crossing the finish line in a clear 72.290 seconds to earn the yellow ribbon.

Ideal de la Haisse is a 10-year-old gelding by Electro that Endicott has been riding for less than two months, but with Thursday’s victory the partnership is already proving to be a successful one. On Wednesday, the pair placed second in the $5,000 Moon Valley Nursery 1.35m Welcome Stake to kick off the Temecula Valley National Horse Show, and Endicott is excited about his future with the quick and careful mount.

Earlier in the day, Karin Binz’s Meant To Be carried rider Karli Postel to the Green/High Performance Conformation Hunters championship. It is only his first year competing over the 3’9″ fences, but the pair captured the division win with a cumulative 46 points earned over the course of two days of competition. Postel and “Lucky Binz” consistently laid down stellar trips, nabbing the top spot in four of the five classes to earn the tricolor honors. Meant To Be will continue competing during the Temecula Valley National Horse Show with his owner in the Amateur-Owner Hunter division.

After maneuvering to an impressive lead on day one, Haness made no moves to slow down on the final day of divisional riding in the Performance 3’6″ Hunters and Green 3’6″ Hunters. Scoring a perfect 50 and five blue ribbons, Haness and West Coast Equine Partners, LLC’s Saphir swept the Performance classes to clinch the title. Soon thereafter, Haness added to his repertoire of accolades, piloting Kumano, also owned by West Coast Equine Partners, LLC, to the coveted top spot in the Green 3’6″ Hunters, nabbing first place in three of the five classes.

Friday will see a return to competition at Galway Downs for the Temecula Valley National Horse Show, with hunters taking center stage in the afternoon $10,000 Brookway Stables Hunter Derby. In the jumper ring, the $5,000 1.40m Jumpers will bring some of the best horses and riders to the Grand Prix Arena for a shot at the prize.

“I didn’t want to take too much of a chance, more so go around and keep my speed up. I really wanted to set up for Saturday. He’s such a naturally fast horse and I was able to be slick and quick enough through the turns that I could make it happen. From the first jump, I think I had a really strong gallop to [fence] one which was really what I wanted, and to be really efficient all the way around the course.”

“He’s a very naturally fast horse, he likes to carry a bit of pace no matter what happens. I’ve had the ride on him for about a month and a half or two months. I’m still getting to know him a little bit, still forming our partnership, but I’d like to say it’s off to a good start and I’m very pleased with him. He’s fantastic.”

“It’s a fantastic event. I came and checked it out just last week and it looked fantastic. I’m thrilled, it is much better than I even expected. The ring atmosphere is really something new and I enjoyed it. It’s just fantastic.”

“Oakmont Ranch is owned by Gary Broad, who races horses across North America and is a firm believer in good management and campaigning his horses so they retire with a second career, and we wanted to collaborate with Ali and his team, who also own racehorses and sport horses, to bring some attention to the retired racehorses.”

On Meant To Be:

“His name is Lucky Binz, show name Meant to Be, but we call him Lucky Binz because Karen Binz is his owner.  He is 8 years old this year. Last year we were doing the 7-year-old Young Hunters and he was Horse of the Year in the division. I really got to know him last year and this year we have moved into the Green 3’9″ Hunters and started trying some International Hunter Derbies.”

On her opinion of the show:

“It’s great! It’s really nice that it’s smaller and so much more intimate. I think they have done a nice job with the rings. We love that our stabling is 10 steps from the hunter ring so that makes it easy. Everyone is super happy to be here and it’s always fun to be somewhere new.”

On supporting the first year of the show:

“We always think it’s good to support something new and we wanted to come check it out. We [Brookway Stables] are sponsoring the hunter derby this week. Ali Nilforushan is great and I think he’s trying to do a really good thing here. We are excited to be here this week, and all of our amateurs are excited to be here.”