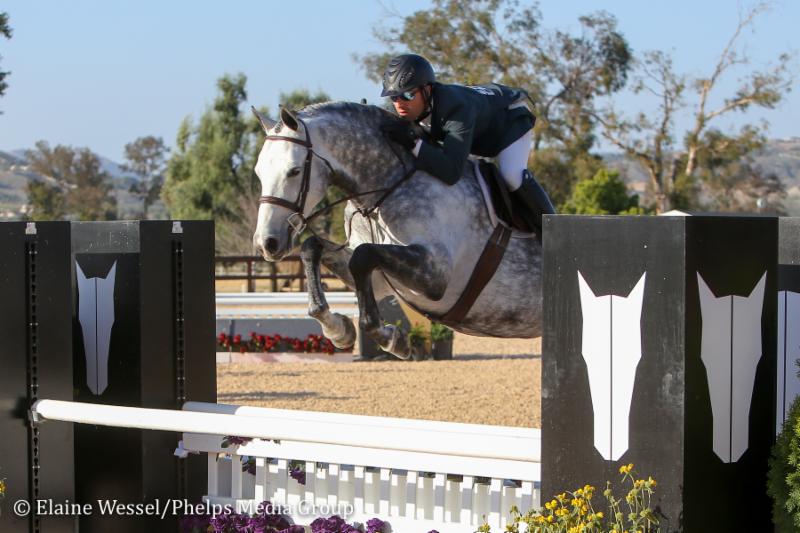 Above: Nicolas Haness and Screenplay

Temecula, Calif. – April 20, 2018 – The hunters took center stage Friday evening at the first annual Temecula Valley National Horse Show as they showcased their skills in the $10,000 Brookway Stables Hunter Derby. With the evening’s high score after two rounds of competition, it was Nicolas Haness aboard Screenplay claiming the top prize and leading the lap of honor. Earlier in the day, John Perez and Emir galloped to the first prize in the $5,000 1.40m Open Jumpers, while Estelle Navet nabbed the win in the Medium/High Junior/Amateur-Owner Jumpers aboard Revann de Lojou.

The $10,000 Brookway Stables Hunter Derby brought the premier hunter contenders to the Grand Prix Arena for a shot at the pot, with Haness and Screenplay ultimately leading the class from start to finish. Boasting a first round score of 94, the pair entered the handy portion as the early frontrunner, with Haness also navigating to the second and seventh positions headed into the final ride on Virginia Fout’s Cristiano and Enchantment Farm, LLC’s Afterglow, respectively. Sitting in third was Hugh Mutch with the ride on Sarah Hellman’s Marble Arch with a score of 87, trailed closely by Jacqueline Attwood Dupont and her own Brave in fourth position with 86 points.

With a cut-off score of 75, the top 12 ranking duos returned to the ring for a chance at either retaining the lead or usurping the leaders. In both the classic and handy round, the unique option fence posed three opportunities: take the left-hand smaller side for no additional points, the middle higher section for 2 bonus points or the inventive duck jump taken from the cross country course on the right-hand side for 4 added points. In the second phase of competition, course designer John Manning’s track asked athletes to maneuver a number of tight turns, as well as trot fence seven, followed by a hand gallop immediately to fence 8 for a bold finish to the final track.

Sitting in sixth position after the first round, Fout and her own Carma were the first to make a significant move up the ranks, adding an 89 to the classic round score of 82 to take over first place with only a few pairs left to ride. Four more contenders took a turn around the ring, but none were able to overtake them until Haness, who has been dominating the hunter ring all week, made his way back in the irons on Screenplay. As the last to return, Haness and Screenplay managed to lay down a foot-perfect trip to retain their spot atop the leaderboard, garnering a score of 84 in the handy phase to clinch the title with cumulative points of 178, just a handful more than reserve champion Fout and Carma, who accrued composite marks of 171 from the judges panel. Jaime Krupnick and Georgy Maskrey-Segesman’s Conux improved upon their initial 78.5 score with an 87 to leapfrog into third place overall with 165.50 points.

In the $5,000 1.40m Open Jumpers, it was Colombia’s John Perez and Daniel Rihan’s Emir who clinched the top spot with a clear round in the speedy time of 56.987 seconds during the one-round speed class. Leaving strides out in the line and using the 9-year-old KWPN gelding’s long stride to make up time, the pair won with a whole second to spare. Susan Hutchison set the pace to beat as the first to compete with Notable, owned by Carolyn Mittler, stopping the clock in a clear 59.771 seconds, which would hold up for third place. Mandy Porter and WT Ca Pow!, owned by Wild Turkey Farm, LLC, claimed the second place honors with a faultless round in 58.560 seconds.

To kick off the morning, Estelle Navet and Revann de Lojou pulled out all the stops to cross the finish line first during the Medium/High Junior/Amateur-Owner Jumper power and speed class, breaking the beam at 28.250 seconds. Brooke Morin claimed both the second and third place awards, placing second with Cornwall, who finished in a time of 29.272 seconds, just one tenth of a second faster than her second mount Cassito Del Diablo.

On Saturday, the highlight event of the Temecula Valley National Horse Show at Galway Downs will be the $40,000 Snapbac National Grand Prix, bringing together the country’s top horse and rider combinations to compete for the lion’s share of the prize money. Amateur-Owner Hunters will kick off the morning, with championship titles awarded in their respective divisions.

On his opinion of the derby class:

“I thought it was a great derby, it was super fun. They added some challenging elements, like the bending line right off the bat. It was all set to a hunter pace, so we could do a gallop and showcase a nice hunter. The Grand Prix Ring in front the VIP Tent has a great ambiance and it is beautiful, so that was really special and it felt so fun to ride here. They did a nice jump with the duck option – I’ve never had that in a hunter class before, so it was exciting to jump that and added an unsure-ness to the first round, but if you took a chance you got some bonus points. I am always one to take a chance, and all my horses jumped it and were good about it. I had a variation of horses in the class – one older horse and a couple younger ones. I was proud of how they all did, and coming back tonight they were all doing the best they could.”

“I imported Screenplay in summer of 2017. I found him in Germany and a client of mine, Sachi Porto of Bonheur, LLC, bought him from me and has been a great owner, taking her time with him and letting him develop into the horse that he is now becoming, which is really exciting. He has won a lot this year; we showed him on the East Coast a little bit in Wellington, [Florida], and he won plenty. He has been awesome all week and is a really great horse all-around.”

On supporting the horse show:

“This is a fantastic facility and Ali does an amazing job. It’s very nice to have a new venue to come to, and everything has been done first-rate. The rings are beautiful, the footing is great and the food is awesome. Supporting a new horse show is something all the trainers in California should be doing. I think each show is going to grow and grow in strength.”

On sponsoring the derby:

“It was a fun class. I like that we were able to make it a little bit different with the bonus jump being 2 or 4 points depending on how you ride it, with varying degrees of difficulty. Having the duck eventing jump was super. It was really fun and almost all of the horses jumped it well – it encouraged good jumping. Most of the juniors and amateurs took a shot at it, and it was nice to see them push themselves.”

On his speed round:

“He’s a slow horse, but he has a really big stride, so in every line I did one less. Since he has such a big stride I tried to change the system. Before I was riding him too slow and now I change the speed a little bit and I am very happy with the horse.”

“I’ve had him for four years, since he was 5 years old, but he has always jumped so high, so I kept him in the 1.30m/1.35m, and last year I took him in a couple grand prix classes. He was good, but he missed a little the 1.40m classes so I dropped him down again and changed his bit, it was not working, so back to the basics.”

“It’s a very nice venue. The footing is fantastic. Ali is doing a great job for his first time with the show, I think it’s going to a really successful show for him.”

“I think the most important thing at a show in the ring and the footing is amazing, very soft, especially compared to other shows in the California. The jumps are amazing because they are different from the ones we usually see and they are beautiful. We’ve had a great time. The course designer is very good. It’s a very good experience for horses and riders, I think everyone improves a lot in that ring. It makes the level higher in California because the other shows see what can be done.”