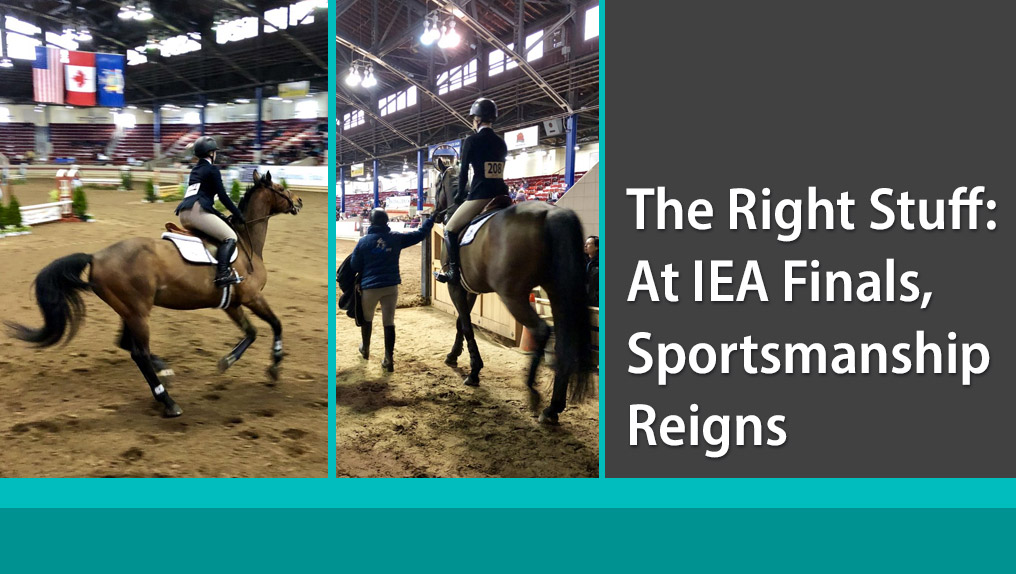 Coffee was a necessity on Friday along the coliseum rail of the IEA Hunt Seat National Finals at the New York State Fairgrounds in Syracuse, New York. Though the start time of 8:30 a.m. was more than civilized by horse show standards, the temperature was just hovering above 30 degrees—meaning the steaming mugs pulled double duty as hand warmers as well as wake-up aids.

Despite the sea of puffy coats and furry boots in attendance, however, the mood was high. Eighteen individual competitors had qualified to compete in the USHJA Varsity Open division, the first class of the day which took place over a twisty, 2’6” course—complete with bending lines with options, a broken track to a long-run oxer, and plenty of tight turns. At the end of the class (and after a quick work-off), the winner would be Zone 1’s Sydney North of Hunter Ridge, followed by Maddie Vorhies (Zone 4) of Legacy Equestrian Team, and Alycia Petrauskas (Zone 1) of Cavalier Farm.

“I’m excited about the level [of rider at IEA Finals],” says USEF/USHJA “R” Judge J. Michael Halbleib of Birmingham, Alabama, who, along with USEF “R” Judge Naomi Blumenthal, will be officiating the weekend. “I think you’re going to see just about the same level of students participating here as you’d see in your local organizations and your A-caliber horse shows.”

The cool temps were responsible for some slight, fresh-horse antics throughout the morning’s classes, and a few riders were forced to contend with draws who scooted home in the landing or picked up speed throughout the course. For Halbleib, who’s been judging IEA and college competition classes for more than 20 years, all this is a natural part of the IEA learning process—and not necessarily a deal breaker when it comes to scoring.

“You definitely have to see the overall finished product from the time [the riders] enter to the time they finish. You can’t allow one particular event to really be something that’s going to separate [them], because there’s probably going to be a lot of minor issues going on.”

IEA, short for the Interscholastic Equestrian Association, was founded in 2002 to improve the quality of competition and instruction for young riders in grades 6-12. Today, the organization boasts more than 14,000 members and 1,400 teams across the country, offering an important stepping-stone for student riders looking to go further in the sport. A series of Senior Scholarships ranging from $500 to $1,100 are offered during Finals for the winners of various classes, while one lucky IEA Hunt Seat National Final Varsity Open Champion earns complimentary placement in the USHJA Emerging Athletes Program (EAP). The biggest benefit for parents, however, might be the IEA’s often-touted selling point: ‘No need to own a horse!’ For a sport that’s long been criticized for its elitist leanings, this leveling aspect of IEA is no small thing.

“I see that the quality of education is there and it’s great that we have been able to include the next tier of participants [in the sport], even if they don’t have their own horses,” says Halbleib. “A high percentage of these riders probably [don’t].”

Another way the IEA distinguishes itself from the rest of the pack? It’s put a premium on good sportsmanship, an idea that filters down to every level of its competition. “Just looking at the prize list, I was taking my highlight pen and going through…and I came to upon the [IEA] Sportsmanship oath,” explains Halbleib.

“The IEA was established to provide competitive and educational opportunities [and] horsemanship and honorable participation are priorities. [For me], this is something that our country’s needed if they want to grow equestrian sports.”

A number of the riders in the morning’s individual USHJA Varsity Open division sported white armbands, signifying their participation in the Victor Hugo-Vidal Sportsmanship Award program, offered to a selected member of each team or each individual rider competing at IEA Finals. At the end of the weekend, a committee of judges announces which rider has demonstrated the most sportsmanlike conduct—which could mean anything from keeping their cool through a tough situation on course, to showing respect for their horses throughout the weekend, to helping out their fellow barn mates without being asked. The winner receives $500 from the IEA and, in the past, up to $1,000 in associated scholarships.

“[The IEA] allows for virtually every student to come into the program, [whether] inner city or private school, you just need a desire,” says Halbleib. “Whatever level you’ve come into the system with, you’re going to come out with a better skill level.

“It’s all-inclusive and they foster a spirit of belonging and an atmosphere of community enjoyment—it’s just one of those systems in which nobody is shunned. It’s the American spirit [at work] and I admire that,” continues Halbleib.

“I admire the fact that the only advantage you have is [if] you put in the time, and you work hard, you’re going to be rewarded.”