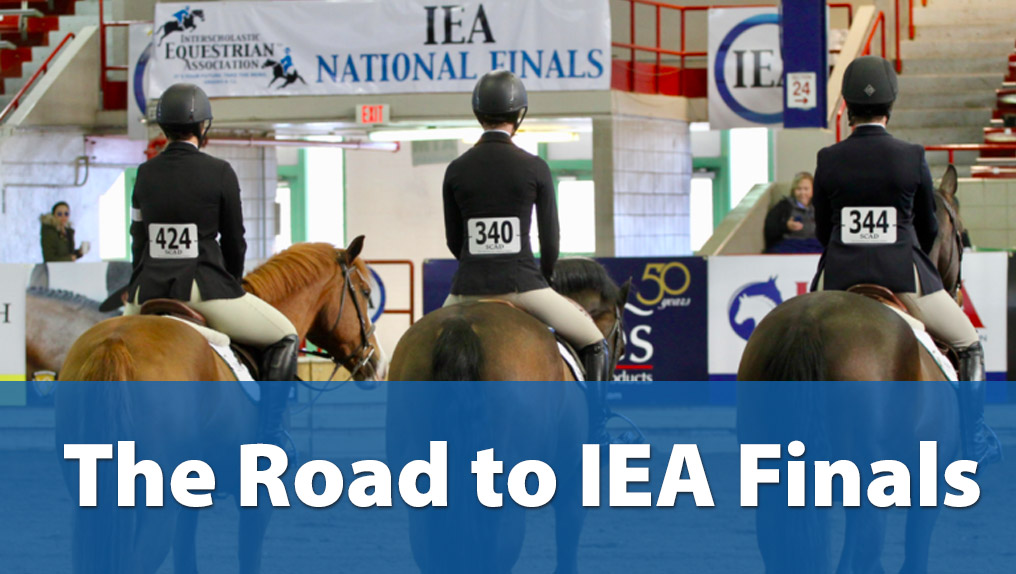 IEA season is a wrap as Hunt-Seat National Finals finished up in Syracuse, NY. Only the top eighteen riders and teams got that far, but what did it take to get there? How much determination and hard work did you actually need to put in to achieve a goal like that?

It all starts in September when the summer shows are coming to an end and the IEA season begins. Equestrians will stop riding their usual mounts and begin riding different horses, preparing themselves for all kinds of situations during the upcoming months. Competitors will begin planning their barn’s IEA shows and studying for horsemanship exams. IEA effects all riders in one way or another. For me, it was the way that I think about showing. For others, it may be the fact that we really take our horses for granted. Whether you joined to show more, or to get experience showing on another horse, IEA helps everyone. Not only does it help the people who couldn’t show otherwise, but also those who regularly compete on the A circuit.

In IEA you generally compete a level or two below what you would on a mount that you are familiar with. If you generally compete at 2’6”, you would compete in 2’ or maybe crossrails. There is constant encouragement to keep trying and to get to a higher level, just as there is during the summer show season. Riders always strive to be their best self.

During my time at Nationals this year, I realized that team values are such a big part of riding, and as equestrians we don’t realize this often enough. IEA requires all of the riders to come together as a team, which is all too rare in the equestrian world. At many shows during the year, you are competing as an individual, for yourself and your horse. IEA brings together people who might otherwise never meet. This year, my barn’s IEA middle school team qualified for Nationals. As you can guess, it’s a bit of a big deal to qualify as you must first qualify for Regionals, and then Zones. Only a few teams per zone qualify for Nationals.

This past weekend, I had the privilege of interviewing Ms. Roxane Durant, one of the five IEA founders. I asked her what qualities helped someone get to IEA Nationals, and she said two things: Practice, and a sense of humor. Why, you may ask? Practice is the more obvious quality. The more practice that you have, the better you will be as a rider. The better you are as a rider, the better you will (hopefully) do in competition. A sense of humor is a quality that is more rare in the equestrian world. You can be an amazing rider and have a terrible sense of humor. But why does this effect your chances of getting to Nationals? Or even Regionals or Zones? The answer is more simple than it seems. If you aren’t able to take a joke, you aren’t going to be able to get over your fails. You won’t be able to get over your mistakes, and this will in turn make you a worse rider than the people who are able to laugh about their mistakes and correct it the next time.

These traits can be applied in any show ring, and even in non-riding situations. If you are a determined rider with a reasonable level of ability and a good sense of humor, you can get much farther than you might get otherwise. From what I have learned, these people are more likely to make it to a National competition, or even a regional competition. If you aren’t doing as well as you’d like this season, you should ask yourself if you have these traits that have been said to help riders to advance and succeed.