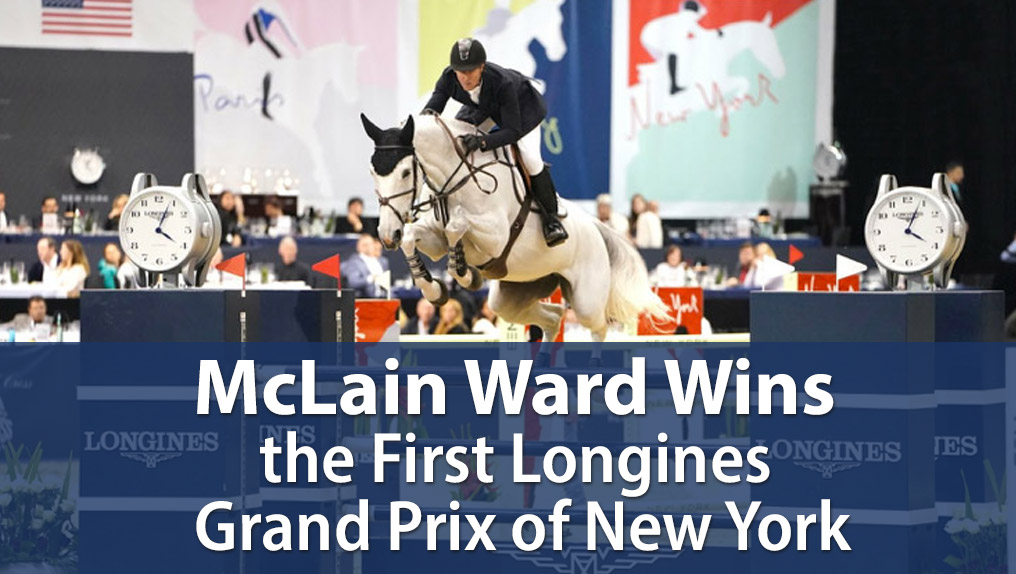 McLain Ward clinched the victory in the very first CSI5* Longines Grand Prix of New York with his own Clinta on the last day of the competition’s inaugural week. Hailed a “hometown hero,” the New York native outrode a field of top competitors from ten countries around the globe for a victory he described as “extra special.”

Ward acquired the eleven-year-old gray Oldenburg mare in the beginning of 2018, and the Grand Prix at the Longines Masters of New York was only the pair’s third show together. When asked about this new superstar mare, Ward replied, “I finally was able to purchase her with a lot of effort this January and got her late February… it was a lot of determination. I think I called the previous owner every Tuesday and often got the answer, ‘No, there’s no deal.’ until finally, I got a deal. I believed in her and it’s great to see her showing all that I thought she could be.”

On his strategy for the week, Ward explained, “I didn’t run her earlier in the week and was aiming for the Grand Prix. [It] was a good place to take a bit of a chance. She’s so careful; she really doesn’t want to hit the fences…. I thought, ‘Ok, just stay on it and don’t make a big mistake.’ The horse really was there for me.”

Fredricson, currently ranked third on the FEI Longines World Ranking list, noted that “It’s always difficult to beat McLain. He’s always quick, [but] I was really happy with my round [and] my horse jumped fantastic.” Fredricson praised the organization of the competition as a whole for riders and spectators alike, noting the uniqueness of the atmosphere. “As a rider, it’s fantastic to be here. You really feel the crowd… you get really good contact with the people in the audience. I really enjoyed my time here.”

Ballard had a remarkable week at the Masters, with multiple clear rounds and podium finishes. The first in the ring for both the first round and the jump off, Ballard held the top spot on the podium until Ward and Fredricson’s rounds. “This is my first [Masters], and I would say this is a career best for me from start to finish. New York has always been good to me… I was hoping for two top 10 finishes and I got three podium finishes. There’s not much more you can do than that.”

Congratulations to all of the competitors and the entire team at EEM/The Longines Masters on an incredible inaugural year. See you next year, New York!