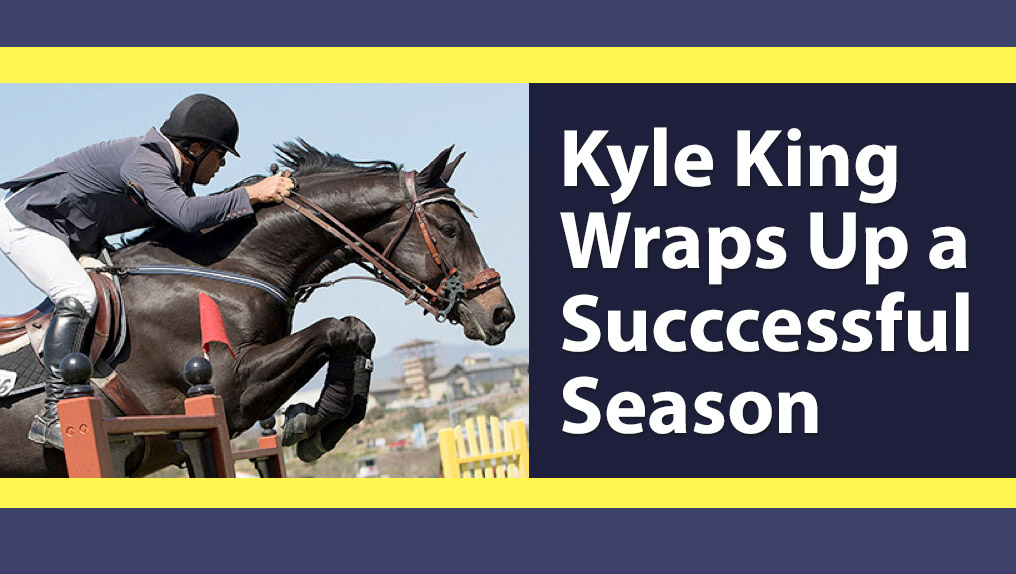 Ever since a young age, Kyle King has proclaimed himself a professional rider. “From the age of about ten or eleven on I pretty much worked as a professional rider,” King explained. With a professional horseman as a father, King grew up in the barn whether it be riding or doing barn chores. In his younger years, he found success in catch riding and became a go to for people who needed help. Now with 30 years of a professional career under his belt, King continues to show his riding abilities with countless wins and top place finishes.

Just a few weeks ago, King ended the 2018 winter show season with a win in the $25,000 Markel Insurance Qualifier at Blenheim Equisports. The victory came from his ride aboard Escudo’s Triumph, a prior dressage horse owned by Stuart Belkin. The pair had the advantage of going at the end of the jump off, but Escudo’s big stride and ability to go fast across jumps combined with King’s riding helped them to the victory. “He’s a very consistent jumping horse. He’s gotten a lot of clean rounds in the past year and a half,” King explained about Escudo.

King’s season ended with success, but he also maintained that throughout the year. “I’ve had a fantastic season with just all my horses. I don’t know if I’ve ever won as much as I have this year,” King exclaimed. King found victory and top place finishes during the past few months in Southern California at shows like HITS Coachella.

Looking ahead, King and his team plan to head up the coast to Langley, British Columbia in Canada, where he is also in the process of becoming a Canadian resident.

With a promising string of young horses, a good staff, and clients beside him King will attend shows such as Thunderbird and Spruce Meadows after giving the horses a month off. His goals for the summer focus on putting miles on his young and developing horses. “My biggest focus this summer is to continue trying to develop these young horses to the highest possible level,” King said. He also hopes to bring his young stallion into the Grand Prix level.

A self-proclaimed old school horseman, King runs his business alongside his wife, Emily King. They keep a string of anywhere between fifteen to twenty horses, where the ultimate goal is to bring the horses along and eventually sell them if they are ready to be sold. They spend seven days a week with the horses and live the equestrian lifestyle. “There’s not a moment we’re not at the barn or with these donkeys,” King expressed.

Kyle King is looking forward to a successful summer and career for the years to come. “It’s been a few years since I’ve competed at the highest level,” King noted. “However I’m not done yet. I still have intentions of building a string that’s capable of competing overseas and internationally.”