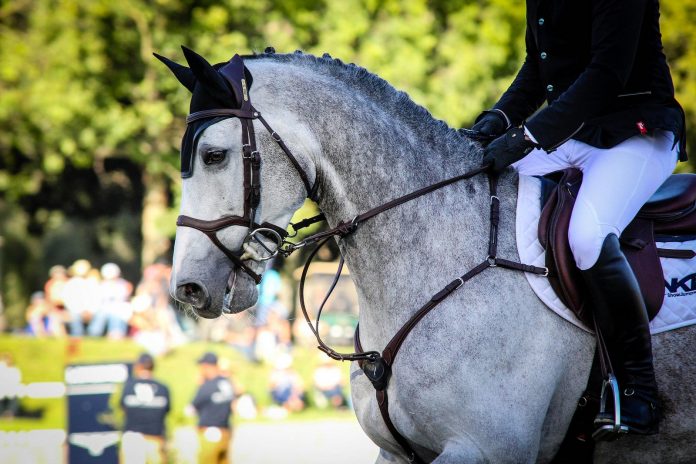 On May 4th and 5th, the Del Mar Grandstand Arena was the place to be!

The $25,000 Surfside Grand Prix (presented by The Competitive Equestrian) took place on Friday, May 4th. This qualifying round would determine the competition of 27 riders for Saturday’s famous $100,000 Grand Prix of Del Mar. 49 finalist riders rode a single course with the goal of a fast, clean round.

The course, with options for inside turns and strides, proved appropriately challenging. The 74 second time allowed bested nine horse-rider combinations, and the “bogey jump”– a wall shaped like the United States– proved a difficult task to more than a few.

The next day, the Del Mar Grandstand Arena buzzed with excited energy. It was the day of the crown jewel: the $100,000 Grand Prix of Del Mar, presented by Pacific Sotheby’s International Equestrian Division.

For the first round, the competitors, in reverse order from the Surfside GP results, navigated a tricky course of 13 obstacles 1.50-1.60 meters in height (designed by Olaf Petersen Jr), which included a tight two-stride triple combination, a lofty triple bar, and the same intimidating wall from the previous day. This time, the daunting American wall did not turn out to be the “bogey jump.” Instead, the 5a, b, c triple combination racked up faults for many competitors. Fence 6, a tall, narrow vertical shaped like a bicycle, was also a challenge. In addition, the last line could be done in a collected six or forward five strides, and many competitors made a late decision that often cost the back rail of fence 13. The spectators were thoroughly engrossed in each round, which added to the tension and the excitement. There were thundering cheers after every clean round accomplished.

The nine riders who pulled off clean rounds made it to the jump off, which would be carried out in reverse order from the first round standings. The jump off had many places to gallop forward, as well as three options for extremely daring turns.

Nicole Shahinian-Simpson and Akuna Mattata (owned by Silver Raven Farms) kicked off the jump off with a fast, clear round of 43.186. They did not max out on the galloping portions of the course, but they executed all the tight turns. Next, Richard Spooner and Quirado (owned by Richard Spooner and Guy Mc Elvain) took the lead with a clear 41.801, again choosing not to go for broke on the long stretches, but making all the slick inside turns. Sayre Happy and New York (owned by Evergate Stables LLC) had two unfortunate rails at the 5a 5b combination, but they had a fast time of 41.469.

Laura Hite and Calypso VD Zuuthoeve (owned by Laura Hite) had a clear round of 45.142, executing the course spectacularly but opting for the wider turn to the 5a 5b combination. Kenneth Vinther and Colicchio (owned by Kenneth Vinther) had a harrowing clear round of 39.588, taking strides out wherever possible, rewarded by the eruption of cheers as Colicchio took the long spot, flew over the last red oxer, and stole the lead. Guy Thomas and Jonkheer Z (owned by Emily Livermore) jumped to a very close second with a thundering, fast clear round of 40.131.

Then, Carly Anthony and Clochard (owned by Neil Jones Equestrian Inc) took the lead with an impeccable clean round of 38.684. And then, unbelievably, Michelle Parker and Cupilor rose to the top of the leaderboard by a few tenths of a second with a clean round of 38.105, inching out her competitors with the tightest turns and least strides possible. Mandy Porter and Milano were the very last to go, and the anticipation was palpable. Fences 1 to 3 were neck to neck with Parker, and then fence 4 brought a heartbreaking rail, but the two ended the course on a strong note and finished eighth. 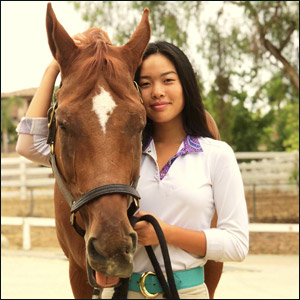 About the Author: Carly Phoon is a junior at The Bishop’s School in La Jolla, California. She enjoys writing, drawing, producing music, scuba diving, and competing in the GSDHJA show circuit with her lease horse Finale. Horses have always been an essential part of her life.

From the Ground Up: 5 Benefits of the SoftBed Comfort Stall...