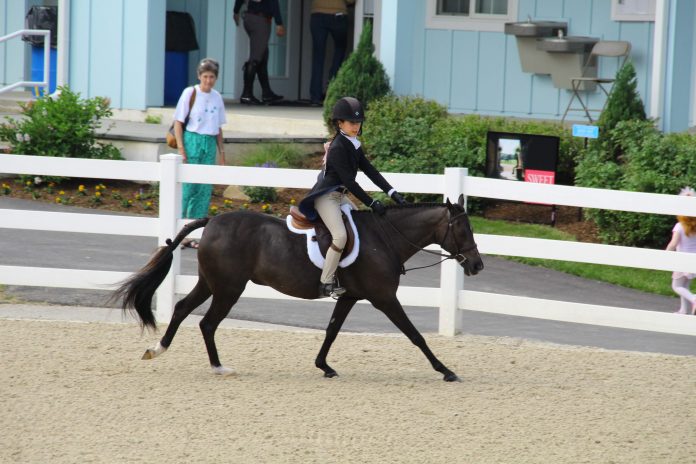 Stella, Juliette, and Clara Propp are a trio of siblings hailing from New York, New York. Stella, 15, competes in the 3’3” junior hunters aboard Maraschino, Morocco, and Neato, in addition to the children’s jumpers aboard Wirma. Juliette, 13, competes in the medium pony hunters with Silly Putty and Heart to Forget, as well as the children’s hunter horse division aboard Premium Blend. The youngest of the family, Clara, age 11, shows in the small pony hunters with Benlea Mizzou, the small green ponies with With Love, and the Large Pony Hunters aboard Newsday.

All three sisters train with Brianne Goutal out of Brianne Goutal LLC, and each began riding at just four years old. The Plaid Horse caught up with the sisters at the annual Devon Horse Show to discuss the prestigious event (where Clara piloted Benlea Mizzou to top ribbons in the small ponies, and Juliette rode to top ribbons with Heart to Forget in the medium division), and to hear what it’s like to show with your siblings.

What is it like to compete with your siblings?
“You would think that there could naturally be some tension between us, especially when showing in the same divisions, but there really isn’t. Obviously, as sisters, we argue normally, but never over riding. No matter what, we cheer each other on and are always the biggest support system to one another.”

Juliette: “My first time at Devon was last year in the small ponies with Benlea Mizzou.”

Clara: “I also showed at Devon for the first time last year, and did the small pony hunters with Juliette on Everyday Enzo and Quicksilver Butterfly.”

Why do you love Devon? What makes it so special?
“Devon is such a cute little community, and has the fair, amazing food, incredibly talented horses and riders, fun shopping, and such amazing people and friends to share your experiences with. It is such an honor to even qualify for Devon, and to be surrounded by some of the best competition in the country.”

What are some of your favorite things about Devon?
“Our favorite aspect would definitely be the competitive nature of the show; because it drives us to perform the best that we can. Also, the food is amazing. We especially love the tea sandwiches and the lemon sticks! The people around us and in the crowd are also so sweet and fun to be around. We love Devon so much, and hope to qualify and come again next year!”