Home Blogs Barn Lounge How to Add Pizzazz to An Equestrian Themed Party (Without Breaking the... 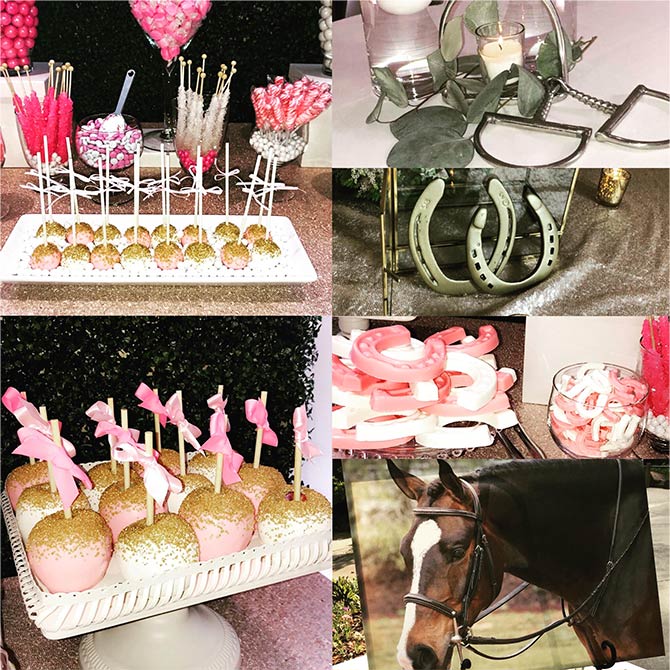 I recently hosted a party for my horse-crazy daughter. Before I really got started with party planning, it was important to me to settle on a theme. I always find that organizing an event around a great theme makes it a lot easier overall to coordinate the various design elements. Since the party was scheduled for May, I initially considered a friend’s suggestion for a Kentucky Derby theme but ultimately settled on an “Equestrian in the Garden” theme that would allow me to incorporate the botanical garden setting I chose for the party location.

Early on, I made the decision to hire an event planner. I realized after initially researching and reaching out to a number of vendors myself, that the event planning and logistics were simply not something that I could manage alone. I hired a fantastic woman named Christina Turner whose business “Charming the Carolinas” located in Landrum, South Carolina (only minutes from Tryon, North Carolina and the Tryon International Horse Park where the World Equestrian Games will be held this coming September) could assist me with everything I needed.

Hiring Tina was absolutely the best decision I could have made! It allowed me to focus on only those tasks that I selected, and permitted me to delegate all other coordination and creative efforts to her. As a busy working Mama, it was comforting to know I had a planning partner who really knew what she was doing and was excited about our venue, theme, and making this party something incredibly special for my daughter.

My daughter and I have ridden hunters for years, and like many horsey families, we had a ton of old and unused bits, outgrown boots, helmets and irons lying around our house. Tina did a fabulous job incorporating many of the various horse related items I already had (and some that she borrowed from friends) into the decorations at the party. She also purchased some cheap horse shoes and spray painted them gold to use as part of the centerpieces on many of the tables and incorporated these gold horseshoes into several decorations she created (such as a boxwood wreath with a golden horseshoe in the center).

As part of the party décor, I printed out some of my favorite photos of my daughter and her pony using an app called “Mixtiles.” This app allowed me to send photos to the company to create 8×8 square photos (three tiles with free shipping for $49, and every additional tile is $9) about one inch thick that have adhesive on the back and stick and re-stick to almost any wall surface without damaging the wall. Tina used these tiles on a large blank wall over the cake table, and I was able to easily take those tiles down after the party and re-use them by sticking them to a wall in my house.

In addition to the Mixtiles, I also used “Canvas People” to print out three 16×20 photos of my daughter and her pony that were incorporated into the party décor at various places. Canvas People regularly has some amazing sales, so be sure to check them out if you are looking to blow up some of your own great photos!

In addition to the décor and sweets, I was also able to keep with the theme by designing my invitations at home using Shutterfly. I simply chose some of my favorite horsey photos of my daughter and created the invitations myself. I also decided to serve a signature alcoholic and non-alcoholic cocktail during the party. We called the alcoholic beverage a “Palmetto Pony” (a play on the traditional Moscow Mule) and the non-alcoholic beverage “Lainie’s Luck Dragon” (Luck Dragon is the name of my daughter’s current pony). Tina created adorable horse topped pink and gold swizzle sticks to use in the drinks. The drink names and swizzle sticks were just another fun way to incorporate the theme into the party.

No matter how big or small your event may be, there is no need to spend a ton of money on decorations for an equestrian themed party. In lieu of real flowers (that can get pricy) many local hobby shops often have sales on fake silk flowers… or perhaps your trainer will let you borrow a few from some of your favorite jumps?

You can also easily start saving old horseshoes from farrier visits. When preparing your decorations, it takes very little money to spray paint old (cleaned!) horseshoes. And, if you aren’t a tack hoarder like me, you likely know someone who is and can borrow some bits, irons, boots and hunt caps to help you finish off your party look.

As you can see, adding a bit of pony pizazz can be pretty easy and doesn’t need to break the bank! In fact, it might be as easy as looking around your own home, garage or barn to see what you can use to bring a touch of equestrian class to your special event!

Ribbons are Not Everything or 23 Reasons Why We Really Show