Home Blogs TPH Book Review: A Racing Scandal On the Tracks Shapes Into... 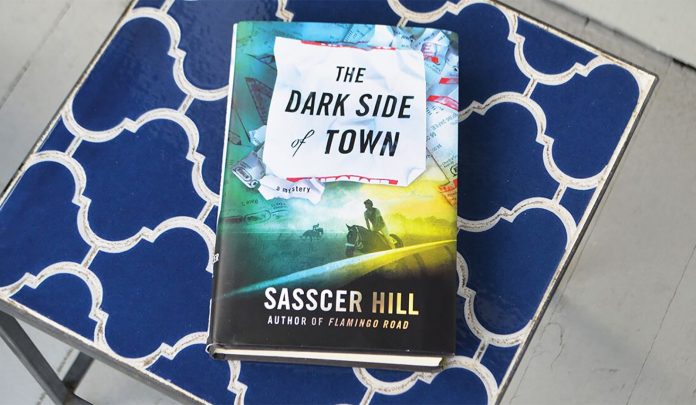 Author Sasscer Hill strikes again with a new murder mystery intertwined with life on the race track. Her new novel, The Dark Side of Town, is no exception. It is a stand out just like her exciting previous works, The Nikki Latrelle Racing Mysteries series and Flamingo Road. Set in the present day, main character and ex-cop, Fia McKee takes on an undercover position for the Thoroughbred Racing Protective Bureau, in an effort to uncover the workings of Saratoga’s infamous mobsters.

Fia McKee scores a job as a hot walker for Mars Pizzuti, a suspect of the TRPB. Mars and his mobster friends seem guilty of participating in scams with funding and betting. Not only that, but he is famous for firing up his horses with steroids and filling out false workout statements. Fia reunites with fellow undercover agent, the handsome Calixto Coyune. Fia and Calixto take on the mission together, but their relationship goes beyond work. This is the not the first time she has worked with him and her admiration for him only becomes stronger and more passionate. Not only is her crush on Calixto haunting like the Victorian house she is staying in, but her mom also tries to reunite with her after seventeen years apart. As a daddy’s girl she is reluctant to make amends with her mother who abandoned them for a wealthy racing mogul.

As Fia grapples with pursuing her feelings for Calixto and rebuilding her relationship with her mother, the investigation only grows more twisted. The reunion with her mother proves to be deadly. Matt Percy is brutally murdered at a cocktail party hosted at Fia’s mother’s home. Fia begins to see many patterns of pressure and lethal behavior. Mobsters will kidnap, murder, and steal to guarantee money and fame.

Fia builds a personal relationship with young jockey Stevie Davis whose life is at risk if he wins the race. The mobsters kidnap his younger sister and hold her captive in the Adirondacks. Fia stretches from her heroic duties of saving a young girl to rescuing Ms. Jamaica from domestic violence at the hands of her mobster boyfriend in Saratoga. Yes, sounds confusing, but all will be explained in the thrilling novel.

From suicide to murder to kidnapping, The Dark Side of Town always shocks when you least expect it. Action pervades the book; you will find yourself flipping through pages faster than a racehorse runs.

An Open Letter to Our Non-Equestrian Friends