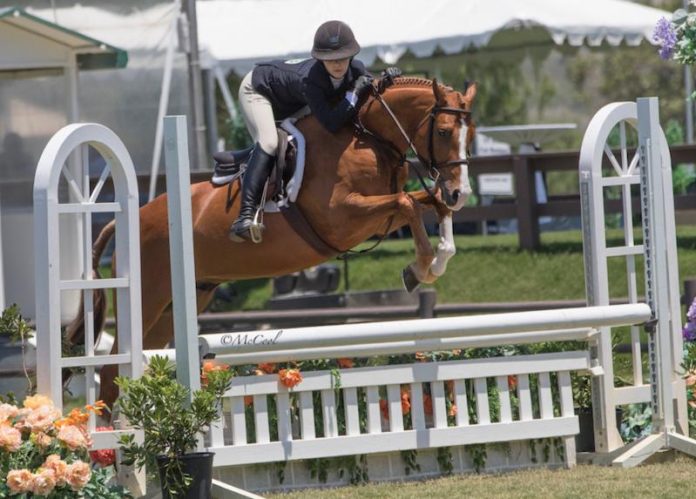 June 25, 2018 – San Juan Capistrano, CA – Starting with the American Tradition of Excellence in Equitation on Monday to crowning the West Coast Green Hunter Pony Grand Champion on Sunday, the third week of the Blenheim EquiSports June Series had a unique combination of competition, education and social event happenings. The small, medium and large ponies walked on to the Pacific field on Wednesday afternoon for a model clinic and the pony plethora continued for division competition, classics and derbies, as well as a horsemanship test, lots of tasty treats, and special awards into the weekend.

WEDNESDAY: Pony Hunter Model Clinic, sponsored by Balmoral
On Wednesday afternoon, nationally recognized trainer and judge, Carleton Brooks, along with his wife, Traci, hosted the first pony event of the week. Riders of all ages and pony divisions were able to bring their mounts to the Pony Model Clinic to learn tips and techniques. “We wanted to do something special for the pony riders. Our goal was to help them understand why we model, what the judge is looking for, and how to make the best of their particular pony’s traits. The kids were great and it was fun to watch them in the models the next day using what they learned,” commented Traci and Carleton Brooks. “We’d like to give a big thanks to Michele Decker, Blenheim EquiSports, and all the kids, trainers, and parents for making it a lot of fun!”

After the clinic, all participants were invited to a reception. Snacking on chips, veggies, and fruit was tasty, but the most popular options by far were the pony-shaped sandwiches and sugar cookies. Everyone had a blast decorating the sugar cookies with all kinds of icing and sprinkles. Carleton Brooks then quizzed the group on topics that would help them prepare for the Emerson Burr Horsemanship Test on Thursday afternoon. Certainly a fun and educational experience, hopefully this clinic will be the first of a new tradition at June Classic 3. Congratulations to the highest-scoring test takers: Remy Baker topped the 8 & Under age group; in the 9-11 section, it was Charley Stowell who scored the highest, and Peyton Dopf was best in the 12-14 section and also earned the overall high score. They each received a $100 grant towards riding expenses from the Emerson Burr Horsemanship Fund, and for earning the highest score overall, Peyton Dopf won a pair of MDC Pony Stirrups.

After test-taking, everyone was invited to enjoy a Cupcake Party. Something sweet after a big day on and off the ponies!

THURSDAY & FRIDAY: West Coast Pony Hunter Champions
After two full days of model, under saddle, and over fences classes, Gabrielle Sokolow and Kim Wolf’s Galianna won four out of five classes. Their success earned the pair the most points of the small, medium, and large sections to claim the Overall Grand Championship title in the West Coast Pony Challenge, presented by USHJA Zone 10. Along with the title, Sokolow’s name will be added to The Perpetual Trophy, donated by Willow Brook Stables. With the impressive collection of blue ribbons, thirteen-year-old Sokolow wrapped up the Medium Pony Hunter division with 42 points, picking up the division Championship in addition to the overall grand honors.

The Reserve Championship in the Medium Pony Hunter division was earned by Skylar Wireman and Kelly Covey’s Whispering Mikado. The pair earned a total of 12.25 points. “He is a very fun pony to ride and is very fancy. I have been riding him since he was barely broke and have put a lot of work into him, but he has taught me a lot. We competed at Pony Finals in Kentucky in 2016 during his Green Pony year.”

Recognized as the Overall Reserve Grand Champion as well as division Champion, Shiloh Roseboom and Enchantment Farms, LLC’s Buzzworthy accumulated a total of 29 points throughout the two days of competition in the Small Pony Hunters. With her other small mount, Heavenly Patch of Blue, also owned by Enchantment Farm, LLC, Roseboom earned the Reserve Championship of the Small division with a total of 27 points.

In the Large Pony Hunter division, Pretty Penny Farm’s Benetton, also ridden by Sokolow, was crowned Champion with a 28-point total. Imagine That and Sienna Gustafson picked up the Reserve Champion title for their 14.5-point total.

Roseboom spoke fondly of Heavenly Patch of Blue by her barn name. “Anna is a great jumper and is a lot of fun to ride.”

After also earning top honors in the West Coast Pony Challenge on Buzzworthy, she noted, “Showing out here on the grass field is an exciting opportunity for the ponies to show in a bigger ring. This whole week has been a lot of fun.”

For earning a score of 85, Maci Anderson and Balmoral Farm Inc.’s Happy Place picked up the The Plaid Horse Winning Rider Handy Round Award, including the adorable Stanley pony.

The Makoto Farm Best Turned Out Pony Groom’s Award went to Jose Flores for his work on Brownland Miss Kimmy, ridden by Shiloh Roseboom and owned by Noelle Wolf.

Awards weren’t the only reward at the Pacific Field on Saturday. Spectators, officials and competitors alike enjoyed a sweet Ice Cream Social while watching the Derby, hosted by Blenheim EquiSports. Options included popsicles, ice cream sandwiches, or a build-your-own sundae. Even the judges participated in the event, picking up some ice cream treats to help them cool down from the hot derby competition!

SATURDAY & SUNDAY: West Coast Green Pony Hunter Champions
On Saturday and Sunday afternoons, green ponies of all sizes took to the grass field to compete in the continuation of the West Coast Pony Challenge, presented by USHJA Zone 10, and it was Skylar Wireman who emerged as the overall winner with Neon Moon. Wireman and Balmoral Farm Inc.’s small pony accumulated a total of 39 points over the two days of competition, winning four of the five classes in their division. They won the Small/Large combined Green Pony Hunter section in addition to earning the Overall Grand Green Championship.

“Neon Moon is very straightforward and fun to ride. This was only my second time competing with him, and we had an amazing weekend out on the grass field,” Wireman said.

Tessa Buchanan piloted her own Rose Gold to the Overall Reserve Grand Green Championship, finishing with a total of 32 points accumulated in the Medium Green Pony Hunter division. They won the division as well.

Last, but certainly not least, is a thank you to Outdoor Outfitters for sponsoring all the beautiful West Coast Pony Challenge scrim sheet awards. “We’re happy to make this week as special as possible for the kids competing, their parents and their trainers,”said Outdoor Outfitters owner Tonia Looker. “The pony kids are the future of our sport. It’s rewarding for us to applaud their success.” Ponies take the grass stage on the Ortega Field next Saturday morning for the $5,000 USHJA Pony Hunter Derby, presented by Markel Insurance. After the victory gallop and derby prizes are distributed, the Makoto Farm Circuit Pony Derby Award will also be awarded.

Photos by McCool and Blenheim EquiSports

Zones 3 and 4 Ready for Zone Jumper Team Championships in...