Home Blogs Is Regenerative Therapy Right for my Horse? 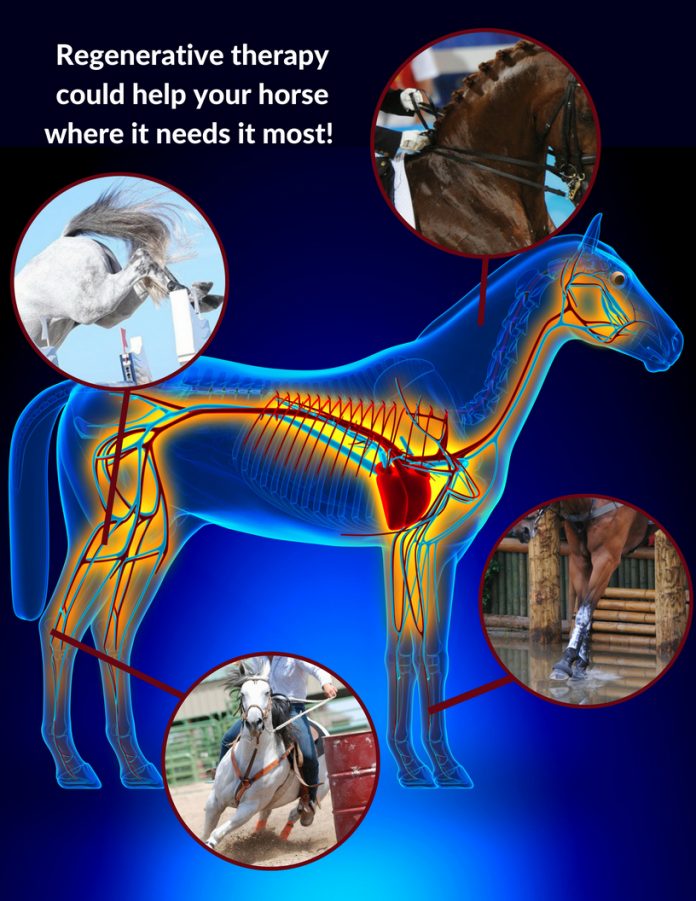 For the last decade, the use of regenerative therapies for horses has seen an exponential increase. Today, regenerative therapy options such as MediVet Autologous Conditioned Serum (ACS), Interleukin-1 Receptor Antagonist Protein (IRAP), and Platelet-Rich Plasma (PRP) are all highly prevalent treatment options. However, for the majority of equestrians, the question remains: is regenerative therapy right for my horse?

To answer that overarching question, think about these two questions: Does your horse have a tendon or ligament injury? Does your horse suffer from any inflammatory disease such as arthritis, laminitis, gastritis, tendonitis, colitis, synovitis, or… (you get it; the list goes on!)? If you answered yes to any of those, the question is already answered. It’s highly likely that regenerative therapy could be a beneficial solution for your horse!

But rather than simply stopping there, it is important to understand why and how regenerative therapies, specifically a product like MediVet ACS, work for your horse’s benefit.

Injuries and Inflammation – The Root of the Issue

First, it’s important to understand the issue that you are trying to address.

In horses, injuries, joint damage, wear and tear from training and competition, infections by bacteria or viruses, and even some allergic reactions all have at least one thing in common: their ability to provoke inflammation.

This inflammatory response is part of the horse’s body’s natural attempt at self-protection and healing. However, even in the case of microscopic inflammation, the healing process will not start until the inflammation process has finished, and ultimately the inflammation can be far more harmful than the initial stimulus (the trauma, injury, or invading organism) itself.

Here’s why (and here’s where things get a bit more complicated!): When inflammation occurs, chemical components from the body’s white blood cells and elsewhere are released into the blood and the affected tissues to attempt to protect the body. These cells either contain or produce more than 100 chemical mediators of the inflammatory response, including numerous inflammatory cytokines. The release of these mediators increases the blood flow to the area of injury or infection, which in turn can cause redness or warmth, and, due to an increased number of cells and inflammatory substances in the area, irritation, swelling, and ultimately pain.

In the horse’s joints, the swelling caused by inflammation can lead to the deterioration of the cartilage, joint damage, and arthritis (quite literally defined as inflammation of the joints). Elsewhere, it can become laminitis, gastritis, tendonitis, and any number of inflammatory diseases. Fortunately, that is where MediVet ACS can help.

With the MediVet ACS process, the horse’s blood is drawn and sent to the MediVet lab, where unnecessary components of the blood are spun out, and a patented LED photobiostimulation technology is used to generate the ACS. This low-level light process, along with specially coated glass beads, result in the induction of anti-inflammatory cytokines, the inhibition of the pro-inflammatory cytokines, and the upregulation of growth factors.

However, while only the IL-1ra is induced during IRAP processing, MediVet ACS is the only regenerative therapy option of its kind to additionally induce four powerful anti-inflammatory cytokines, including IL-4, IL-10, and IL-13. This means that MediVet ACS is doing more to block and terminate inflammation than any other regenerative therapy, making it one of the safest and most powerful anti-inflammatories available!

“It’s the IRAP 2.0 if you will,” said Dr. Bryan Dubynsky of Palm Beach Equine Clinic in Wellington, FL, who started using MediVet ACS two years ago. “MediVet has found a way to get more interleukins involved. We have known there are a lot of interleukins working other than IL-1, but now we have proteins from more interleukins and are blocking more of the inflammatory mediators.”

That’s not all though. There’s another reason MediVet ACS could be right for your horse: it can be given intravenously.

What makes that special? Any of the other options currently on the market are typically administered directly to a specific joint through a sterile injection given by a veterinarian. These injections provide benefit to that specific problem area.

The ability to also be given intravenously means that MediVet ACS can not only help the horse’s joints, but it can also go where the horse needs it most, countering the various inflammations that occur throughout the horse’s body. These IV injections also allow for systemic, preventative care that fights lameness, aids in whole horse health and wellness, and provides a natural way of managing pain and inflammation!

“Another benefit to these regenerative therapies is that you have a total dose limit of corticosteroid you can put in a joint,” continued Dr. Dubynsky. “With MediVet ACS, you don’t. You can put it in as many joints as you want. You start to see improvement in 48 hours, and I have seen the level of that improvement significantly higher with ACS over traditional IRAP.”