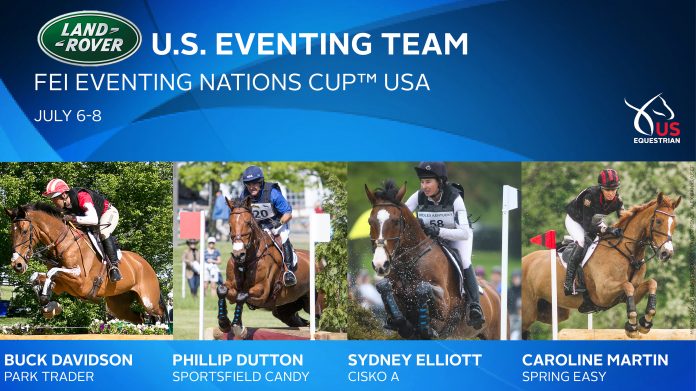 The Plains, Va. – The Land Rover U.S. Eventing Team will contest their second Nations Cup of 2018, the FEI Eventing Nations Cup™ USA at the Brook Ledge Great Meadow International presented by Adequan®. Chef d’Equipe Erik Duvander will lead Buck Davidson, Phillip Dutton, Sydney Elliott, and Caroline Martin in the competition from July 6-8. The team is a mix of veterans and rising stars with hopes of gaining valuable experience under Duvander’s guidance and with home crowd support.

Dutton and Sportsfield Candy finished second in the Jersey Fresh International CIC3* in early May.

Elliott and Cisko A finished third in the Chattahoochee Hills CIC3* in April.

Find out more about the Brook Ledge Great Meadow International presented by Adequan.

Additionally, a combined test for the Land Rover U.S. Eventing Squad for the FEI World Equestrian Games™ (WEG) Tryon 2018 and reserve list combinations in attendance will take place Friday, July 6 and Saturday, July 7. The athletes will use the combined test as a preparation event for the WEG.