Home Press Release Jennifer Brennan and Gavin Moylan Ride Away with Top Finishes in the... 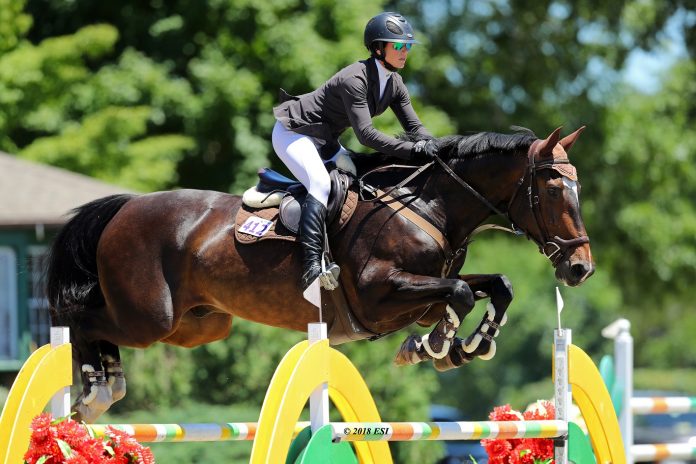 Hunter, Jumper, and Equitation riders return to HITS Commonwealth Park for another week of USEF-Rated Show Jumping Competition. The Showday National featured over 400 classes, including qualifiers for the Marshall & Sterling Insurance League Finals and the HITS Championship, and of course the featured $20,000 ULCERGARD Open Prix. Riders would trot away with blue ribbons, championship titles, and smiles on their faces.

Professionals were ecstatic to be back at HITS Commonwealth Park to kick off the July Series. Ken Krome, USEF and FEI Course Designer and Judge, travelled from his farm in Westminster, Maryland to show at the Showday National in Culpeper, Virginia. Krome stated, “It was beautiful here this week. Rian Beals (Manager and Technical Coordinator) did a great job. The show grounds look the best it ever has and the footing was tip top in every ring.” Krome had riders with top finishes in Hunter, Jumper, and Equitation classes. “From the schedule, to the in-gate staff to the office, everything ran smoothly and we’re looking forward to another great week,” Krome said, expressing his excitement for the show this week.

Ian Silitch, a well-known trainer and rider in Virginia, now based out of Ocala, Florida said, “Culpeper really is a hidden gem! We came early this week, and everything was ready to go from the start. We could have started showing on Monday!” Silitch continued, “Coming to Culpeper always puts a smile on my face – it’s like coming home. The footing was perfect, the stabling is some of the best in the country, and the staff did a great job. The course designer got it just right on Sunday and [Rian] Beals has really taken the reins, and is always friendly and approachable.”

Randy Johnson, of Greener Pastures Equine in Clarksburg, Maryland, had a first and third place finish in the Junior/Amateur Jumper Classics on Sunday. Earlier in the week, he was reminiscing with Kristen Vale-Mosack, Show Office Manager, about their time showing here in the 1980’s. “It was so nice to be in Culpeper this week, especially for those of us who feel like we grew up here!” he said. We couldn’t agree more, Randy!

In the Grand Prix Ring, riders jump-started the week with the $5,000 Open Welcome. Kicking the week off with a win was Melissa Runderhausen aboard CHARMEUR ASK in a time of 40.057. Finishing in second place would be Agustin Rosales aboard CAPELIUS S in a time of 41.865, followed by Shelly Zimmerli and her partner CHARDONAY HARAS DES BARRAGES in third with a time of 42.916. Taking home the white ribbon was Savannah Unger and FABIO TN, followed by Jennifer Brennan and MAC rounding out the top five. Jumper riders joined us back in the Grand Prix Ring on Friday for the $10,000 Johnson Horse Transportation Prix where Cian McDermott and NEWCASTLE would add a win to their record. Mcdermott would fly to a first place finish, crossing the timers in 34.026. Ashley Foster would jump to second and fifth place finishes aboard LUMINOUS and DALIANTE M, respectively. Foster finished with her two equine partners in times of 34.403 and 37.072. Sarah Hubbard and GENIUS would claim the third place award in a time of 34.463. Returning to the Winners Circle and claiming the fourth place award in a time of 35.087 would be Brennan and MAC.

In the $5,000 NAL Summit Joint Performance JR/A-O/AM 1.30m Jumper Classic, Randy Johnson and JADE VAN DE START would finish at the top of the standings in a time of 28.824.

A successful week in the Grand Prix Ring ended with the $20,000 ULCERGARD Open Prix. Three riders would return to the Jump-Off all in hopes of securing top honors in the featured class at the Showday National. All riders completed the Jump-Off with four-fault scores, meaning that the standings would be determined by who was the fastest. Brennan and MAC would soar to a first place finish in a time of 41.938. Following Brennan, in second place was Foster and LUMINOUS in a time of 44.252. Brian Murphy would round out the top three in a time of 49.212 aboard MIMMO T.Z. Not returning to the jump off but round out the top five would be Gavin Moylan and DON FERNANTES Z in fourth and Hubbard and LATINO VAN DE LOOISE HEIDE in fifth.

The winner of the class was presented with an embroidered cooler courtesy of Horze, and a special back-pack courtesy of title sponsor Boehringer Ingelheim, filled with an array of goodies including samples of their ULCERGARD product. In the Hunter Rings, riders joined us for HITS Championship qualifying classes the $1,500 Devoucoux and $1,000 Platinum Performance Hunter Prix. Moylan and STRING OF PEARLS would be victorious in the $1,500 Devoucoux Hunter Prix with scores of 87 and 84, for a two round total of 171. In second place, with a combined score of 169, was Riley Hogan and RONALDO scoring an 83 in Round One and 86 in Round Two. Foster and SUMMERLIN would be awarded third place with scores of 79 in Round One and 87 in Round Two, for an overall score of 166.

Junior and Amateur riders would join us for the $1,000 Platinum Performance Hunter Prix. Lydia Davidson and PARK AVENUE would secure first place with a score of 73 in the first round and an 86 in the second round for a combined score of 159. Jumping to a second place finish was Lilly Pollin and PURA VIDA, receiving scores of 74 and 80 in her two rounds for a combined score of 154. Rounding out the top three in the HITS Championship qualifier was Kathryn Piper Martin and ANDIAMO with an overall score of 148. Martin received scores of 70 in Round One and 78 in Round Two. Join us this week for the Cavalier Classic (July 11-15) where riders will compete for more blue ribbons. For more information on the show this week or HITS Culpeper in general, visit the Culpeper Event Page. The complete prize list is available here. There is still time to enter! Check out the Online Entry System, today!