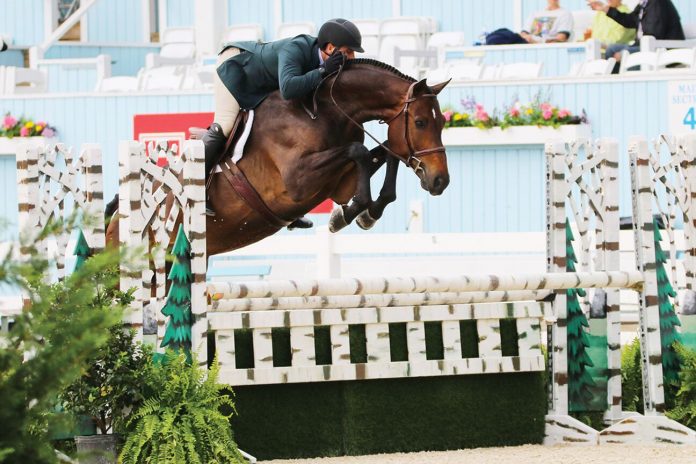 Lindsay Maxwell’s famed hunter, Technicolor, tragically died this spring due to complications from cardiomyopathy. The stunning bay gelding was as kind as he was talented, as beautiful as he was athletic. Technicolor burst on to the national horse show scene at The Devon Horse Show in 2016 when, with Nick Haness aboard, they lit up the board with exceptional over fences scores of 91, 92, and 95. At the most prestigious outdoor show in the United States, a new star had travelled from the west coast to illuminate the hunter ring.

For the next few years, Technicolor continued to shine in both the professional divisions and the amateur division with Lindsay in the saddle. In his too short career, Nico, as he was called, was Champion at almost every major event, including the Devon Horse Show, Pennsylvania National Horse Show, and Washington International Horse Show. He was Champion or Reserve Champion in 38 out of his 58 lifetime shows, or two out
of three horse shows in which he competed. Anyone who was lucky enough to be touched by this horse, whether watching him compete or riding him, will forever remember his grace, talent, and brilliance. Lindsay memorializes her feelings about her beloved mount:

“I feel truly blessed to have been graced with Technicolor. He not only had the biggest personality of any horse I have met, but also the biggest heart. Nico was a champion to the core, and I am incredibly grateful to have shared in his journey through his incredible show career. Even more than the ribbons, I am forever grateful for the countless wonderful memories and lessons Nico gave me. I cannot help smiling and crying every time I think of his beautiful face. He truly was my horse of a lifetime.” How Can Technology Advances Increase The Accuracy of Kentucky Derby Results?