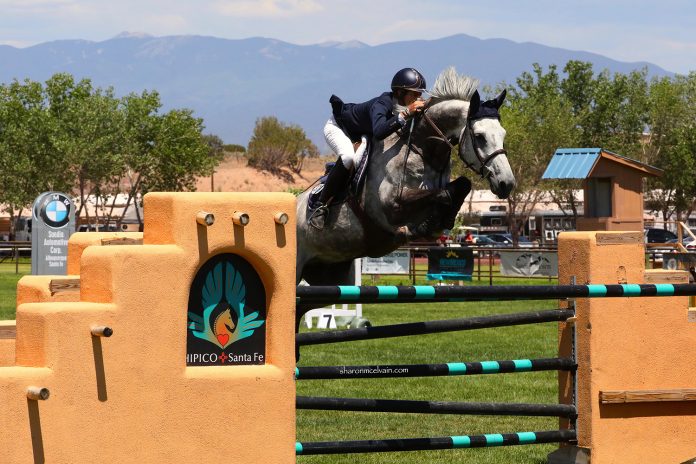 Under blue skies, a light breeze, and with a mood warmly set by a local anthem singer and an adorable lead-liner, the first Grand Prix of this year’s Santa Fe Summer Series commenced. The carefully tuned grass on the Grand Prix field was filled with colorful southwestern and sponsor jumps, along with four shiny BMWs.

“I was delighted to have 20 starts, and 20 good starters! Anderson Lima, course designer, did a beautiful job of using the field and using all of it. The problems arose at a variety of fences which you love to see because there’s not a ‘bogie’ fence that everybody knocked down—it went from fence to fence to fence. It was good competition, good sport and I could not have asked for anything more for the first week of Grand Prix competition in Santa Fe,” said John McQueen, the Santa Fe Summer Series Show Manager, who is head of Queenie Productions.

Four riders proceeded to the jump-off, with Jenni McAllister as the last to ride against the clock. In a flurry of grey, Jenni’s mount—Colvados—whirled around course, making bold inside turns and angling the bigger BMW oxer.

With a jump-off time of 46.12 seconds, Jenni topped Kristin Hardin’s time of 47.25 aboard Bert—the only other to jump clean in the jump-off. Frank Owens took the third prize riding Capricello 2 with eight faults in the jump-off and Charlie Carrel followed in fourth aboard Utopik.

When asked how she felt winning on a horse she’s known for only a month, Jenni answered, “It’s fabulous. I’ve only had that happen one other time in my life. This one is pretty new to [this level], so he’s surprising—[Colvados] has never done a Grand Prix before. And I didn’t know how he would be with the crowd and the grass and everything.”

The $5,000 Santa Fe Welcome Stake marked the first time riding on HIPICO Santa Fe’s Grand Prix Field for many horses and riders this year. The Welcome Stake kicked off the upper level competition at the 2018 Santa Fe Summer Series with 23 rides, 5 of which proceeded to the jump-off with riders Charlie Carrel, Mindy Coretz, Chenoa McElvain, and Colleen Acosta. Acosta and Coretz were the only two who jumped clean in the jump-off, with Acosta departing with a blue ribbon aboard Lights Out. Colleen Acosta is the head trainer and professional at Showtime Farms in Dallas, Texas and won the class with a jump-off time of 35.76—less than half a second faster than Coretz’s ride on Café Crema.

The Welcome Stake introduced Lights Out to a new level of competition. “This is the first time I’ve done him in a Welcome or anything at this height on him,” said Acosta who was pleased with his jumping. “He’s just a big baby—sweet and kind and a little bit of a Mack truck. He’s strong and hasn’t been doing much, so he needed a little confidence,” she said.

Lights Out’s owner Jaelynn Downing is thrilled with her horse, who she got as a Christmas present 2 years ago. “He’s been the best horse for me and is a great confidence booster. He is very forgiving and honest—I put him in some pretty bad spots and he just jumps out like nothing ever happened.” With the first week of the Santa Fe Summer Series serving as an introduction to the facility for Lights Out, Downing is looking to compete in the class with him next week.

After coming to the Santa Fe Summer Series in 2017, Showtime Farms decided to stay for the full series this year with 14 horses on-site. “We love it here—the atmosphere is always really good. It’s fun, it’s friendly, it’s always really laid back… Nice rings, nice footing, we love showing the jumpers on the grass field—I think that makes it special,” said the friendly Texan trainer.

Several years have passed since Kristin Hardin last competed in Santa Fe, where she rode in the boutique show Grand Prix de Santa Fe, the beginning days of what would become HIPICO Santa Fe. This time, the talented trainer and professional from outside of Santa Barbara, California, competed on the same field, in an entirely different kind of Grand Prix class. Hardin entered three horses out of 28 in the All-in-One Jackpot Grand Prix and triumphed aboard her Dutch Warmblood mount named Bert at 1.30m. “Bert was really happy today. Perfect ambiance, footing was perfect, weather was beautiful—it was like being in heaven,” said Hardin.

The All-in-One Grand Prix is a unique class that allows the rider to indicate their height to enter with the appropriate time handicap deducted from their time in both the first round and the jump off. The class’s excitement is propelled by having multiple levels of competitors battling it out in one class, on the bigger Grand Prix Field that borders the VIP Lounge. “It’s cool, because you get the whole gammit of amateurs and professionals all riding in the same class. You have to go clear, but you have to go fast [if you’re jumping higher], because you know the smaller heights are going to be booking it, so you have to test your jump-off skills,” said Anna Algermissen, who competed in the class at 1.20m.

Anderson Lima, this week’s course designer from Brazil, strategically designed a course that would work for a diverse group of riders. “This course needed to be simple, but at the same time, because you need to challenge all the riders. It’s a fine line between a rideable course for the amateurs and a testing course for the professionals,” said Lima. His course included “rideability questions” for the rider, rather than a course that would simply test “strength and power.” Lima ended the course with an in-and-out, which he claimed was “unusual, but is a good challenge for [the riders.]” Lima, who has level 3 FEI course designing experience, included a few long lines so the riders would have to gallop off-their-eye to the distances.

For New Mexicans, grass fields are usually only seen in city parks, golf courses and gated communities; for horse show competitors in the western part of the US, grass arenas are even less common —so it’s a treat to ride on beautiful fields of green that are carefully maintained year-round at HIPICO Santa Fe. For Sarah Rice and Nickle, owned by Alta Basaldua, the grass set the stage for the pair’s winning performance in Friday’s USHJA National Hunter Derby with an overall score of 187. “[Nickle] loves the derbies and is always great at a new place with grass and natural jumps,” said Rice, who is Will Roberts’ assistant trainer at Pine Hollow Farm in New Caney, TX. Her winning strategy on a course designed by Scott Alder, was to “just to go in and gallop and keep galloping to let the jumps come to me as good as they could.”

With two entries in the class for Rice, she swept the field of 12 entries with first and second, on Nickle and Who Dat—owned by Maura Harrower—consecutively. Aboard Who Dat, Rice scored a total score of 180. On her mount Happy Hour, Mindy Coretz took a close third with a overall score of a 179. A few clients in the bleachers joked about Mindy and Happy Hour’s partnership in the derbies. “Ernie is very quirky horse, but Mindy loves that type. Sometimes he’s afraid of his own shadow and has come a long way since she first got him.,” said Cece Siegfried, a junior rider from Oklahoma City.

“Sarah rode both horses beautifully—overall it was a great morning. The field’s beautiful, the jumps are great—I think [HIPICO] did a good job with it. The weather’s wonderful and the footing is fabulous—it’s a nice place for sure,” said Will Roberts.

Lots of horse shows like to call themselves unique. Some offer special classes, which HIPICO Santa Fe indeed does—with several new classes just this year. Some are minutes away from tourist attractions—the Santa Fe Summer Series takes place just 15 minutes away from a destination city. But, there’s no other show that offers this hilarious spectacle of Dachshunds racing every Saturday afternoon! HIPICO Santa Fe welcomes the public with free parking and admission to the entire horse show, but these races are what most encourage the Santa Fe and wider New Mexico community to join in on the fun.

Each Saturday afternoon during the Santa Fe Summer Series on the beautiful Grand Prix grass field, the dogs eagerly enter the handmade starting gate. This week, the race commenced with Guy McElvain driving the cart, smiling up a storm as the Wiener dogs followed. Or at least that’s what they were supposed to do…

The dogs scattered like dropped marbles around the grass field in nothing that resembled a straight line. Some pups ran sideways, some ran on top of other dogs, some circled surrounding jumps, and in the end only a few crossed the finish line in the proper direction. “I thought the competition this year was a lot stiffer than last year, you could tell because halfway down the track, two or three tackled each other. It wasn’t good sportsmanship, but it demonstrated the degree of competitiveness,” said Margaret Mooney, an aficionado of the event which she calls the “weenie races.” She joked, “It’s serious stuff!”

Although several of the dogs trained intensely for the race, the real heart of the event’s purpose is to have fun—which was certainly achieved. The races aren’t to be taken too seriously—they were created to serve as a comedic relief to counter the usual intensity of the Grand Prix arena.