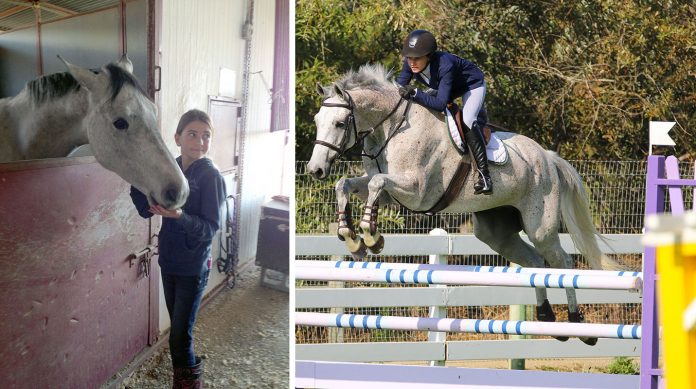 This July, I am attending Junior Hunter Finals with my horse. His USEF registered name is Quin Cardo, and I think we set ourselves apart from a lot of the other horses competing there this year. Quinn, as we call him at home, came to me as an unbroke four year-old. He had barely even been in a stall when we bought him. He didn’t know how to have his hooves picked out. He’s no hack winner, and I’m not a great enough pilot to be the class leader every time, but he has more heart than any horse I’ve ever met. Getting to this point was my dream, and here I am, with my once unbroke horse.

You might wonder how I ended up in a situation where I thought buying an unbroke horse was the best plan. When I was twelve, I had a great, seasoned veteran of a lease horse that we planned to move up to the Children’s division with in the Fall. We would stay there until Spring, and then over the summer we would find our next horse and be ready for the Arizona Fall shows. That plan was interrupted when that lease horse bowed his tendon at the beginning of September, just before the first Arizona Fall shows in October. I tried several horses, but none of them really clicked with me like this lease horse had. By late November, I was so lost and discouraged that I considered quitting riding and finding a new hobby. I had been set back from jumping 3’6” at home with my lease horse to missing at 2’3” with lesson horses and I didn’t really have any goals. My trainer, who is as goal-oriented as I am, suggested that we consider buying a young, green horse that would one day become a winner. I’ll never forget the text message from her to my mom, on November 23, 2013. She just said “I bought Olivia a horse today.”

Quinn arrived as a four year-old. He was a thin, grey horse that barely had any human interaction. He had never eaten a carrot, and refused to eat apples because he was too timid to bite through the fruit’s skin. Basically, he lived in a pasture and was broke enough to make a sale video, but I fell in love with him before I even sat on him. My trainer offered me a homebred mare that was a little further along than Quinn was, and I had to decide which horse to take on as a project without jumping or even cantering either of them. When I sat on Quinn, it felt like how home should feel and I knew all was right in the world. On Valentine’s Day in 2014, my mother told me she had bought Quinn from my trainer and he officially became my project. I didn’t canter him until June, and the first time I tried to trot a crossrail, he crashed through it.

The Fall of 2014, we attempted to go to our first show for the Baby Greens, but right before, Quinn went lame. I fell into panic. I thought my project could be doomed and that I would be fighting chronic lameness with a five year-old until he eventually wouldn’t be fixable and we’d have to put him out of his misery (Pretty cynical, I know). Turned out, he has a coffin bone at a weird angle that was fixed really easily by trimming his hooves differently, which meant he would get better but we had to wait until spring for our first show. Finally, he walked into the Baby Greens with no lunge (it was too wet from rain in the lunging ring), and made it around really well. I also showed him in the 2’ Outreach that weekend.

In October of 2015, we moved up to Low Children’s and in the Spring of 2016 we were in the Age-Group Equitation and the real Children’s — two years after I had planned with my lease horse. Quinn learned quickly, and we were doing the 3’3” Juniors by the October 2016. He competed in his first derby with my trainer that same show. We stayed in the 3’3” Juniors through the first week of Showpark in July of 2017, and even qualified for Junior Hunter Finals in our division. We opted out of competing that year, because he was still a little green and I had a major confidence problem during Spring of 2017. The second week of Showpark was our first time competing in the 3’6”, which was quite the place to move up since our normal show is the only one by HITS that no one has heard of (it’s HITS Arizona in Tucson, in case you were curious).

So here we are, a year of competing in the 3’6” and we’ve qualified for Junior Hunter Finals again. We did it. I made my horse. And sure, all the shows were fun, but what really means something to me was the relationship Quinn and I share. I know my horse front and back. I know he loves blueberry scones from Starbucks, and that he still won’t eat apples. We refer to the liverpool as the liver-monster together. He is my pet shark, because he thinks we’re playing in the jog… only his version of playing is biting my shoulder. I was the one who took my horse over the bank at our tiny HITS show for the first time. I watched him do his first clean lead change. I’m the only one to have ever fallen off of him, and I’m the only one to survive two George Morris clinics with him. I stopped showing in the equitation with him, because we both didn’t like it that much.

But most importantly, I know now that he is a part of me. He is my horse, and we may not win or even place at Junior Hunter Finals this year, but I don’t even care about that. I don’t care that before we warmed up on the grass field, he showed off his terrible manners and begged for treats from John French. I don’t even care that my round is the best one people have seen me ride. I care that today, we are better than we were yesterday. Today, we are doing more than trotting in a circle. Today, I am still the little girl who found her home on Quinn.

Equitation and the Ammy