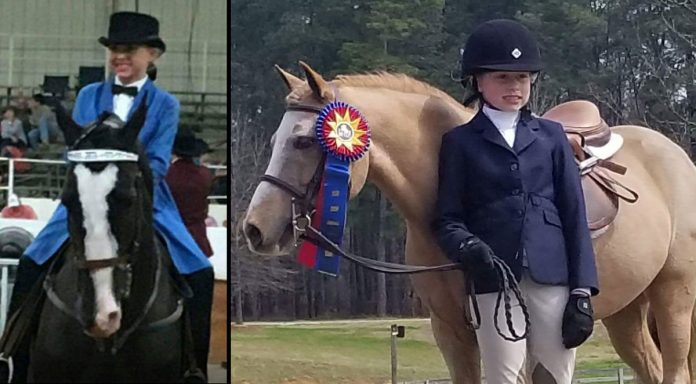 Many pony riders are nervous, jittery and extremely excited as they head off to Pony Finals at The Kentucky Horse Park for the first time. Finley-Grace Brooks is just like them, but unlike many other first time Pony Finals competitors, she balances her riding time between the hunter/jumper ring and Tennessee Walking Horse competitions. At only ten years old, she’s a Tennessee Walking Horse World Grand Champion.

Brooks takes the trek from Birmingham, Alabama to Pony Finals with her long time partner The Roan Ranger, also known as Blaze. After qualifying for the finals by winning at their first show at Chat Hills, it will be both of their first times competing at this prestigious event. Brooks plans to show Blaze in the Small Green Pony Hunters.

Blaze, a 13 year old Welsh pony, has come a long way since Brooks started riding him nearly 6 years ago. Blaze was put in the pasture after being shuffled from barn to barn as a lesson pony, and became lesson sour. Then Brooks’ trainer, Stephanie Howard Gingles paired them together. They have been working on their goal of Pony Finals ever since. “She has worked diligently with him for the last 5 years to get to her dream of Pony FInals,” Finley-Grace Brooks’ mom, Stephanie Mayfield Brooks explains, “What was amazing is all the trainers who discarded him as a bad pony got to witness him compete at Chat Hills to qualify for Pony Finals.”

On top of her time spent working with Blaze, Brooks rides and competes on Tennessee Walking Horses. Her mom introduced her to the discipline in 2015, and ever since she has found success. Between Brooks and her mom, they have three Tennessee Walkers, Lady, Psycho and Doc.

Going in to Pony Finals, Brooks is struggling with the loss of her Tennessee Walking Horse, Viper, who passed this past week due to a twisted intestine. Just last year, Brooks won a World Grand Championship in the Juvenile 12 and under class on this special horse. “They called him the beast because he was our hardest horse. He was like a puppy dog at home, but when we got to the shows he was like Godzilla,” Brooks explained.

Although Brooks has found success in both hunter/jumper and Tennessee Walking horse competitions, she still finds it hard to switch between the two very different disciplines. “For the Walking Horse industry, it is kind of hard because I’m used to putting my hands on my thighs and that’s how you keep their head braced, but in the hunter/jumper world you have to keep your hands on the neck,” Brooks said, “I find riding Tennessee Walking Horses is a lot harder than riding hunter/jumpers, because you have to keep their head in a tucked position.”

Finley-Grace Brooks has had a long road to Pony Finals, but is very much looking forward to the week ahead with Blaze. “I’m Looking forward to having fun and since its my first time at Pony Finals I want to have lots of fun and meet lots of people,” Brooks said.