On August 17th 2018, excitement and pressure mounted leading up to the largest Grand Prix in Illinois history. Hosted by HITS Balmoral Park, Crete, IL, the Showplace End of Summer II show featured the $500,000 HITS Chicago Grand Prix, an event drawing the sport’s top names and a big crowd of trainers, students and equestrian fans. The Grand Prix hosted world riders like Beezie Madden, Todd Minikus, Margie Engle, Quentin Judge, Lucy Davis, Samuel Parot, Andy Kocher, Lisa Goldman, and Hunter Holloway along with other top international riders. They all came from far and near to compete for a piece of the big prize money.

Just before the event took place, I was lucky enough to sit down with two-time U.S. Gold Medal Olympian, Beezie Madden. Beezie has ridden her entire life, since age three, and is beyond accomplished both on and off the horse. She shows her confidence and determination in everything she does, and is one of the most well known woman riders in the sport.

As a young female equestrian, I am honored to have had the big opportunity to sit down with Beezie to ask some questions prior to her entering the ring.

Emmy Dolin: How do you like the atmosphere and showing at Balmoral Park?
Beezie Madden: It’s nice. The facility is good and the footing is as well. The prize money is great. Since it is new, once it gets more popular I’m sure the park will grow.

ED: What would you say has been your biggest personal riding accomplishment?
BM:  The gold medals are important to me in a team aspect but if it’s personal, I would say the two World Cup Final titles.

ED: What would you say is your favorite part about being an equestrian and why?
BM: I of course get to work with horses – special horses I would call them. It’s nice that I can do my passion but also make a living out of it.

ED: I recently heard that you have opened a retirement farm?
BM: Yes! It just gradually grew. We wanted to make a space for the horses that don’t work anymore. There was land we had that we expanded and then we bought more acres of land as well. It is a business and a need for horses who need somewhere to stay that’s nice and retire. John Madden Retirement farm can be found at http://www.johnmaddensales.com/retire-at-jms.html

ED: What advice would you give to any young riders just starting out who want to make it far in the sport?
BM: The teaching is important and finding a horse is just as important. I would say, get with best in the industry. You can learn from them and make good contacts through them.

ED: Now that you have accomplished so much in your riding career, what are your next goals?
BM: I would say making the team for the Tokyo Olympics and develop more horses.

ED: Where did you get the name Beezie from?
BM: I was actually given that name (Beezie) from birth. It is my grandmother’s nickname. I was named Beezie because there are so many Elizabeth’s in my family.

It was so exciting to watch Beezie ride in the Grand Prix after interviewing her! I will forever be grateful for the opportunity to meet Beezie! 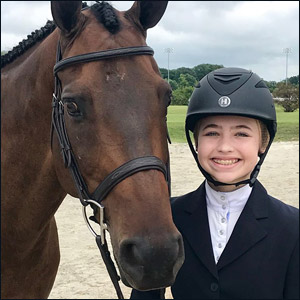 About the Author: Emmy Dolin has been writing for The Plaid Horse for two years. She rides hunter/jumper in Zone 5 on the A circuit.

These are The Best Horse Online Games