Home Blogs Rising to the Top: 10 Young Boys in the Hunter/Jumper Sport

Wynnston, age 3, rides with Ryan and Janet Sassmannshausen out of Kinvarra Farm. He started riding from an early age and competed in his first lead line at only ten months old. Wynnston also owns a pony, Sophie. Wynnston compares Sophie to Spiderman because she always tries to do her best to help her rider. With Sophie, he has made huge strides, and were the winners of the Devon Horse Show 3 Year Old and Under Leadline! They will also showing around the Chicagoland area, Kentucky, and Wellington throughout the year. Wynnston states his favorite thing about showing is seeing all of his friends, playing in the dirt, seeing Sophie braided, or “decorated” as he likes to say, and of course, watching all of the tractors roll by. In the future, Wynnston would love to drive the horse trailers and ride big horses.

Matthew Burtard, age 10, rides with his mom, Emily Elek, out of Stonewall Farm. Matthew has two ponies, Jennifer Grey (Jenni) and The Bees Knees (Bees). Jenni and Matt love to play together, and Jenni will even follow Matt around! Matthew compares Jenni to Wonder Woman. Bees is also very cute, and makes Matt laugh often. He thinks Bees is more like Batman. Out of these two, Matt said Jenni is his favorite because “She is so cute!!!” This summer, Matthew is showing in the Small Ponies and the Medium Ponies. Matthew can also be seen in Kentucky, Chicago, at Pony Finals and Minnesota Harvest. In the future, Matt would love to compete in the Large Ponies and at Pony Finals again, since Pony Finals is so much fun. When he is older, he wants to work with trains.

Jack Crawford, age 8 and a half, rides with his parents, David and Kirsten Crawford, at the family farm, Promise Hill. Jack says his biggest riding accomplishment is winning a large children’s pony class on his pony, and getting reserve champion in Pony Jumpers last summer in Calgary. Crawford has four ponies, Helicon’s Country Rose (Rose), Cherrybrook Heavenly Blue (Smarty), Australian Puzzle (Itsy), and Tazmania (Tazzy). However, his favorite is Itsy because of her smooth jump. Jack even compares Itsy to BatGirl! He is currently competing in the small pony hunters and 0.80 meter jumpers. At shows, Jack is superstitious that his kangaroo tie brings him good luck. Later this show season, he wants to compete at Rocky Mountain Show jumping in Calgary, Canada. Then, in the future, Jack would like to compete in the High Junior Jumpers and Large Junior Hunters on his dad’s horse and eventually become a Paleontologist.

Most in the Midwest already know Austin for his great pony riding. For those of you who do not, Austin, age 12, rides with his mom, Amber Bauman. Austin has two ponies, Miracles Happen (Roy) who he shows in the Pony Jumpers, and Prince Caspian (Lewis) who he shows in the small ponies. Austin states, “Roy works so hard and tries every time we ride. Lewis, I can go around and ride with a halter and lead rope”. He compares Roy to Superman, and Lewis to Underdog. Roy and Austin have also had great success in the Pony Jumpers. He had great ribbons at Devon last year, and has captured many championship titles. Austin and Lewis also won good ribbons together at WEF. This year, you can spot Austin at Devon, Kentucky, Equifest, Ohio (WEC), and in Minnesota. In the future, Austin would love to compete in Grand Prix’s and later become an orthopedic surgeon.

Many know of the 12 year old, as he is the kid featured riding many of the beautiful horses at Stal Wilten. More personally, Mel Vanderkamp lives in Dalfsen, Netherlands. He started riding because his mom and brother both rode. Vanderkamp has three ponies: Idool Van Het Rozendealhof, Garfield, and Mensinghe’s Lente. Mel finds all of his ponies nice, but Garfield, in his opinion, is definitely the sweetest! He also frequently compares his ponies to The Flash. He trains with them at his home stable, lessons two times a week with his trainer, and throughout the week rides with Stal Wilten. One big accomplishment of his was being crowned Regional Champion in his class last winter. Mel loves the jumping portion of showing, and this year, he hopes to move up to the M/d Classes while at competition. In the future, Mel would like to become a show jumper and compete at the Grand Prix level, Olympics, and World Equestrian Games. Nonetheless, Mel does have superstition at shows: he has to be wearing his favorite Equiline socks!

Jack Cash, age 9, rides at Hidden Acres Farm in West Milford, NJ. He started riding because he is an 8th generation horsemen, and wants to keep his family’s tradition carried on. Jack’s current (and favorite) pony is DeNiro because he is a young pony and he has the opportunity to train him. DeNiro is a 3 year old chestnut German riding pony that Jack’s mom and dad had imported in February 2018. Jack and DeNiro show in Short Stirrup right now, but are hoping to move into the Childrens Large Division by next year. Jack also compares DeNiro to the Hulk as he is very powerful looking. This year, Jack wants to go to HITS Saugerties, Tryon, WEC, The Hampton Classic, and GLEF. Jack’s favorite part about showing is being a part of a team and competing with his friends. He also loves having his parents ringside. Jack has also has great success in the show ring, as he states his greatest accomplishment is “Winning HITS Saugerties Circuit Champion 2017 in Short Stirrup Equitation and Short Stirrup Hunter”. Jack also has one superstition; he always wears his C4 Belt that has the dollar sign on it. In the future, Jack would like to show in the Jumpers and 3’6 Equitation, and maybe even win an Equitation Final! Cash also wants to become a Grand Prix rider when he grows up.

Josh Baird, age 15, rides with Maggie Jayne out of Our Day Farm in Elgin, IL. Josh’s riding career started when his grandparents brought him to a horse event. In 2014, Josh officially started riding. Josh has three horses, Lollipop S, Peninsula Emerald Las, and his newest, Tresor Platiere. Lollipop S, according to Josh, has the best personality and he loves everyone, as well as his job. His other horse, Emerald, also loves her job and takes care of her rider. Josh compares his horses to Superman, because they save him so much and are all super brave. Together, Josh and his horses successfully compete in the Low/High Children’s jumpers. Thinking back, Josh would say his biggest riding accomplishment is winning a classic at WEF and winning his first indoor classic at Minnesota Harvest. In the future, Josh would like to become a Grand Prix Rider or a Fashion Designer. That being said, he would like to compete at Washington, Harrisburg, the World Cup, World Equestrian Games, and the Olympics.

Grayson Pacelli, age 10, rides at the Concord Equestrian Center in Del Mar with Shannon Palmer and Ashley Hill. Grayson’s pony, Cabana Boy (aka Captain) is a Welsh Mix Bay medium pony, and Captain enjoys neck massages and Paddock Cakes. Grayson’s favorite thing about Captain is that he does not spook and he has a very fancy trot. Sometimes, Grayson likes to compare Captain to Iron Man since he is not afraid of anything! The pair currently competes in the cross rails and flat classes. A major accomplishment of Grayson’s is being crowned the HITS Coachella mid-circuit reserve champ in the Beginner Eq. In the near future, Grayson wants to move up to the 1.0m Jumpers, and he later hopes to jump higher fences, like in the 3’3 Juniors. Once he grows up, he would want to become either a professional rider or a professional scooter rider!

Henry Healy, age 13, is competitively showing in the Junior Hunters. When he was younger, his sister rode, which then influenced him to pick up the sport. Henry loves that riding and competing pushes him to the best, as well as his horses personalities. In fact, he would compare all of his horses to Superman! Over the years, Henry feels like his greatest accomplishment was moving up to the Junior Hunters. Furthermore, Henry wants to qualify and compete at Indoors this year, and become successful in the 3’6 Junior Hunters. Also, sometime in the future, he would love compete in Grand Prixs, the Big Eq, and International Derbies, then later become a Professional.

Clayton Martines, age 13, rides out of Our Day Farm in Elgin, Illinois. Clayton started riding most of his life, mentioning he does not know the exact number of years. He has has multiple horses, including Centolys (Cento), Petit Point (Petty), Opera, Exhale (Sox), and Bitelli. Currently, Clayton successfully shows his horses in the jumpers. This year, you can spot Clayton in Kentucky, and at Chicago’s Equifest, Great Lakes Equestrian Festival, and in St. Louis. According to Clayton, his favorite part about showing is getting to know his horses better and having fun with his horses. In the future, Clayton would like to bond further with horses, taking care of them and playing with his future horses. Other than equines, Clayton is interested in archery. 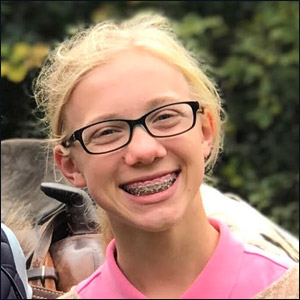 Daisy Ford and Gatsby Get the Win in $100,000 Lone Star State Grand Prix

Rule Changes and a New Outlook on Equestrian Sport in the...