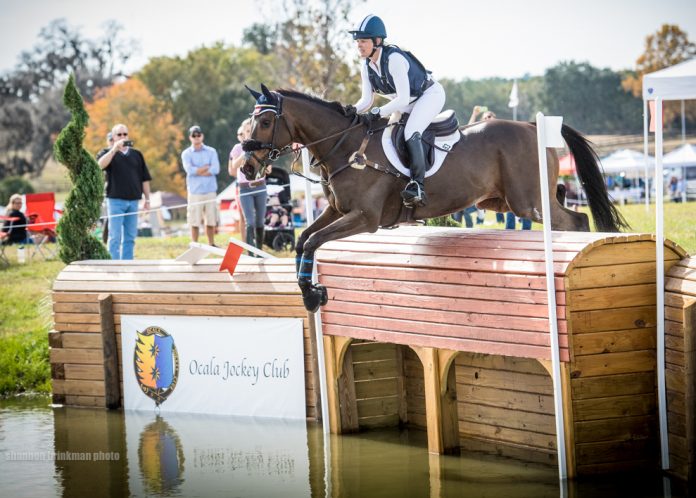 Team USA at WEG is represented by five team members, of which four have previously competed at OJC. 2016 Rio Olympic Individual Bronze medalist Phillip Dutton will ride Z, the same rider-horse combination that won the CIC3* division of the 2017 Ocala Jockey Club International 3-Day Event. Lauren Kieffer and Vermiculus placed sixth in the same division in 2017. Boyd Martin, who placed 3rd with Steady Eddie at the 2016 OJC CIC3*, will be riding Tsetserleg at WEG. Lynn Symansky and Donner, the 2016 Olympic Team Traveling Reserve horse-rider combination, placed 6th overall at the 2016 CIC3* OJC Event. They also won the inaugural Ocala Jockey Club CIC3* Thoroughbred Eventing
Champion award. Of the alternates on Team USA, two combinations have previously competed at the OJC Event. Phillip Dutton and I’m Sew Ready competed in the 2017 CIC3*. Elisabeth Halliday-Sharp rode Deniro Z to first place in the 2016 CCI1* division at the Ocala Jockey Club International 3-Day Event. Overall, the 2017 OJC Event qualified 6 competitors from 4 countries to WEG. “The Ocala Jockey Club is proud that our November event has been supported by the best of the best in the sport. We will be cheering Team USA to bring home medals along with pride to USA. An event of this calibre serves to provide much inspiration to young riders looking up to their countries’ team members and
dreaming to represent their countries on the world stage one day themselves. It shows to all of us what is possible when one aims high in their dreams and works hard towards a goal,” said Pavla Nygaard, President of the Ocala Jockey Club.

The excellent footing, viewing opportunities and stunning spectator-friendly rolling hill terrain have propelled the Ocala Jockey Club International 3-Day Event to quickly establish itself as a popular destination for top-level riders. Lynn Symansky, one of the Team USA members at WEG, says: “The OJC is a real destination event with a true international feel. It’s a world class facility with spectacular viewing and entertainment for spectators and owners. It’s an event I look forward to bringing my horses to every year… great atmosphere and courses on beautiful rolling terrain. They do a fantastic job putting on a top class event.” The 2017 Event grew to 178 entries from the 2016 inaugural Event
which attracted 115 entries from nine countries across four continents. It has also already become a key event for the Ocala community, with it having brought $1 million of economic impact to Marion County in 2017. In recognition of its sports tourism value, the event has been generously supported with a grant by the Marion County Visitors & Convention Bureau (MCVCB). This year’s 3rd annual Ocala Jockey Club International 3-Day Event is set to run November 15-18, 2018. This year’s event will feature an added prestigious CCI3* division, only one of five in the USA and the only one to be held in the Southeast. The CCI3* will be designed by Olympic Individual Silver medalist Clayton
Fredericks along with Mike Etherington-Smith, the course designer for the Sydney and Beijing Olympic Games, as Assistant Course Designer. Shelley Page, the OJC Event Organizer, is also the eventing discipline organizer at WEG.

The OJC facility, with its rolling hills and showcase old-growth Spanish-moss-laden oak trees, is a crown jewel in the horse country of Ocala, Florida. About 200 acres of the 950-acre Ocala Jockey Club property serve as a Thoroughbred training farm and to stand stallions, and the facility also includes townhouses and an iconic clubhouse, which serves as a unique venue for weddings, meetings and other special events. For more information on the Ocala Jockey Club, visit www.ocalajc.com. For more information on the Ocala Jockey Club International 3-Day Event, visit www.ojc3de.com.