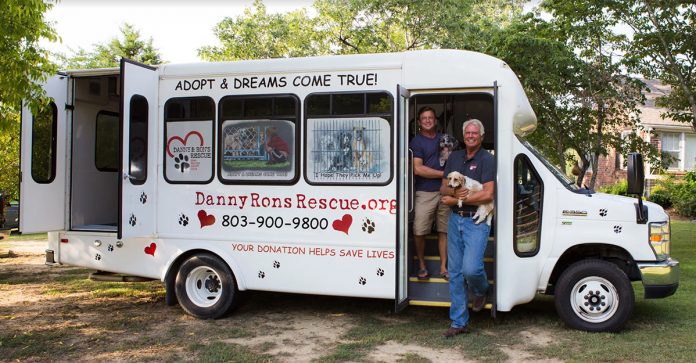 When Hurricane Katrina made catastrophic landfall in the United States’ Gulf Coast in August 2005, animal-lovers Danny Robertshaw and Ron Danta made the long drive from South Carolina to Louisiana to help the four-legged in need any way they could. Little did the pair know that nearly 13 years later, they would be celebrating their rescue’s 10,000th adoption and watching their story shared in movie theaters nationwide.

Both veterans of the equestrian world, Danny and Ron first began their journey together in the elite hunter and jumper arenas. Danny Robertshaw, the 2018 National Hunter Hall of Fame inductee and a revered judge, met Ron Danta, a highly respected hunter trainer, while they worked together in the industry. Now partners for over 30 years, they are fondly known in both the equestrian and canine spheres for their tireless work to better the lives of less fortunate animals.

Danny and Ron’s Rescue now boasts over 11,000 dogs rescued and rehomed. That number becomes even more impressive when you realize that the couple houses the dogs in their own home — up to 75 at a time.

This year, FilmRise and director of the award-winning documentary Harry and Snowman, Ron Davis, announced the release of Life in the Doghouse, a feature documentary that follows the daily life of the duo as they approached their 10,000th adoption. Life in the Doghouse lets viewers see Danny and Ron through a unique lens, allowing them to walk in the couple’s shoes, witnessing the love they share and the souls they save. The filmmakers also partnered with Gathr® Films’ Theatrical-on-Demand® platform, allowing the film to come to theaters in any town as a much-needed fundraising opportunity for local dog rescues.

“Partnering with Gathr® Films’ Theatrical-on-Demand® has helped us reach so many and spread Danny and Ron’s message to people who may have never had the chance to hear it otherwise,” Filmmaker Ron Davis said. “The response to the film has blown us away. Everyone who watches it shares our feelings that Danny and Ron’s story is special, and it makes it even better that others can contribute to dog rescue efforts by watching.”

Life in the Doghouse has received plenty of national attention since its release, being featured on NBC’s Today Show, Fox News, The CBS Evening News, The Hallmark Channel and a major profile in The Chicago Tribune. It has also been screened at film festivals around the country, including the Tryon International Film Festival this year, where it was given the honor of being named Best Documentary of 2018.

Danny and Ron have celebrated the impact their story has had on dog rescue throughout the year, touring the country and appearing at screenings by request. In addition to urging people to adopt instead of shop, they also spread awareness of spaying and neutering to pet owners to further their cause.

Danny and Ron’s heartwarming story is now available to view in the comfort of your own home for the holidays. Find Life in the Doghouse on iTunes, and leave a review to help it reach more people. If you would like to host a screening of the film in your hometown and make it a community event, you can learn more at http://www.lifeinthedoghousemovie.com to raise money for a dog rescue of your choice.

In the spirit of giving and promoting the mission of Life in the Doghouse, Davis and Distributor FilmRise are donating all of the film’s proceeds to dog rescue charities in need. If you would like to donate directly to Danny and Ron’s Rescue, please visit https://dannyronsrescue.org/donate.