Home Blogs Jump Off Throwback Thursday: Sweet Lullaby Was The Horse That Made It Happen For... 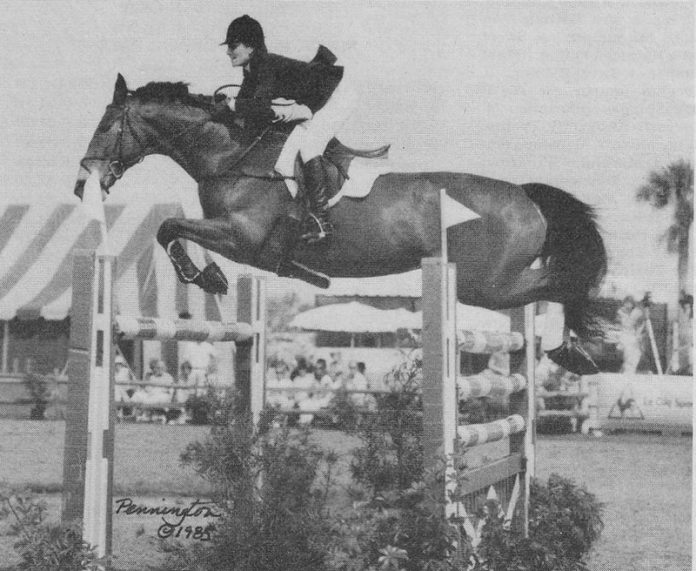 Martha Wachtel Jolicoeur didn’t even enter herself in her first grand prix. “I was always placing first and second in the open power and speed jumper classes in [Wellington], but I was too scared to ever enter the grand prix,” Jolicoeur said. “I didn’t know it, but one week, Mario Deslauriers nominated me and that’s how I did my first grand prix.”

Then, a few weeks later in just her third grand prix start, Jolicoeur won the $25,000 Mercedes Masters World Cup Grand Prix aboard her Sweet Lullaby. The year was 1985, and Jolicoeur had been competing in the high amateur-owner division and dipping her toe into the open jumpers. After that first win in Palm Beach, Jolicoeur went on to earn the American Grand Prix Association Rookie of the Year title for 1985.

“She was really smart and super careful,” Jolicoeur said of Sweet Lullaby, a mare she bought from Belgium’s Francois Mathy in 1982. “If she was not going to be able to jump clear, she would stop so fast and I would fall off. We either won or I fell off. She was very good in the high amateurs, but she was the horse that really got me into the grand prix and jump-started my career at that level.”

Jolicoeur, who grew up in Westport, Connecticut, had a successful junior career. She rode with George Morris and was grand junior hunter champion at Devon (Pennsylvania) in 1977 and ’78 on her Movie Star, who also picked up a Pennsylvania National tricolor in 1978. Additionally, she was named Best Child Rider at the Pennsylvania National Horse Show in 1978.

“She was an amazing small junior hunter,” said Jolicoeur of Movie Star. “She was a good mover and won the hack in New York. I placed in Medal and Maclay Finals, but never won.”

When she was in college at St. Lawrence University (New York), Jolicoeur rode with Ian Millar and got serious about doing the jumpers. “He told me that I knew exactly what I needed to do to ride jumpers successfully, but I was afraid,” she recalled. “Ian was instrumental in helping me to be competitive on more horses.”

Millar was her trainer when Sweet Lullaby came into her life in 1982. Mathy had found Sweet Lullaby in a tiny town in Switzerland and alerted Jolicoeur to come try her. “Ian was supposed to fly over and see her as well, but I called him and said, ‘I have never ridden anything as nice as this horse and I don’t want you to come find something wrong with her.’ That was it. I flew back home and my father, Jesse Wachtel, purchased her,” said Jolicoeur.

“Both my father and the groom that took care of her, Peter Rohr, have since passed away, so they are all greatly missed,” added Jolicoeur. “They were both instrumental in our success. My father for getting me the horse and Peter for taking such exceptional care of the horse. They were both really supportive.”

After graduating from college, Jolicoeur moved to New York City and rode with Norman Dello Joio. She credits Morris for giving her great basics during her junior years, Millar for teaching her to be competitive at the highest levels, and Dello Joio with helping her to put the finishing touches on her riding to complete the package.

When Sweet Lullaby retired, Jolicoeur bred her a few times. “She had great foals. Her baby, Hushabye [sired by Big News], won the 4-year-old [International Jumper Futurity] with me at Devon,” Jolicoeur said.  Hushabye was then sold to Jessica Newman, and later enjoyed a grand prix career under Canada’s Eric Lamaze. Sweet Lullaby was also the dam of Sweet Dreams, sired by Olisco, a horse that Millar purchased at 18 months old and competed at the grand prix level.

Between 1986 and 1990, Jolicoeur was a familiar face in the grand prix ring and competed in Europe as well. In 1991, she married renowned Canadian trainer Pierre Jolicoeur and started thinking beyond her career in the saddle by getting her real estate license. The couple settled in the Middleburg, Va., area and Martha split her time between competing and real estate, still spending her winters in Wellington, Florida. Then, in 2005, she made a big change. “I was riding my horse along a hill and thought to myself, ‘I’m not getting better at riding and I really want to secure my future for my family,’ ” Martha said. Her daughter, Isabel, was in the eighth grade then and has now graduated with a law degree from the University of Miami.

Jolicoeur focuses her real estate business on equestrian properties and spends quite a bit of her time at the Winter Equestrian Festival (Florida), where she sponsors the leading lady rider award in the open jumper division.

Gold: Will Simpson Rides On