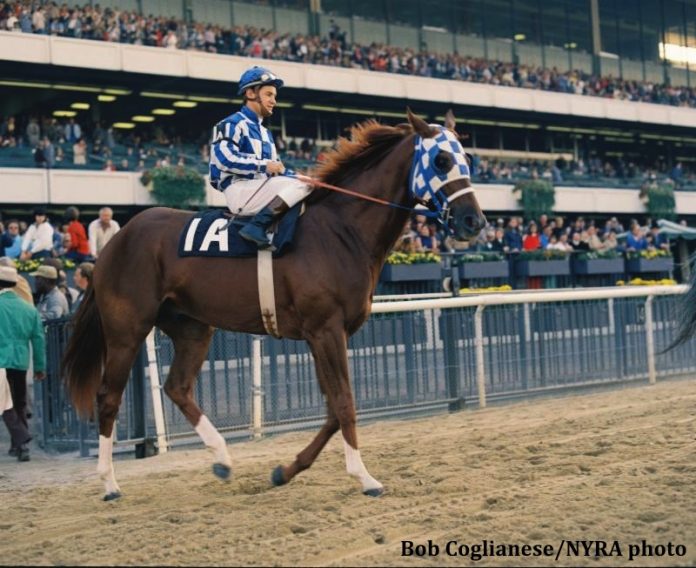 Three of my very favorite things are horses, art, and history. When they combine into an astonishing tribute into one of the greatest horses who has ever lived, it’s a new level of excitement.

In September, Lexington, Kentucky plans to be home to the newest monument to the great Secretariat. Cast in bronze at 1.5 times the living horse’s size and set in a position of prominence at the intersections of Alexandria Drive and Old Frankfort Pike, the monument will have a viewing area and informational kiosks.

Jocelyn Russell is the artist creating this monument to the 1973 Triple Crown winner. She also sculpted the Kentucky Horse Park’s statue of Sergeant Reckless, a mare who was critical to Marine Corps operations in the Korean War. Secretariat will be portrayed as many of us know him best: crossing the finish line of the Kentucky Derby in position 1A with his jockey Ron Turcotte aboard.

Besides being an exceptional talent, Secretariat has unique histories around him. Here are some of my favorite things about the legendary horse and his humans:

Secretariat’s owner was a woman named Penny Chenery. Horse racing in the 1970s was even more dominated by men than it is now, and she had to push hard to get her horse into the scene. She was inducted into the Jockey Club in 1983 and was a sort of goodwill ambassador for the sport for the rest of her life. She also advocated strongly for the benefit of retired racehorses and was heavily involved in founding the Thoroughbred Retirement Foundation. Chenery died in 2017 at the age of 95.

Even in the literal sense, the horse had heart. The average thoroughbred’s heart weighs nine pounds, but Secretariat’s weighed 22 pounds when he was fully grown. Many believe that explains the X factor, how he could do what he could do. Researchers have theorized that, heart size being linked to X chromosomes, he may have inherited his large heart in a lineage all the way back to the great sire Eclipse. His excellent conformation also contributed to his brilliance on the track.

Secretariat still holds the records for the Kentucky Derby and the Belmont. He’s also the only horse ever recorded to run faster in each quarter mile of the Derby. Most horses tire and slow down as the race goes on. His Derby time of 1:59.97 is still the Churchill Downs record. And he won the Belmont at an astonishing 31 lengths in 2:24.00–again, track records.

Who? Exactly. In all of the justified glorification of Secretariat, we miss the horse who actually saved Meadow Stud, Secretariat’s home. The 2010 movie about Secretariat, loosely based on his life, fails to mention Chenery’s actual favorite horse at the time and the horse who won two legs of the Triple Crown (the Kentucky Derby and the Belmont) in Secretariat’s two year old year. His success propelled Meadow Stud into financial security, which was further helped by Secretariat’s success as a stud in later years. In fact, Ron Turcotte refused to consult on the movie because of the exclusion of Riva Ridge, one of his favorite horses of all time and who he rode to Derby victory.

Eddie Sweat was Secretariat’s groom and integral to his story. He was an African American son of sharecroppers in South Carolina who hung around Lucien Laurin’s stables as a kid. Laurin would later become Secretariat’s trainer. Lucien offered the young fellow a job in 1957, perhaps one of the best decisions he ever made. Sweat had an incredible gift for horses, and after Secretariat won the Triple Crown in 1973, he received national and international attention, appearing on the cover of Ebony and Jet and appearing on television shows and in photography that found its way around the world.

Sweat was also the first groom ever to have back to back Derby winners–Riva Ridge in 1972 and Secretariat in 1973. He is the subject of a 2006 book by Lawrence Scanlan called The Horse God Built: Secretariat, His Groom, and Their Legacy. The Kentucky Horse Park is home to a statue of him leading Secretariat and Turcotte to the winner’s circle after their Derby win. Sweat died of leukemia in 1998.

Ron Turcotte is the only person in the world who will ever have the experience of riding Secretariat in the Triple Crown races. That sounds obvious, but let that sink in. This legendary sporting achievement, and it came to him. Later in his professional career he had a crash that left him paralyzed, but that has not stopped his zeal for the horse world, and he works hard for the Permanently Disabled Jockeys Fund. In addition to being memorialized in statues and in other movies and books about his famous mount, he was the subject of a 2013 documentary, Secretariat’s Jockey, Ron Turcotte. My favorite tidbit about him is that when a Mafia member testified in court in 1980, he named Turcotte as the only jockey who couldn’t be corrupted.

Secretariat and his people are extremely worthy of such a beautiful artistic tribute, and we are excited to see this new monument later this year.

We Have to Fix Our Audience Problem Before We Can Fix...