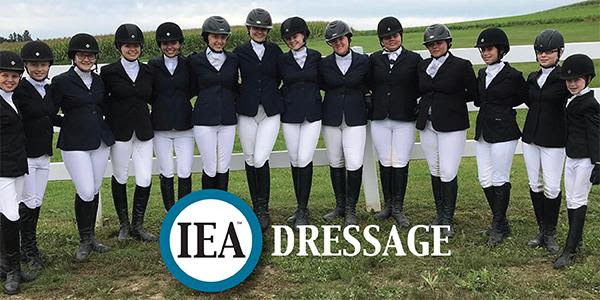 The Interscholastic Equestrian Association (IEA) Board of Directors recently voted to officially adopt the Dressage discipline into their program beginning in the 2019-2020 season. For the past three years, Dressage has been offered as a Pilot Program – allowing riders to participate in a limited number of scrimmages across the nation. The first two years of the Pilot Program allowed riders and teams to “test the waters” by holding Dressage shows in the IEA draw-based format and at a reduced membership cost. The program has been an overwhelming success and, in fact, participants tripled over the three years.

During the 2017-2018 Season, IEA hosted a Dressage Finale at Otterbein University in Westerville, Ohio – a culminating event that was open to both IEA and non IEA Dressage riders, regardless of points or past participation in the scrimmage horse shows. Nearly 70 riders from 10 states participated in that inaugural event.

At the beginning of the 2018-2019 season, IEA formalized the membership application process for Dressage riders and teams and held official horse shows in more than 15 states. Less than 100 riders participated in the first year of the Pilot Program with the number of Dressage riders in 2018-2019 increasing to more than 300 active participants and nearly 100 teams.

“The growth and excitement surrounding the Dressage program has been amazing,”says IEA Dressage Zone Administrator Emily David. “I couldn’t be more grateful for the amount of people that have stepped in and are so involved in this program from within and outside the IEA. I know it is going to grow fast and have a really bright future.”

Like its counterparts in Hunt Seat and Western, IEA Dressage riders in middle school and high school who have a minimum of one-year riding experience can compete on teams in both dressage test classes as well as dressage seat equitation classes.

On April 13-14, 2019, IEA will again host a Dressage Finale at Otterbein University as a final Dressage event to the 2018-2019 season and in celebration of the three-year Pilot Program. This Finale will include dressage riders and teams who have earned a specific number of points or are in the highest percent of participating teams in their Zone. In future seasons, Dressage will hold a National Finals event similar to both Hunt Seat and Western National Finals.