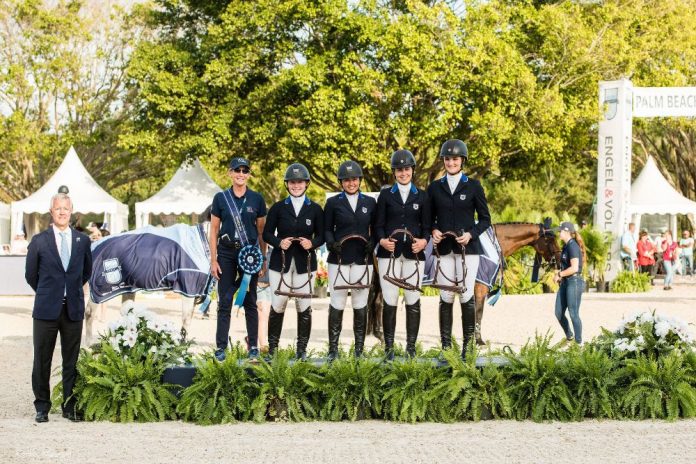 “The best thing about this event is that these riders – from all the nations competing today – are the future of our sport,” said Kursinski. “In Europe, there are Nations Cup competitions for Children, Juniors and Young Riders, but we don’t get that in this country. So, for these kids to have an event like this to ride for their country and really feel it, there’s just nothing like it. It’s an amazing experience, and I am so thankful that the Jacobs family put in on here.”

“We all know each other pretty well. Coming into this week, I think we had confidence not only in ourselves, but in each other,” said Goetzmann. “We’ve all had experience on a team, and each year we just gain more and more experience. I have to thank the Jacobs family for allowing us to come here and giving the younger kids a shot at the Nations Cup format.”

“This was such a fun event, [and] I am so thankful to the Jacobs Family for putting it on,” added Strauss. “We are all friends, and we have all competed on teams before, so it’s even more exciting to have this moment and this win with your friends. I think we all aspire to compete on the Senior team one day, so to have this experience is unparalleled.”

Fischer agreed. “I think it’s really amazing to be on a team with such great riders and have such a great coach to show us the ropes. I think one day in the future, the four of us will be sitting in the same situation, but on a senior team,” said Fischer. “I’m calling it now!”

“I am so thankful to represent the U.S. alongside my three amazing teammates,” said Cohen. “I am so thankful to the Jacobs family for putting on this amazing event. For us to be able to compete alongside the Senior team and the Children’s and Junior teams is an unforgettable experience for me.”

In the Junior team competition, the Stars and Stripes team captured the win; the group consisted of Mimi Gochman, Tanner Korotkin, Catalina Peralta and Yasmin Rizvi. USEF Chef d’Equipe for Development DiAnn Langer served as the Team Captain and was proud of their performance.

“There is a process of selection and a minimum criteria before we determine who will be on the U.S. team, and these riders rose above so many others, and I can’t tell you how proud I am of them and all they have accomplished so soon in their careers. They were excellent today,” said Langer.

“They were in a tough spot. They were tied going into the second round, and it came right down to the last couple rounds. Tanner, as the anchor, absolutely came through. Everyone did what they were supposed to do and delivered. They were fantastic.”

Korotkin was not fazed by the pressure of the anchor role. “I thought it was a great course for my horse; he was ready to go,” said Korotkin. “I didn’t really feel much pressure going last; I just wanted to put in the best round possible. He jumped fantastically well [in] both rounds and brought home two clear rounds, so it was awesome.”

In the Children’s division, the U.S. Red, White and Blue team took top honors. Unlike the Junior team, the team of Mia Albelo, Ansgar Holtgers, Jr., Caroline Mawhinney and Zayna Rizvi had not competed together. In fact, some of them had just met for the first time three days ago. Langer was pleased with how they learned to work together in such a short period of time.

“We wanted to give them experience at the earliest age possible,” said Langer. “These riders quickly got the idea that they had to come together as a team, and they did. They were a model team, and I can’t thank them enough for pulling it all together in just a few days.”

“Even though we just met, it has been amazing. We worked really hard and really well together, and it has led to this amazing moment,” said anchor rider Albelo. “It was an honor and a privilege to be able to represent the U.S. at such a young age. I hope that these experiences will help us in future experiences at the grand prix levels and as members of a team.”

About the Palm Beach Masters Series® and Showgrounds at Deeridge Farms

The Palm Beach Masters Series® hosts top international equestrian competitors from across the U.S. and abroad. Beginning with one elite competition in 2016, the series has grown into one of the sport’s most reputable events. The show grounds are located at the spectacular Deeridge Farms, situated in the heart of North American equestrian sport in Wellington, Florida. Award-winning landscaping surrounds the custom-built show grounds and the facilities that host the series, which include two masterfully-created competition arenas – a Grand Prix turf arena and an all-weather sand arena. Additionally, there are two Bermuda grass schooling arenas—one designated for FEI and the other for non-FEI competitors—along with an all-weather schooling arena adjacent to the competition arena and another located near the stables. The events’ picturesque location, unrivaled hospitality, custom-built jumping rings and world-class facilities guarantee a unique experience for riders and spectators.

The best views for the 2019 Palm Beach Masters Series are from the Berkshire Bank VIP Club, an exquisite two-story venue for watching the top-level competition in both competition arenas. Club members are treated to special amenities and one-of-a-kind culinary creations from Delaware North’s Patina Restaurant Group. In addition to the gourmet food served, a complimentary open bar and table service are also included. Expanded hospitality options, including individual VIP Club membership and daily reserved tables, are available for the CSIO5* Longines FEI Jumping Nations Cup™ USA. For more information and to reserve a table, visit: www.palmbeachmasters.com/vip-hospitality/

Fun for the Whole Family

Further information on the Palm Beach Masters Series is available at http://www.palmbeachmasters.com.

Brought to you by Summit Joint Performance:

Summit Joint Performance helps your horse feel and perform their very best. Whether your horse has an existing joint condition or you’d like to prevent problems in the future, our proprietary formulation of chondroitin sulfate promotes a healthy, thick synovial fluid, decreasing inflammation in the joints and improving the cushioning properties of the cartilage pads. This helps prevent the risk of early-onset joint pain and keep our partners feeling younger and staying competitive longer. By giving a single IM (intramuscular) injection of Summit Joint Performance® each month, we can help protect the joints that are being damaged by the activities that we (and they) love.﻿