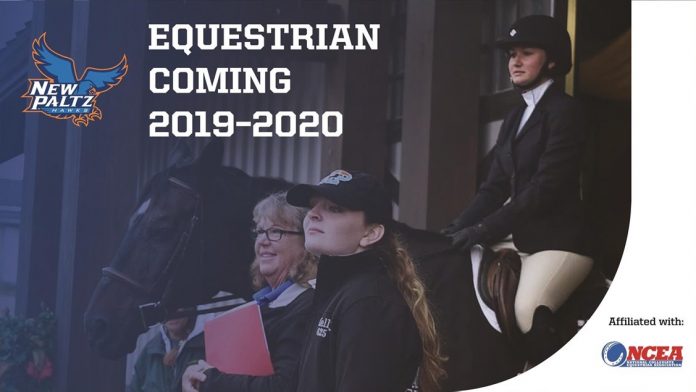 WACO, Texas – The National Collegiate Equestrian Association (NCEA) offers congratulations to State University of New York New Paltz on the announcement that they will add an NCAA Equestrian team to its already strong roster of women’s sports beginning in the 2019-20 academic year.

Dr. Leah Fiorentino, Executive Director of the NCEA, says that the focus on expanding educational opportunities through athletics has resonated with Division III athletic directors. Equestrian has been a popular sport on many Division III campuses and there is a new level of enthusiasm to add NCAA Equestrian to their sport inventory.

In 2002, Equestrian was recognized as an Emerging Sport for Women, a special designation by the NCAA to encourage more educational opportunities through athletics for women.  The NCEA is recognized as the body responsible for oversight of the sport until it reaches championship status. Equestrian utilizes a collegiate format which allows competition between schools in all three NCAA divisions; Sweet Briar College, a Division III team has shown early success in competing against Division I teams this past year. NCEA leadership continues to embrace this inclusive approach and will work closely with SUNY New Paltz during their inaugural season competing at the highest competitive level in college sports.

“We continue to support the efforts of Division III institutions to explore NCEA competition opportunities.  We spoke with Division III athletics directors at the recent 2019 NCAA convention who are committed to providing this type of competition opportunity for their student-athletes.  SUNY New Paltz will be the first Division III institution in the northeast to add this opportunity and they will take the lead in attracting riders from the northeast looking for a high quality Equestrian program. We are excited to welcome SUNY New Paltz Equestrian team to the NCEA!”

“I think like all of our programs right now they’ve all been on an upswing in terms of their overall success,” Robinson said. “The decision to add equestrian is another step in that direction. To take on a program like this who has had a long club existence and elevate it to a varsity level, we’re excited to be able to provide such a great opportunity for students of this caliber, and that is exciting.”

SUNY New Paltz announced the addition of equestrian and men’s lacrosse as its 16th and 17th varsity programs this past summer. The implementation of equestrian draws parallels to when the school added men’s volleyball as a varsity program. Like equestrian this upcoming year, the Hawks men’s volleyball team originally played universities from all over the country until there were enough programs to establish divisions.

Robinson believes the equestrian program has the potential to establish the same type of success as SUNY New Paltz men’s volleyball has had, which brought home a National Championship in 2016.

“Without a doubt. Like in men’s volleyball, there is a great opportunity to not only compete against the best, but then ultimately to have a Division III equestrian competition and championship,” Robinson said. “I think it puts us in a unique position not only because we are offering a unique sport like this, but giving the college a unique niche in terms of attracting students of this caliber. I think with time, like men’s volleyball, and like programs like that, as an emerging sport I think we’ll emerge in it.”

The SUNY New Paltz equestrian team will become NCEA championship eligible no later than the start of the 2020 season and is just the third Division III program to be added to the NCEA. Other Division III schools include The University of Lynchburg and Sweet Briar College, both located in Virginia.

Currently, there are 19 Division I and 5 Division II universities reporting an Equestrian team into the NCAA. “Interest by athletics departments across the country and across divisions is currently at the highest level in years” according to Tom O’Mara, Co-Chair of the NCEA National Advisory Board, “and given the opportunity NCAA equestrian teams provide for women in athletics, I’d expect this to continue to grow.”

The club equestrian team at SUNY New Paltz ran for 18 years before making the announcement it will make the jump to a varsity program this past July. The Hawks are in the process of finalizing their 2019-20 schedule in the NCEA, which will be announced at a later date.