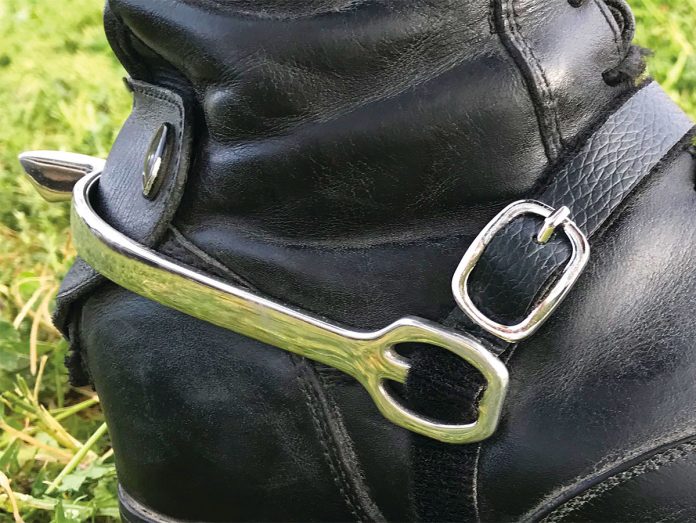 In his classic work of equestrian literature, Riding and Jumping, the legendary William Steinkraus repeatedly stressed the importance of good equipment. “Quality is the best economy,” he wrote; as true now as it was in 1961 when he originally penned the words.

Jill Howser took these words to heart when she created her innovative spur straps and founded Spur-Tech, her one-woman business bringing equestrians the best in spur strap technology. “The play in the spurs is unacceptable,” she says. Tired of traditional straps that allow spurs to shift and move on the foot, her straps promise the perfect connection between boot, spur, and horse.

Howser comes from an athletic background. Her father was a professional baseball player, and she herself became comfortable with sports growing up on the baseball field. She especially enjoyed skateboarding. “I went to the skate parks and got better and better, and became one of the girls who could really skate and was sponsored,” she said.

Everything changed for Howser when her mother died in a car accident when Howser was just 16. She didn’t want to be on the pavement as much anymore after that, and she and her twin sister, Jana, moved to San Diego where she got more into surfing. Her surfing career took off much as her skateboarding had, and she got noticed. She was invited onto a team, got the best surfing equipment available for free, and traveled all over the world. Howser eventually became the number two surfer in California and in the top 20 surfers in the world.

It’s no coincidence that it is the equestrian foot that draws so much of Howser’s focus. Both the skateboard and the surfboard require precision and a perfect connection between the athlete’s foot and the equipment. So traditional spur straps, with their imprecise connection to the boot, started driving her crazy when she got serious about her riding 16 years ago.

It was in the show ring that Howser’s realized she had a problem. She was riding a young horse, coming out of a turn, and when she added leg she could tell her spur was not quite engaging, resulting in a bad jump. Over the course of three George Morris clinics, she realized she could not establish proper connection when her spurs were able to shift around on her boots.

That sent Howser down the path of sorting out what needed to be improved in the design of spur straps, and Spur-Tech was born.

Spur-Tech spurs are made of a vegan leather substitute with a hook and loop closure that can’t be seen when the spurs are on the boot. Further, the closure won’t clog and get cruddy. The materials Howser sourced will not tear, stretch, fray, or get misshapen. We’ve all experienced leather spur straps that conform to the spur and can’t be adjusted – Spur-Tech solves that problem. Spur-Tech straps are also easy to use. They are so easy, even non-horsey helpers can put them on quickly

Further, the spur straps can be cut to fit any size boot, from a tiny toddler to a size 15 men’s boot. Spur-Tech straps are made to fit riders of every size and ability. There’s no guessing or measuring. Regardless of the size of boot, the spurs will not move. “I couldn’t have anything that failed,” Howser insists.

This technology means that Spur-Tech has perfected the foot to spur to horse connection. “As soon as you think about applying a leg aid, it’s done,” Howser says. The first muscle twitch of a horse about to fall behind the leg can be corrected comprehensively with one ask. “There’s no scrambling, no white noise. It’s calculated, clear communication, an accurate connection,” she explains.

Howser believes that Spur-Tech spurs solve the problem of the horse’s inside shoulder falling in a turn, or an unpackaged horse on the forehand. “I just wanted to share it,” she says. Howser appreciates the healing and empowering qualities of horses, and wants all riders to feel that they can ride their best.

Howser currently competes in hunters and equitation. She also appreciates the comfort of the Spur-Tech strap: “When you sink your heel, it doesn’t crush your instep and cut off the circulation to your foot.” Often we don’t realize the discomfort our equipment is causing until we try a product that relieves it. The Spur-Tech strap comes as close to perfection of fit as possible. And at under $30 a set, Spur-Tech straps are a very accessible game changer.

“You don’t even have to take your gloves off to put them on when it’s freezing,” Howser points out. In every way, Spur-Tech straps are solving problems riders may not even know they have.

“No one person can change everything but we all do what we can. I want to give back in some way, and whatever that is that I’m capable of, I will. It’s important,” she says.

This innovative thinking is what will change the future of equestrian equipment: addressing problems on the most basic level that will make it easier for all riders to enjoy their horses.

About the Author: Jess is a professional historian and educator who lives in northwestern Virginia. They completed their undergraduate degree in English at William & Mary, and did their masters and doctoral work at the University of Florida. Jess is an event rider with a passion for thoroughbreds, and has extensive experience in community organizing around queer identities, racial marginalization, and labor.
Read More from This Author »

From the Outside, In: Six Ways to Make Your Farm Shine in the Real Estate Market

From the Outside, In: Six Ways to Make Your Farm Shine...

EqRight: A tiny trainer clipped right to your helmet