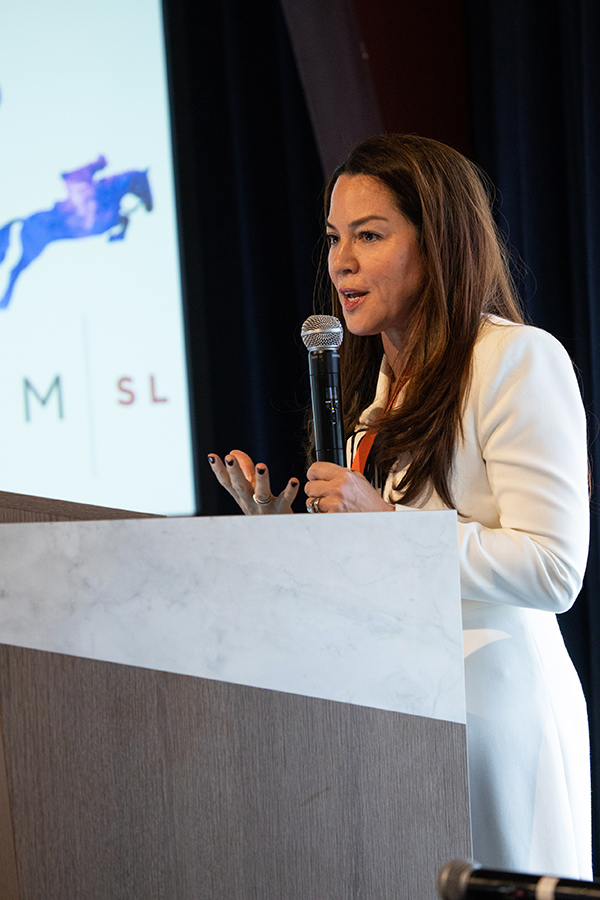 “The EUAEL Congress was a fantastic event and I am delighted to have been part of it,” said Lazarus. “Equestrian sport has grown exponentially on a global scale, which makes an event like this so important because it’s an opportunity for lawyers, veterinarians, riders, trainers, and regulators to get together and debate the pressing issues facing the equine industry.”

Attended by nearly 200 guests, the EUAEL Congress featured a number of well-respected speakers. Lazarus, who regularly represents equestrian athletes in anti-doping proceedings before the FEI Tribunal and Court of Arbitration for Sport, spoke about “Demystifying the FEI Equine Prohibited Substances List,” a highly important topic for international sport.

Prior to Lazarus’s speech, Emma Waters, a Morgan Sports Law Associate, started things off with a talk, “Pre-Purchase Evaluation and the Importance of Pre-Purchase Drug Tests.”

Other subjects addressed by featured speakers included: the Do’s and Don’ts of International Horse Deals; VAT in the Equine Industry; Non-conformity and Consumer Sale; and Pre-purchase Protocol, Cross-border Litigation. There was also a panel discussion. The full spectrum of the program can be viewed at www.internationalequinelawcongress.com.

Lazarus joined Morgan Sports Law in February 2018 after having spent six years at the FEI, first as General Counsel and then as Chief of Business Development & Strategy. Prior to that, she worked for the National Football League (NFL) for ten years in various legal and business development roles. Lazarus trained at the leading US law firm Akin, Gump, Strauss Hauer & Feld in Washington, DC before joining the NFL.

Morgan Sports Law is a boutique law firm devoted to sports arbitration and litigation. Its lawyers are known for their expertise in cases involving doping, corruption and eligibility disputes. The firm, based in London, England, represents clients before national and international sports governing bodies and before domestic and international courts such as the Court of Arbitration for Sport.

Lisa Lazarus may be contacted at Lisa.Lazarus@morgansl.com.  Further information about Morgan Sports Law is available at www.morgansl.com.

All Bets on Bertram as the Irishman Notches Another 2021 WEF...