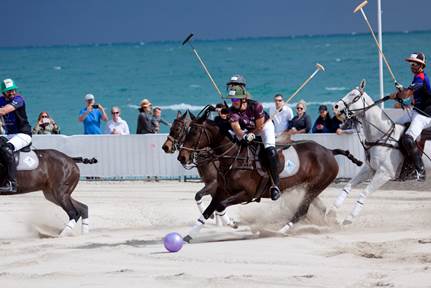 Miami Beach, Fla. (April 1, 2019) – Ponying up for a purpose makes good horse sense and Give Back for Special Equestrians is pleased to announce that it has been named the 2019 charitable partner of the World Polo League Beach Polo, Miami Beachtournament.

World Polo League Beach Polo takes place April 26 to April 28 on the shores of Miami Beach between 21st St. and 22nd St.  pitting some of the world’s greatest polo players and their Patrons in an electrifying ocean side equestrian competition. The event also serves as a major fundraiser for Give Back for Special Equestrians, an all-volunteer nonprofit that provides therapeutic horseback riding scholarships for disabled children and veterans in Florida, New York and Colorado.

“World Polo League Beach Polo connects some of the most decorated polo players with ardent fans and visiting beachgoers for one of the most unique and high-profile experiences in Miami Beach,” said Tito Gaudenzi, Founder of Beach Polo, president of the event organizer, Lifestyle Companies, and a lifelong polo player who will be competing in the tournament.  “As part of this year’s edition, it gives us great pride to have proceeds go toward Give Back for Special Equestrians — a cause that resonates so deeply with the equestrian world and beyond.”

“It is a tremendous honor to be aligned with this world-class competition,” said Sissy DeMaria-Koehne, Co-founder of Give Back for Special Equestrians.  “A partnership of this magnitude will further our mission to share the joy of horses and horsemanship with those facing some of life’s most difficult, physical, mental and emotional disabilities while also helping us grow our reach throughout the United States. We are extremely grateful to World Polo League Beach Polo for naming us their corporate social responsibility partner.”

Throughout the weekend-long competition, eight international teams will compete for the championship title through a series of daily matches.  Some of the world’s top players will be part of the action, including Nic Roldan, Alejandro Novillo Astrada, Jason Crowder, and Melissa Ganzi.

Give Back for Special Equestrians will benefit from funds raised at an exclusive cocktail reception on Saturday, April 27, as well as the “Charity Game” on Sunday, April 28, which begins at 2:15 p.m.  In addition to providing therapeutic horseback riding scholarships in Florida, New York and Colorado for youth and adults in need, Give Back for Special Equestrians aims to become a national fundraising vehicle for thousands of PATH-certified stables nationwide.  This partnership with World Polo League Beach Polo will help further that central mission.

The competition will be held on the beach at Collins Park, between 21st St. and 22nd St.  VIP daily tickets and weekend ticket packages are available for purchase, offering access to shaded lounge areas, a full bar and catering. General admission is complimentary to the public.  The weekend will additionally include a series of nightly activations and complimentary access to the adjacent Retail Village. Tickets can be purchased here. For additional event updates, announcements, and more information about World Polo League Beach Polo, visit www.miamipolocup.com