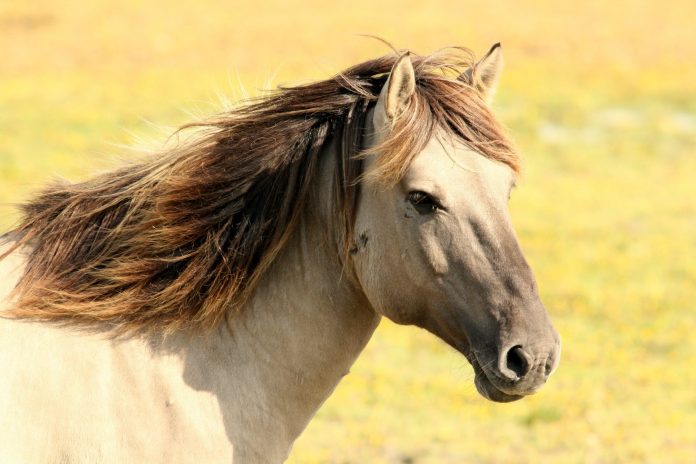 Horses are wonderful animals that have served humans from time immemorial. They have helped them cultivate land, build houses, wage wars, and transport things for centuries. In the era of technology, we’re less reliant on them and they’re gradually replaced by cars, planes, and different equipment.

Horses’ history goes back a long way and far exceeds that of their relationships with humans. The propalaeotherium, the most ancient and known form of the horse, was a relatively small animal with rudimentary hoofs. The first horses were so small that one could safely compare them with modern-day dogs. They lived in Western Europe and Asia and became extinct more than 30 million years ago.

Many equine species were replaced by other animals over time. Therefore, information about their most ancient representatives is not always available nowadays. Many types of horses disappeared during the period of human settlement. By taking over more and more space for their agricultural activities, people forced horses to displace, which usually led to their death. Over the past 400 years, the process of wild horses’ extinction has accelerated manyfold.

Many species of horses that until recently inhabited certain areas of our planet completely disappeared due to the onslaught of human civilization. At present, wild horses are extinct in Europe and America. So, horses can be one of the many interesting research topics for middle school essays. Well, nothing lasts forever and all species of animals disappear over time.

Read our article to find out about the popular horse breeds we can hardly see in the wild now.

About 200 years ago, tarpans lived all over the European continent, but now this is an extinct horse species. It is believed that tarpans were the ancestors of all contemporary horses. They lived in the central and southeastern parts of modern Europe. The forest type of tarpans was relatively small, and they reached only 50 inches at the withers. They were gray-brown with large erect ears, curly mane, and a short tail. Since tarpans lived in the forests, they were not good runners. So, when people started to hunt them using domesticated horses, they were quickly exterminated.

The steppe type of tarpans existed a little longer. These animals were fast enough to escape from hunters. Because of the development of agriculture, tarpans could not find an area where they could safely live. The meat of these wild horses was considered a delicacy, so people often hunted them.

The remains of this horse were found near the town of Hagerman (USA), so it was named accordingly. It is also called the Hagerman zebra. This animal is considered one of the oldest species of the horse kind. It appeared about three and a half million years ago. They looked like zebras and were small in size. These wild horses are thought to have gone extinct about 10,000 years ago due to climate change.

The average Hagerman horse was as big as the Arab horse. It was stocky and had straight shoulders, a thick neck, and a narrow skull. It is assumed that it had a thick vertical mane, medium-sized ears, striped legs, and stripes on its back. This horse probably lived in the meadows and floodplains 3 million years ago.

Wild quaggas lived in Africa and disappeared over 100 years ago. At present, a group of scientists from the South African Republic are working on herding these animals. A small number of domesticated quaggas can be found in some zoos.

They were a subspecies of zebras and had striped heads. The rest of their body was similar to that of an ordinary horse. They were extremely trusting and quickly accustomed to the presence of man. Quaggas were used to guard livestock — when a predator approached, quaggas began to neigh loudly, thus alerting humans to their presence. Nevertheless, aborigines hunted them mostly because of their tough hide.

This kind of horse was first bred in Germany in the early Middle Ages. Back then, knights used heavy metal armor, so they needed hardy horses capable of carrying heavy weights during marches and battles. Apart from being incredibly strong, these horses also had several drawbacks. They were not able to travel long distances and couldn’t jump because of their weak heart. Also, they were afraid of water and needed plenty of food and frequent rest.

Destriers had one unusual feature — they never lowered their ears and always kept them up. The height of these horses ranged from 5.5 to 6.5 feet in the withers, and their weight was approximately 2,200 lbs. Today, this breed does not exist, but it gave birth to a number of new breeds of heavy horses.

A striking example of horse extinction is the Przewalski’s horse, which was discovered and described only 100 years ago. It is not currently found in the wild. These animals lived in the rocky uplands of Mongolia and the Far East. Now, we can see these horses only in some zoos and nature reserves. Their total number does not exceed 400 specimens. Przewalski’s horses living in zoos became accustomed to man, and they are unlikely to survive in their natural habitat.

The animals are relatively small — about 50 inches in height and weigh 550 lbs. They are incredibly hardy as they are accustomed to continuously searching for food in arid areas where it is particularly scarce in winter. These horses are strong, smart, and highly social.

We’ve looked at only some of the numerous extinct horse breeds. Horses are beautiful creatures, and they can impress any person. Unfortunately, some breeds went extinct because of man. Now, experts are trying to take care of rare breeds of horses by creating special conditions for them and protecting them by law.

What Horse Breed You Are Based On Your Zodiac Sign