Home Press Release FIRST EDITION OF THE HUBSIDE SPRING TOUR: A FRENCH VICTORY IN THE... 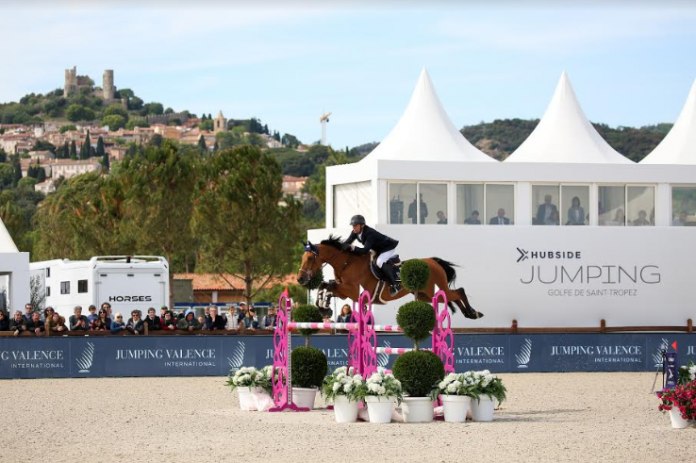 Fifty horse and rider combinations qualified for the class, among them, the best ones on the current international circuit, and only 7 went through to the jump-off of the closing Grand Prix of the first CSI 4* Hubside Spring Tour in Grimaud. Uliano Vezzani, the Italian course designer, built an initial course in the huge ring of the Ecuries du Golfe de Saint-Tropez, which was technical with a tight time, in which the leading riders came unstuck.

Neither the Columbian star Carolos Lopez, nor the current French Olympic team silver medallists, Roger-Yves Bost, Philippe Rozier and Pénélope Leprévost, and not even the World number 1, three-time winner of the Longines FEI Jumping World Cup Final and 2012 Olympic Champion, Switzerland’s Steve Guerdat, found the key to this first round. This goes to show the merit (and the skill) of the seven riders qualified for jump-off of this Grand Prix, boasting 150,000 euros of prize money.

Belgium’s Gudrun Patteet, first to go in this jump-off, riding the stallion Sea Coast Valdelamadre Clooney, had a rail down on oxer number 10, and finished her weekend on the French Riviera with four faults. It’s always tough to go first in a jump-off.

Canada’s Kara Chad had the same result, riding Quidamo F, who knocked a rail down on the second element of the double. The first opportunity for France, in the presence of Guillaume Foutrier on Valdocco des Caps, delighted the public in the stands of the Hubside Spring Tour, achieving the first double clear! Italy’s Piergiorgio Bucci on Deniro, Great Britain’s Amy Inglis on Wishes and the second French rider in the jump-off, Marc Dilasser, riding Arioto, as well as Israel’s Tressy Muhr with Jimmy du Lys, also jumped clear, but in a time slightly slower than the leader Foutrier.

The rider from France’s Nord department thus dominated the class despite some serious competition. He was followed in second place by the Italian Bucci and in third place by Normandy’s Dilasser; on the first week, this same 4* Grand Prix was won by another French rider, Patrice Delaveau.

“There weren’t a great number of jump-off riders today, but this Grand Prix was very interesting. I am delighted with Valdocco Cups who has gained a lot of experience at this type of show. It was the first time that I used a hackamore again: so he was free to canter and we had a great jumping technique! Now we’re off to Le Touquet then the CSIO of La Baule”, said the winner of the day.

Organised from 17 to 28 April by the international rider and successful show jumper Sadri Fegaier, the first edition of the Hubside Spring Tour played host to 400 horses competing in 33 classes. The quality of the footing, the size of the ring and the paddock, and the enthusiasm of the organisers appealed to the riders.

The Hubside Jumping, the next competition bearing the Hubside colours, organised at the renovated Ecuries du Golfe de Saint Tropez, will take place in June, with three weekends, whose keyword once again will be excellence. Save the date: the first event will be from 30 May to 2 June.

TAKE2 10th Anniversary Donor of the Month: Emmich Making Sure the Horses...