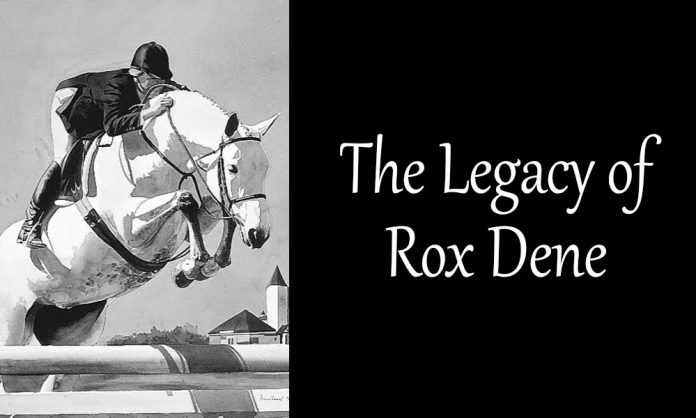 It is 1994 and the Winter Equestrian Festival in Wellington, Florida is in full swing. Horses everywhere- hunters, jumpers, equitation, ponies. Horses walking down the path that cuts through the show grounds- coolers marked with iconic names such as Goodman, Wetherill, Lindner, Fogel, Wheeler, Baldwin, Boylen. The usual measured chaos of the horse show day as trainers, riders, grooms, and owners travel to their appointed ring for the next class.

In the schooling area of the Grand Hunter Ring (as it was known at the time), a black haired man with skin tanned to the color of leather, stands next to a set of standards holding a four foot plus square oxer. “One more time, Elizabeth,” he yells. A big grey mare approaches the mammoth jump with beautiful balance and cadence. Galloping up to the base as she had been trained to do, she explodes off of the ground to a stunning height and bascule, landing evenly on the other side and cantering away. “That’s good,” he says, and heads up to the ingate.

With Elizabeth Solter in the irons, the mare enters the ring at a slow walk. Helmet pulled down just above her eyes, Elizabeth’s expression never changes- all icey coolness and concentration. Her signature entrance is a slow walk to the middle of the ring, never rushed, never pressured. It is their time and they would take as much as they wanted. Breaking into a canter, the pair head toward the first jump- Elizabeth in her short stirrups, short rein two point and the mare in her rocking, athletic canter.

The rest, as they say, is history. We never missed an opportunity to watch Rox Dene. We never grew jaded at the wonder of this pair – the consistent excellence, all of the superlatives that they earned. Best Hunter Ever. Horse of the Century. I remember her well as witness to the horse, rider, and trainer team that represents a seminal moment in the hunter discipline- the advent of the warmblood. When Rox Dene arrived on the show hunter scene, many of the stars were Thoroughbreds. The Wizard, Sea Wasp, Western Prospect, Stetson, Northern Rollick- too many for me to remember. When she retired in 1996 at the age of ten, she had changed the game forever.

Rodney Bross, the only trainer of Rox Dene, recalls the first day that he saw her at a horse show in Katy, Texas. His friend, Heidi Austin, had a young gray horse in the barn that was bred in Virginia and sent to her to sell. While she had talked to another trainer about looking at the mare, she told Rodney that he could see her that day. At the time (he approximates 1990), Laura Kent (Kraut) was his rider. She rode the mare into the indoor at the show and flatted her around the ring. The four year old wore heavy shoes, carried a beautiful rhythm, and had no lead change. “I told Laura to go ahead and jump the X in the middle of the ring. I saw her jump one jump and said, ‘That’s good for me. I’m buying her.’ The other guy didn’t have a chance.” Bross laughs at the memory. They did a pre-purchase exam that day and bought her with no further trial. Ironically, Rox Dene’s sire, Aristos B, was also at the Katy show with Alan Korotkin. “I had the whole family there,” Bross chuckles.

Soon, Elaine Boylen bought her, renamed her, and Laura Kraut became Rox Dene’s first rider. Bross credits Kraut with putting a solid foundation on the mare. “Not many people know that Laura started Rox Dene. She did a beautiful job with her and took her time teaching her lead changes. We showed her a few times as we moved from Texas up north. I think she was Champion every time.” In her entire career, Rox Dene had three riders: Laura Kraut, Bert Mutch, and Elizabeth Solter. (note: Megan Johnstone showed her a few times in the latter part of her career).

Bross, Solter, and Rox Dene forged a winning combination in the Working and Conformation Hunter divisions. From Florida to Devon to Indoors and everywhere in between, they won at every major horse show in the east. WEF, Tampa, Devon, Lake Placid, Ox Ridge, Fairfield, Vermont, Hampton Classic, Capital Challenge, Harrisburg, Washington, The National. Asked about his favorite memory of Rox Dene in the ring, Bross responds, “I was proud of her everywhere. She was my best friend. We knew each other so well, truly like a friend.” Every time that the mare walked into the ring, she was the one to beat, the marker against which others were judged. Horse traders would tout their young horses as “the next Rox Dene.” Of course, none were. Standing 16.1 and a bit, she seemed larger because of her density. Retired at ten years old, she seemed older because of her fame.

I am proud to say that Rodney, Elizabeth, and Elaine were good friends of mine and I remember when they decided to retire her. She was sound, she was happy, she had won it all. The team decided that they would stop with her before she started to descend from atop Mount Olympus, before she started to lose the spark and athleticism that marked her as a super horse. It was not for her to drop down from 4’ to 3’6” to 3’ as her body aged and her ability waned. She left the ring strong, victorious, a symbol of the aspirations of our sport.

Elizabeth Solter succumbed to breast cancer in 2014 after a valiant fight. I will always picture her as she entered the ring on every horse- composed, relaxed, on her own time. She was a rider, a horsewoman, a mother, a friend whose legacy endures. Rodney Bross continues to train horses successfully in Maryland and Elaine and daughter Chanda Boylen live in Virginia. Rox Dene died last month at the venerable old age of 33. There will never be another horse like her; there will never be another reign like hers. And, while the horse show world has changed since 1996, we all continue to search for the next Rox Dene.

Dominique Mungin: It’s All About the Moments