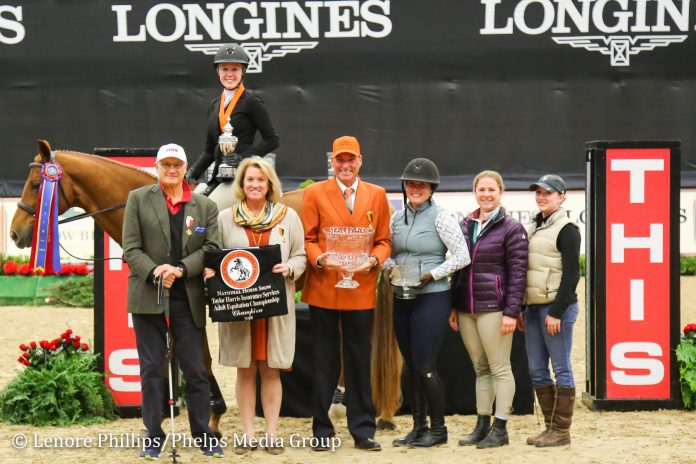 Lexington, KY – June 21, 2019 – The National Horse Show has announced its selection of esteemed hunter and equitation judges for the 2019 competition, set to take place from October 25 – November 3. The organizers are proud to welcome Jimmy Torano and Tamara Provost as judges for the ASPCA Maclay National Championship, renowned judges Ralph Caristo and Linda Hough for the hunter divisions, and Mary Lisa Leffler and Emil Spadone for the Equitation Championships.

A professional rider since 1994, Leffler has accumulated many wins in both the grand prix and hunter arenas. Previously, Leffler was under the tutelage of the legendary Jack Stedding and has since continued her education as a horse woman to advance her own business, Rolling Acres Farm. Her judging experience is extensive and includes presiding over the USEF Medal finals in 2016.

From October 29 – November 2, the nation’s best hunter riders and horses will take center stage in the Kentucky Horse Park’s Alltech Arena under the watchful eyes of the National Horse Show hunter judges Ralph Caristo and Linda Hough. Working in unison, Caristo and Hough will bestow championship titles to the country’s leading hunters in the junior, amateur and professional hunter divisions.

Caristo, of Wellington, FL and Saugerties, NY stands today as an incredibly influential figure in the world of horse shows. The registered “R” judge and inductee of the National Show Hunter Hall of Fame boasts extensive judging experience at all of the most prestigious horse shows in the country. For fifteen years, Caristo has been the Chef d’Equipe for the Zone 2 Young Riders and Prix des States teams. As further testament to his contributions to equestrian sport, last year, Caristo was presented with a Lifetime Achievement award from the United States Hunter and Jumper Association.

Also an inductee of the National Show Hunter Fall of Fame, Hough has always focused on horsemanship. In 2004, the Wellington, Florida resident was recognized with an American Hunter Jumper Foundation Lifetime Achievement Award. Hough’s seat in the judges’ booth marks her return to the Alltech Arena after last judging at the National Horse Show in 2013.

The prestigious ASPCA Maclay Championships will return to the Alltech Arena in 2019 also with a star-studded grouping of judges. Founded in 1933 the Maclay Championships was the first “big equitation” final to exist. Today, the Championship trophy marks a great accomplishment for 85 past champions that excelled in horsemanship both on the flat and over fences. As the contenders for the 86th title put forth their best efforts, they will be judged by Jimmy Torano and Tammy Provost.

Torano, a highly respected member of the equestrian community, is an international grand prix show jumper and decorated top hunter rider. The two-time World Cup Finalist has been competing at the grand prix level since 1989 and has since built up his own show barn, JET Show Stables, Inc. in Wellington, FL and Mohrsville, PA. Amidst running his training and sales operation, Torano also serves a USEF “R” judge. Holding an impressive resume of judges’ booth appearances, including the 2008 ASPCA Maclay Championships, Torano has played a significant role in naming the champions of many prestigious competitions.

To partner with Torano in judging the final is renowned hunter rider Tamara Provost. No stranger to judging equitation championships, Provost most notably judged the 2017 Dover Saddlery/USEF Medal Finals alongside Jack Towell at the Pennsylvania National Horse Show. Provost has been invited back to judge after successfully serving as a judge for the National Horse Show Equitation Championships in 2018.

To learn more about the National Horse Show, click here.