Home Press Release From The American Tradition of Excellence to the West Coast Pony Plethora... 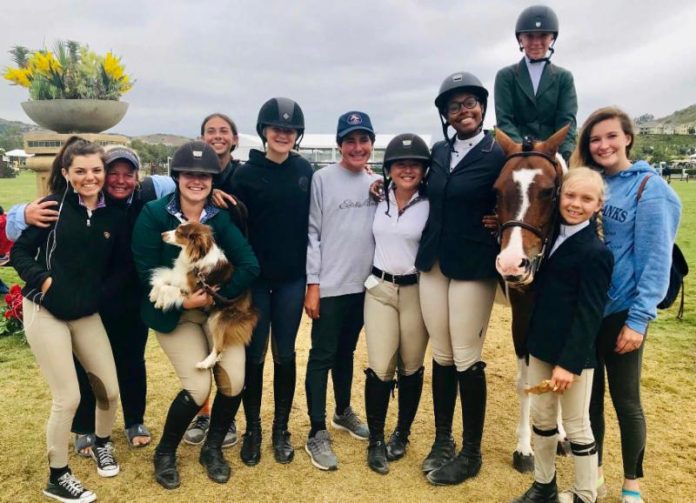 It All Happened at Blenheim EquiSports June Classic 3

June 24, 2019 – San Juan Capistrano, CA – Starting with the American Tradition of Excellence in the Equitation ring with over ninety entries to a plethora of pony events and a National Derby of with over fifty entries, the third week of the Blenheim EquiSports June Series was chock-full of competition, education, and social events. The small, medium, and large ponies gathered in the Pacific Field on Wednesday afternoon for a model clinic and the pony fun continued for division competition, classics and derbies, a horsemanship test, lots of tasty treats, and special awards into the weekend.

On Wednesday afternoon, National Show Hunter Hall of Fame 2019 inductee, Carleton Brooks, along with his wife, Traci, hosted the first pony event of the week. Riders of all ages and pony divisions were able to bring their mounts to the Pony Model Clinic to learn technique and how to handle their pony’s personality.

“Our goal with the modeling clinic is to help the up and coming pony riders understand why we model, what the judges are looking for, and how to make the best of their pony’s traits. The kids were great and it was fun to watch them in the models the next day using what they learned,” noted the Brooks of Balmoral.

Calabasas Saddlery sponsored gift bags for all the participants, including Gumbits , chewing gum for horses and ponies. Once the clinic finished, everyone was invited to a reception with refreshments, snacks and time to hang out with friends.

Along with the first day of pony classes, pony riders of all ages took the Emerson Burr Horsemanship Test, a written horsemanship quiz and hands-on test.

The winners of each age group in the Emerson Burr Horsemanship Exam were awarded a $100 Educational Grant from US Equestrian and a gift bag from Calabasas Saddlery. In the 15-17 age group, the highest score was Augusta Iwasaki. In the 12-14 age group, Katherine Simonds earned the highest score. Hailey Eynon was the top quiz taker of the 9-11 age group. And Chloe Eynon was best of the 8 & under group. After racking their horsemanship brains, everyone was invited to relax and enjoy a Cupcake Party.

After two full days of model, under saddle, and over fences classes, Heavenly Patch of Blue, owned by Enchantment Farms LLC, and Shiloh Roseboom earned 45 points in the Small Pony Hunter division. As the pair with the most points in all three divisions, they were also awarded the Overall Grand Championship title in the West Coast Pony Challenge, presented by USHJA Zone 10 . Along with the title, Roseboom’s name will be added to The Perpetual Trophy, donated by Willow Brook Stables.

The Reserve Championship in the Small Pony Hunter division went to by Lauren Padilla and Highland Farms LLC’s entry, Just Right with 23 points.

Recognized as the Overall Reserve Grand Champion in the West Coast Pony Challenge, as well as division Champion, Tessa Buchanan and Katalina Rickard’s Elite Hollywood Smoke accumulated a total of 26 points throughout the two days of competition in the Medium Pony Hunters.

The Reserve Champion honors in the Medium Pony Division went to Roseboom aboard Enchantment Farms LLC’s Beach Boy, who earned a total of 24 points throughout the two days of competition.

In the Large Pony Hunter division Paige Walkenbach’s Front Row, ridden by Juliette Joseph, was Champion with a total of 25 points. Also earning 25 points in the division, but with fewer points over fences, Skylar Wireman took the Reserve Championship with Heather Hormor’s Half Moon Bay.

Saturday afternoon concluded with the USHJA Pony Hunter Derby, presented by Markel Insurance , and an ice-cream social. With scores of 83 and 85 points for a total of 168, Wireman and Half Moon Bay led the victory gallop. Wireman was also third with GoWin Peek A Blue, Leslie Pinkerton Nelson’s Small Green Pony, who earned a total of 150.5 points in the Derby.

“Half Moon Bay was great in the derby today and is such a nice pony to ride. He is proudly offered for sale,” Wireman noted, “I was also really proud of GoWin Peek A Blue, who was great in his second derby ever and the first handy round he’s ever done.”

The Reserve Championship in the USHJA Pony Hunter Derby went to Roseboom, aboard her trusty steed Heavenly Patch of Blue, who received scores of 85 and 76 over the two rounds of competition, totaling 162 points.

The Makoto Farms Best Turned Out award for the Pony Hunter Derby went to Beach Boy the 6th place finisher. Alfredo Perez was awarded the one-hundred-dollar prize for a perfectly turned out pony.

After the victory gallop and Derby prizes were distributed, the Makoto Farms Circuit Pony Derby Awards were given to the Small, Medium, and Large Pony and rider combinations earning the most points from this season’s pony derbies, which were held during Blenheim’s Spring Classic 3, June Classic 2, and June Classic 3.

The Leading Small Pony Award went to Roseboom and Heavenly Patch of Blue, who was the Derby winner at Spring 3 and second this week, earning a total of 24 points, a beautiful ribbon and a “Painted Pony” trophy.

The Leading Medium Pony Award was a tie between Mariah Durand and Posh Dressed to the Nines, and Mia Burlington and Calypso, who each earned second place prizes at the Spring Classic 3 and June Classic 2, respectively, totaling 9 points.

In the Large Section of the USHJA Pony Hunter Derby circuit awards, it was Paige Walkenbach and D’Artagnan who galloped away with the victory, earning 15 points from their Derby win at June Classic 2.

On Saturday and Sunday afternoons, green ponies of all sizes took the grass field to compete in the final portion of the West Coast Pony Challenge, presented by USHJA Zone 10, and it was Wireman who emerged as the Overall Grand Green Pony Champion with Jimmy Choo. Wireman and Anya Bereznicki’s large pony accumulated a total of 41 points over the two days of competition. They topped the Large Green Pony Hunter section and also received a total score of 166 points in the Green Pony Hunter Classic to finish the weekend with another victory.

The Reserve Championship in the Large Green Pony Hunter division went to Tessa Buchanan and her own pony, Black Tie Affair, who earned a total of 28 points throughout the two days of competition.

Wireman also piloted GoWin Peek A Blue to the division champion as well as the Overall Reserve Grand Green Championship, finishing with a total of 27 points accumulated in the Small and Medium combined Green Pony division.

Thank you to Outdoor Outfitters for sponsoring all the beautiful West Coast Pony Challenge scrim sheet awards. “We’re happy to make this week special for all of the kids competing, their parents, and their trainers,” said the Outdoor Outfitters owner, Tonia Looker. “The pony kids are the future of our sport and it’s rewarding for us to applaud their success.”

Glenn Hartigan and Picadero 16 Rise to First Place to Conclude...