Home Blogs Outside the Ring Miracles at the Base of Mini Mountain: Healing and Love at the... 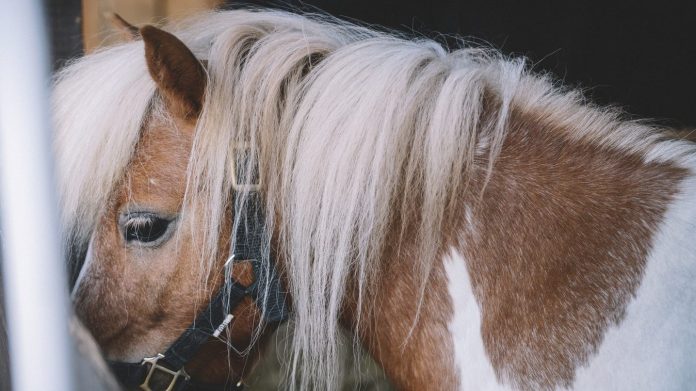 We share the same name, this pony and me. She was rescued from starvation and brought to the So Cal Mini Horse Sanctuary. Jeanne Oliver, founder of the sanctuary, asked me how I would feel if she named the pony Dixie. “Honored,” I told her.

Clumps of Dixie’s coat were falling out from malnutrition, her hips stuck up in the air, eyes dull and lifeless, and she was full of worms. She didn’t even have the energy to swish away the flies. After an exam it was determined she was about twenty years old, expecting a foal and frightened. There was concern for the health of the foal.

After five months of nourishing food, Jeanne’s care, and volunteers brushing the neglect away—she started to trust, started to change. Her eyes came to life. Dixie gained weight, and with time became a beautiful shiny horse. Never again will she go hungry or be neglected.

On August 13, 2018, Dixie gave birth to a filly named Magnolia. She is healthy, strong and already has a nickname, Maggie. She has a tiny body, long legs, a sorrel coat with a blonde and reddish tail, and a star on her forehead. Dixie and Maggie are protected and loved by many people.

My time volunteering at the sanctuary two mornings a week gives me the opportunity to witness many miracles like this.

Belle, an older mini, came in with front hooves to grow so long they looked like elf shoes, curled up to the point she could barely walk. With the help of a farrier, pain medication, love, and nurturing she slowly improved. After six months of good care she was actually trotting. A miracle, wouldn’t you say?  Belle will always have a home at the sanctuary.

I haven’t met a horse who doesn’t like a carrot. The only caution is the minis must be fed the smaller size, because they can choke on large ones. Occasionally, a carrot is the secret to making a connection with one of the horses—especially if they are frightened. The horse I sponsored, Maddie, was rescued from an auction (very often a kill lot) and was afraid of humans. Jeanne suggested I spend time sitting in the corral with Maddie. For a month, I would sit in a chair in the paddock, often with my eyes closed, a few times a week while Maddie learned to trust me. One day, something brushed my hand. Opening my eyes, Maddie stood in front of me. A brief interaction, but a beginning. After that, I bought carrots and she came up to me to get some, only staying for a moment or two. I owe it all to the carrots. Other volunteers spent time with her too, and slowly she began to trust. Eventually, a loving family adopted her.

The goal is to try to rehabilitate the horses so they can be adopted. There are strict policies for one to adopt, but it ensures the minis go to good, loving people who have the means to take care of them and want the best for the horses.

A kind soul saved Little Girl from an owner who kept her under a porch. The only food she had was from a gardener who fed her grass clippings once a week. With time, a nourishing diet and love Little Girl is no longer the emaciated mini that came to the sanctuary. Very often she is the greeter at the gate, a clever filly who learned how to unlock gates until the latches were changed.

During the day, some of the minis are let out of their corrals so they can roam about the property to run with mane and tails flying. There is something about watching a horse who was abused now feel safe to run and play.

Gracie is a beautiful black and white pinto. Her hooves were neglected, and she was very thin when Jeanne rescued her. She will continue to receive help from a knowledgeable farrier, healthy food, pain medication, and checkups from a veterinarian. Gracie has improved since her arrival. I visualize her trotting around the property some day, but in the meantime she is well cared for and many have a great affection for her. Everyday her gate is opened, and she walks very slowly to a sandy area and lies down for her morning nap. With all she endured, Gracie has remained a sweet natured horse.

Brittnie was an orphaned, newborn filly someone was trying to sell on Facebook. Her mother had been killed by a rattlesnake. When Jeanne purchased Brittnie to bring the tiny foal to the refuge, her umbilical cord was still attached. She didn’t do well on the milk they tried to provide for her, so Jeanne decided to put the foal in with Rose, who was already nursing her own filly, Penny. Rose took  Brittnie in as her own and nursed both babies. Rose in a generous soul. She makes me want to be a better person.

Winston, a dwarf mini, was born with deformed legs. He was rescued from a place of neglect. Sometimes humans breed the minis, trying to get the smallest one possible for fame and money. Often these exceptionally small foals are born deformed in some way. In spite of his handicap, Winston has a huge ‘can do’ spirit. He is sweet natured, and likes to be groomed. I have seen him close his eyes and completely zone out with pleasure from brushing. One of the talented volunteers built a miniature barn (Sir Winston’s Inn) for Winston and his friends.

As a volunteer, I am part of the poop patrol in the mornings. With 30-50 horses there is a lot of manure to clean up. No matter how much mucking we all do, there is usually a fresh deposit made by one of the minis before we leave the area. I love being in the corral with horses and listening to them munch on the hay. It is a sound of contentment.

This place is a sanctuary, and not just for the horses. A feral kitty saved himself by wandering in on his own. He likes to hang out with Gracie, and I think he knows he has found a home at a very special place. He has been named, George. There isn’t a human being, horse or cat whose life isn’t forever changed once they come to the sanctuary. Miracles will continue to happen at the base of mini mountain.

Dixie Ayala has been writing life stories and poetry since 2001. She started volunteering at the So Cal Mini Horse Sanctuary in January 2018.  Since that time, she has been writing stories about the horses. Each mini has a story to tell.

So Cal Mini Horse Sanctuary exists as a 501(c)3 nonprofit to rescue, rehabilitate and rehome neglected and abused miniature horses. 100% of all donations go directly to the minis in our care. So Cal Mini’s focus is to rescue minis from any situations of neglect, abuse, or abandonment and bring them to our sanctuary for rehabilitation. Through love and nourishment, we work heal to the mental, physical and emotional health of each mini in hopes that they will one day find wonderful “forever homes”. There is a wonderful network of angels that raise funds and pool resources to save as many of these horses as possible in hopes of offering them a new start in life where fear and neglect is left behind and replaced with love and trust. Our sanctuary is grateful to be chosen as the new home for many of the rescued minis, giving them the second chance they all deserve. Accreditation: Global Federation of Animal Sanctuaries.

The inaugural $2500 Equestrian Voices Creative Writing Contest celebrated stories written by and for horse lovers from all over the world. We were inundated with amazing narratives about triumph, loss and the deep emotional experience that is being with an amazing horse. To learn more about the 2019 contest, visit theplaidhorse.com/write.

The Locations and Horses That Make It The Silver Screen