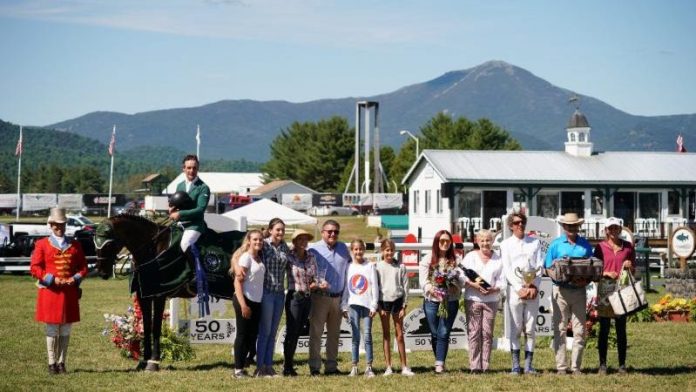 Babington turned in three of the seven clean rides over the 16-effort, first-round course designed by Bernardo Costa Cabral of Portugal and then had the only three clean rides over the eight-jump tiebreaker course. He rode first in the jump-off on Shorapur, a 14-year-old, Hanoverian mare, and set what proved to be the winning mark, coming home clean in 33.212 seconds.

“I’ve been pinching myself ever since my last round. I never would have foreseen something like this happening,” said Babington following his fourth Grand Prix win in Lake Placid. “My horses have been in really good form and I was hoping for a couple of good rounds, but if someone had wanted to bet me that I’d be one-two-three, I never would have taken the bet.

“I think I had the luck of the Irish with me. Shorapur had a really hard rub at the third-to-last fence of the first round and easily could have had it down. She’s the fastest of my three horses and normally I’d prefer to have her go last; but since she was first I decided to go for broke and it all just played out beautifully after that.”

Babington’s performance, coupled with his second-place finish in the first week’s $100,000 Prevost Richard M. Feldman Grand Prix, earned him the Richard and Diana Feldman Perpetual Challenge Trophy for Excellence and $2,000 as the rider winning the most prize money in Lake Placid’s two Grand Prix events. Also, Shorapur’s groom, Petra Srnec, won $200 from The Grooms Award, Ltd., a 501(c)3 not-for-profit organization, together with an engraved grooms bag, compliments of SmartPak, containing a variety of gifts including OutSmart bug repellent, Sterling Essentials tack cleaner and Limber Up from Back on Track.

Earlier in the day, Jimmy Torano rode Argentus to the win in the $15,000 USHJA International Hunter Derby presented by Eastern Hay & Purina Animal Nutrition. In winning the Derby for the fourth consecutive year, Torano rode Argentus, owned by Isalou, Inc., to a first-round score of 172, which placed him second to the 181 turned in by David Wilbur on Charismo. Torano then scored a dazzling 198 in the Handy for a two-round total of 370 to claim the win with Wilbur placing second with 365.5 after scoring 184.5 in round two.

“Coming into the Handy in second place I knew I had to pull out all the stops,” said Torano. “There was an inside turn that was really quite difficult; I did it and then I just let him gallop to an oxer at the end of the ring. There was another inside turn and then I let him fly to the last two-stride. He was just phenomenal today.”

Walker then topped a field of 34 horses with two fault-free rides and the fastest jump-off time of 34.663 seconds on Gidora S in the $10,000 Crowne Plaza Resort & Golf Club Junior/Amateur-Owner Jumper Classic, a member event of the Hollow Brook Wealth Management Show Jumping Hall of Fame Jumper Classic Series. Placing second was Yasmin Rizvi who had a clean jump-off ride in 35.268 seconds on Dasino with third going to Samantha Kasowitz who was clean in 35.295 seconds on Charlie.

“This mare is owned by Danielle Torano and she is amazing,” said Walker. “This was my first time ever riding her. In the jump-off, I rode her really fast to the two oxers, the one in the middle and the one on the outside, and I think that’s where I saved the time that gave us the win.

“In the Kathy Scholl, I just tried to turn in as smooth a ride as I could in the first round and then hold it together in the second round and hope the judges liked it.”

The final day’s action also saw a win by Brianne Link in the $7,500 Taylor Rental & New Holland Low Amateur-Owner Jumper Classic. Link topped a field of 35 horses by riding Wednesday Mornin to two clean rides and a jump-off time of 23.860 seconds. Flora Manship placed second on Endgame with a jump-off time of 25.082 seconds. Kendra Gierkink placed third and fourth on Crack Uno and Zemilion with Link adding a fifth-place finish on Cortina 186.