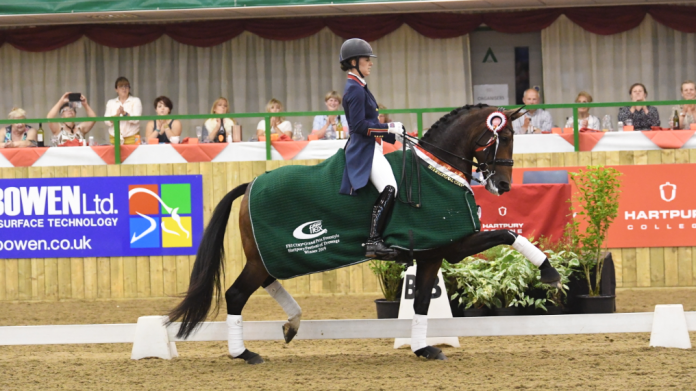 Portugal’s Luis Principe brought down the curtain on this year’s Hartpury Festival of Dressage with a victory in Sunday’s Equikro FEI CDI Intermediate I Freestyle. The win was a fitting way to conclude a week of dazzling international performances, world debuts and stunning displays.

With 14 nations represented, the festival lived up to its international credentials and offered team selectors an insightful preview ahead of the European Championships later this summer.

Friday evening also gave crowds their first opportunity to see the hugely talented combination of Charlotte Dujardin and Mount St John Freestyle. Drawn last in the Hazlewoods FEI CDI Grand Prix, spectators stayed on late to witness the pair notch up a score of 82.979%, just short of their Grand Prix Special score at Bolesworth a few weeks ago.

The 10-year-old daughter of Fidermark danced her way to a huge winning score and personal best of 87.6%. Emma and Jill Blundell’s mare earned no less than 86% from the judges with two even awarding the pair 89%.

Speaking to Horse & Hound after her performance, Charlotte said “I’m absolutely thrilled because the degree of difficulty is immense; it is one thing after another and there is no room for error at all. On the last centre line I really didn’t know if I was going to stop — she was still raring to go.”

“I don’t know what it is about that horse, but she makes me cry every time, and that music feels so magical to ride to.”

Gareth Hughes was in particularly good form on Friday too, following up an earlier win on Sintano Van Hof Olympia in the Freeflex FEI CDI Prix St Georges (72.324%) with a third placing aboard Classic Briolinca in the Hazlewoods FEI CDI Grand Prix (75.696%).

Elsewhere on Super Saturday, Charlotte Dujardin notched up yet another win in the Equine Construction Advanced Medium 98 with her own and Carl Hester’s Hawtins San Floriana on a score of 75.79%.

If the young equine talent on show is anything to go by, the future of the sport looks promising. In the Hickstead 5-Year-Old National Qualifier, Abigail Lyle took the top spot with the De Niro bred gelding Jefferson P on a score of 8.1. In the international equivalent, it was the Franziskus bred gelding Time Will Tell that reigned supreme under Martina Ott. The Hickstead National 6-Year-Old Qualifier was won by Michael Eilberg and the Dante Weltino bred MSJ Dante VX on a score of 8.82 with the international equivalent won by Mia Mordecai-Smith and the Johnson-sired Innocent with a score of 7.6.

Young human talent was on display during the final day with Soraya Rogers and Evita I winning the Andrews Bowen Junior, Young Rider and Pony Team Test with a score of 69.64%.

Alice Peternell and Hillgarth Nixon proved popular winners of the British Dressage Young Pony Finals for 4-year-olds on a score of 7.48, while Bryony Goodwin and RSC The Ogopogo, and Jayne Turney and Hikins Showgirl claimed the 5 and 6-year-old finals respectively.

Sunshine beamed down on Hartpury for much of the festival and attendance figures were near 5,000 across the five days.

The Hartpury Festival of Dressage returns in 2020 just a month before the Tokyo Olympics. The event is already anticipated as the last chance to see some of the world’s best combinations in action before the Games.