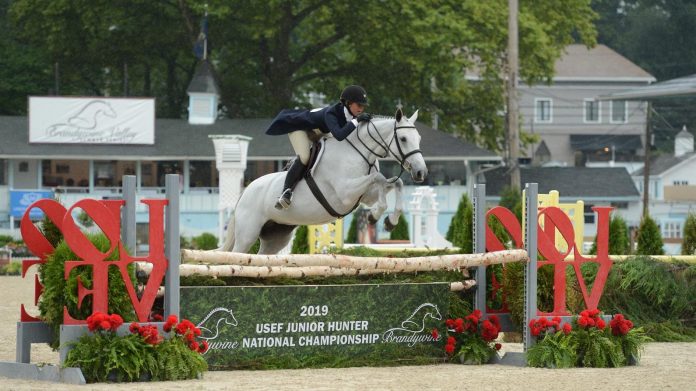 “This is my first time coming to Brandywine for Junior Hunter Finals and it’s a great venue here [at Devon],” Passarelli said. “They make it very special and I really like it. The horses really perform well here. I think they know that it’s a big deal and they know they’re coming somewhere special and they rise to the occasion.”

Passarelli trains with the team at Heritage Farm, as well as David Laks and Alex Hamer, and she credits her success to the support of her trainers. Passarelli and Lalique are a fairly new partnership. The pair first competed together just two months ago in May at the Old Salem Spring Horse Show series where they earned the championship tricolor during both weeks of competition.

Of Lalique, Passarelli said, “She tries hard for you and she wants to win. It was kind of an instant partnership. We recently took time off and we went to different shows, but we reconnected the other night here. She really tries hard and it’s really special being able to ride her.”

The Overall Grand Reserve Champion in the 3’3’’ section was awarded to Ella Bostwick (Wellington, Fla.) aboard Bode Well, Melissa Burns’s nine-year-old Zweibrücker gelding out of Aprio. Bostwick trains with Christine Bostwick in Wellington, Fla., and the pair also earned the in the Large Junior Hunter 16-17 3’3’’ section championship, riding to an overall score of 251.70.