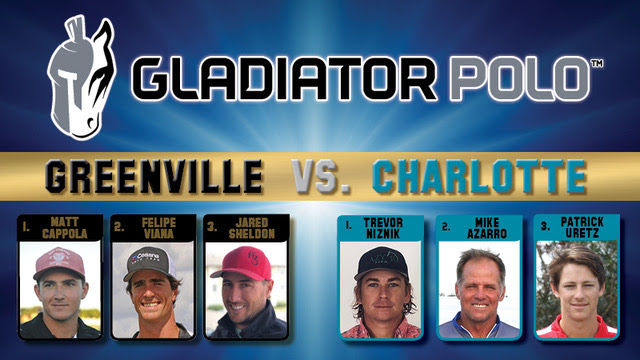 Mill Spring, NC – July 17, 2019 – Tryon International Equestrian Center (TIEC) has announced team rosters for the highly-anticipated August 3 Gladiator Polo™ rematch between Team Greenville and Team Charlotte in Tryon Stadium, inviting fans of the fast-paced sport to pick their teams and cheer them on to victory. Free fun for all ages will kick off at 6pm, including pony rides, carousel rides, magicians and entertainers, face painting, live music, and more. The epic rematch between Team Greenville in black and Team Charlotte in teal will commence at 8pm, but not before a special Ninja Polo™ showcase under the lights.

Returning to Team Greenville to defend last year’s title, Jared Sheldon is joined in 2019 by Matt Cappola and Felipe Viana, combining for an experienced and competitive arena polo team. Sheldon, a Team USPA member, is a 2018 winner of the “Battle for the Carolinas” series at TIEC, as well as the US Arena Open, while Team USPA member Cappola was a finalist in two of three GAUNTLET OF POLO™ Finals at International Polo Club Palm Beach (IPC) in the 2018-2019 season. The trio of Gladiators in black is completed by Team USPA member Viana, winner of the US Arena Open and National Intercollegiate Champion.

Team Charlotte is built to challenge its South Carolina opponent. Team USPA member Patrick Uretz, who holds the “Battle for the Carolinas” title from 2017 and was a two-time National Intercollegiate Champion, heads a formidable Team Charlotte alongside teammates in teal, Mike Azzaro and Trevor Niznik. Azzaro, Polo Hall of Famer, brings his experience as a former 10 goal player and eight-time winner of the US Open, while Niznik is a 2017 finalist of the President’s Cup and a 2018 finalist of the Texas Open.

Fans can enjoy a premier competition dining experience from the Legends Club and Sky Deck, featuring an authentic Argentine Asado buffet and a beer festival with unlimited four-ounce pours of local craft brews. This covered dining experience offers the best seats in the house and is perfect for large groups, couples and families alike. All-inclusive Asado and beer festival tickets are available here. Following the match, don’t miss out on the karaoke after-party at the Silo Bar!

Both teams will collaborate the week prior to the Gladiator Polo™ match as instructors at the first-ever Ninja Polo™Camp at TIEC proudly supported by Polo Training Foundation, which will offer an immersive and hands-on educational experience for kids aged 11-18. Campers will learn from some of the world’s best professional high goal arena players for an experience that can’t be found anywhere else. Coaching staffing is headed by Gates Gridley, United States Certified Polo Instructor and lead instructor at the Polo School at IPC. The camp offers Beginner through Advanced instruction and no polo experience is required, though participants must be able to walk, trot and canter consistently. School horses are available or campers can bring their own mount, and onsite lodging is available. Click here to learn more about Ninja Polo™ Camp at TIEC proudly supported by Polo Training Foundation!

Gladiator Polo™ was inspired by Mark Bellissimo, CEO of International Equestrian Group (IEG) and Managing Partner of Tryon Equestrian Partners (TEP) and Wellington Equestrian Partners (WEP), who understood that the sport of polo was in desperate need of revitalization in order to attract and broaden its traditional audience base. Combining elements of both Field Polo and Arena Polo, the concept of Gladiator Polo™ took form in Wellington, FL, during the annual high goal season in South Florida and from there, the game expanded and has garnered both a national and international following. This is the third season that Gladiator Polo™ has been played at TIEC, where it has become a favorite venue for spectators and players alike. To learn more about Gladiator Polo™, visit www.GladiatorPolo.com.

Tryon International Equestrian Center at Tryon Resort, host of the FEI World Equestrian Games™ Tryon 2018, is one of the world’s ultimate equestrian lifestyle destinations with first-class facilities for all FEI disciplines and showcasing Hunter/Jumper, Equitation, Steeplechase, Polo, and multidiscipline events in Mill Spring, NC. From carousel to competition, the mission of Tryon Resort is to celebrate the magic of the horse, grow equestrian sport, and increase access to this majestic animal. A haven for equestrian competitors and enthusiasts, Tryon Resort is an iconic, year-round destination for connoisseurs of diverse cuisine and shopping, lodging getaways, and family entertainment. Learn more at www.Tryon.com or call 828-863-1000.