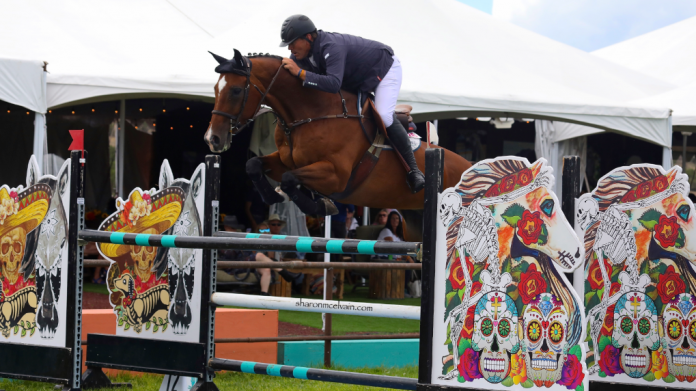 Matt Cyphert and Lochinvar locked in their victory at Sunday’s $30,000 Sonrisa Week Grand Prix at HIPICO Santa Fe! This well-acquainted duo sliced, galloped, and soared around the jumps on the Grand Prix Field, making it clear to the crowds that they entered the class to win. In a field of 30 entries, five proceeded to the jump-off: Natalee Haggan, Mindy Coretz, Matt Cyphert, Allison Kroff, and Grant Seger. Hector Loyola’s course design was technical and twisty, asking complex questions in the beginning and begged for speed in the end.

This is one of many exciting Grand Prix wins for this pair, who has been in partnership for over 10 years. “I got him as a 5-year old and before that, he’d never jumped a jump with a person. He’s been my partner and best friend for a long time now. I know him like I’ve known no other horse. We know each other’s steps and moods, which gives us a special confidence together,” said the head trainer and professional of Woodhill Farm in Argyle, TX.

Matt sensed that his mount wasn’t listening to him well in the first round, but no matter what, Lochinvar is always a fighter and an all-around great horse, “He found a way to be clean in the first round, honestly in spite of me. And then I took a deep breath before the jump-off. We know each other so well in that speed phase, we just did our thing. I’ve said this since he was 7-years old—he understands the sport, he gets what we’re doing and he loves it. He knows when it’s the jump-off, he knows to be sharper, and he knows when he’s gonna go fast… “

Sonrisa Week proved to be a winning one for Woodhill Farm, “We were laughing earlier, because we won the $5,000 National Hunter Derby on Friday, our horse won the $5,000 AOHCJI Jumper Challenge with Michael Tokaruk on Saturday, and then we won this class on Sunday! If we win [Monday’s] golf tournament, we might have to go home! It’s been a great week and having success in both the hunter and jumper arenas is something we’re proud of at our barn!”