Home Blogs Pony Island The FEI Proposes New Rules on Pony Measuring: Why? What are... 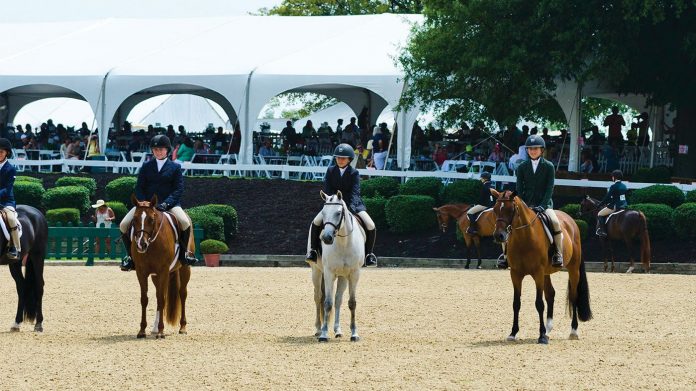 If you are reading this article, you probably know the difference between a pony and a horse and have heard the terms “measuring in” and “measuring out” bandied about. But did you know that the FEI is proposing to dramatically revise the Pony measuring rules? This could have a massive impact on Pony owners, so we recommend you read carefully and raise any concerns you may have with your National Federations or with the FEI directly.

What are the current rules?

Under the current rules, ponies are measured at FEI events handpicked by the FEI Veterinary Department. Two measuring vets assess the ponies at these selected events using FEI certified and calibrated measuring sticks.

If you are a pony owner, the somewhat arbitrary figure of 150cm may strike fear into you because it is currently the maximum height allowed for a pony (without shoes) on competition day. Outside of competition, 148cm (without shoes) is the maximum height. Non-pony-owners might be surprised to know that ponies can ‘grow’ by several centimetres when under competition pressure, due to muscle exertion and sweat. Additionally, measuring conditions at events are not always perfect – there have been some controversial cases over the last few years where the measuring ground surface was found to be uneven, adding phantom centimetres to pony height. This is the reason for the FEI allowing 2cm of leeway as they explain that this compensates for any uncertainty around uneven surfaces

If a pony measures above the 150cm mark, it will not be able to compete that day. But all is not lost; an appeal can be made, leading to an appeal measurement within 40 days. The appeal measurement is done outside of event conditions and your pony has the chance to shrink back down and be called a pony again under FEI rules.

Why does the FEI want to change the rules?

The FEI identified several motivating factors behind the new proposals.

First, the FEI acknowledges the unnecessary stress, particularly for children, caused by measuring at competitions. Pony measuring – and incidental disputes – undoubtedly increase an already pressured environment. Pony measuring stress is not limited to children; it also draws in their parents and trainers. Nobody wants to travel hours to a competition, only to be told to turn around and go home again. And for those of us who are parents, we all know that there is nothing that induces stress more than the possibility of deeply disappointing our children. This makes for an explosive combination when pony measuring at events goes badly.

Additionally, the FEI believes that the 150cm limit allows ponies that are too large to compete – they think this current upper measurement is too high and needs to be curtailed.

The FEI also has efficiency on its mind. They want to eradicate the appeals system, which they believe wastes time and money. They are concerned about cases where a pony exceeded the maximum height (or ‘measured out’) at competition, then has a successful appeal measurement within 40 days… and then goes on to measure out at an event later that year. The FEI thinks the new proposals will prevent that from happening and therefore level the playing field for true ponies.

So… what are the new proposals?

The FEI is proposing doing away with pony measuring at competitions and instead implementing a system of global measuring sessions, undertaken yearly in each country or region. The maximum height would be reduced from 150cm without shoes to 148cm without shoes (149cm with shoes).

The FEI has suggested that the measuring sessions could take place between January 1 and March 15 each year, with an option for other sessions after this period. The sessions will take place at set measuring stations, with the FEI aiming to place at least one in each European country. The FEI proposes a complete revamp of the measuring stations under the new system. To ensure the stations are fair and consistent, the FEI has stated that there must be a flat measuring pad for ponies to stand on, an area to walk the ponies in hand, an area for ponies to urinate and finally an area for lunging and riding. There will be a measurement fee, which has not yet been set, charged for each pony.

The actual method used to measure the ponies may also evolve, as the FEI looks to increase efficiency and accuracy. The FEI is looking into using a recently developed laser device that works by sending a laser beam to the ground once placed on top of a pony. High tech!

Ponies will need to be measured every year, until they reach eight years old. Once a pony reaches eight, the FEI will issue a lifetime certificate.

How will these proposals affect you? Should you be concerned?

If the new pony measurement proposals are accepted by National Federations, the transition period in which newly registered ponies would go through the new system, would begin on January 1, 2020 and end on January 1, 2023. During this period the FEI would carry out measuring only at three events: the European Pony Championships, the Nations Cup Final, and the Pony Trophy Final.

If your pony is already registered with the FEI, you do not need to worry about getting a certificate until January 1, 2023. That said, if your pony ‘measures out’ during the transition period, you will have no right to appeal and your pony must then register under the new system. Your National Federation will be notified and your pony will be blocked and will need to be re-registered as a horse. Any attempt to have the horse return back to pony status can only be made once in the same year and after that, once a year for two years.

Lisa Lazarus is former FEI General Counsel and Head of Equestrian Services at Morgan Sports Law which represents athletes. She can be reached at lisa.lazarus@morgansl.com. For the USEF’s response, click here.

Living the Dream at Pony Finals