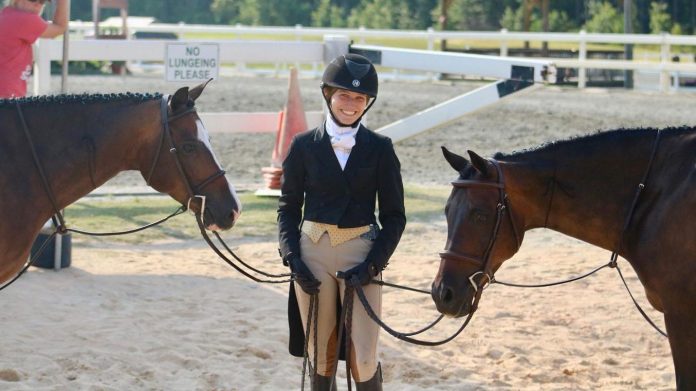 Years and years ago, when I still read my PonyKid a book every night in bed, we read about a girl and her trip to Pony Finals. That book has been read dozens of times since then. The spine is cracked, the pages are frayed and dog-eared. It’s been loaned out and brought back. She knows the words by heart. My kid was smitten, a goal was born—one day she must make it to the Walnut Ring that magical week in August.

As it often does, “one day” seemed so far away… until it wasn’t.

The upshot to my short little legs is that I never outgrew the ponies. I still fit and prefer them. The child, on the other hand, has legs for days. It became clear that her pony days were numbered and, if the goal of going to Pony Finals was to be realized, we were going to need to get on that sooner rather than later. The road to get there hasn’t gone exactly the way I envisioned it, but come the first week of August, we will be at the Kentucky Horse Park and the PonyKid will get her trip around the Walnut Ring!

Horses and ponies, in general, do an excellent job of keeping us humble. The process of getting to Pony Finals was no different. From the realization that it was not in her pony’s best interest to do the large greens and life changes that lead to budget changes, there were so many times that it looked like we were going to have to change the goal. Maybe my PonyKid was just not destined for Pony Finals. However, ponies are excellent at teaching tenacity. My PonyKid wouldn’t give up her goal without a fight.

One of the lessons I hope to instill in my children is that sometimes life is tough. The cards are stacked against you. Sometimes the roadmap changes, but that doesn’t mean the destination has to change. When life throws us a curveball, we don’t quit. We may change direction, but we don’t change the goal. The goal was to show at Pony Finals 2019, and thanks to some hard work, some good people, and a little luck, we will do just that.

When I was a kid, Pony Finals was definitely a thing, but I don’t ever remember wanting to go. Maybe it’s because I (and my aforementioned short legs) was the only one of my friends still on a pony, long after everyone else had moved on to horses. Maybe this is one of the areas where technology and social media have worked to grow our sport in a good way. Live streaming and shared pictures puts big horse shows in our living room, and creates some serious #FOMO!  When my PonyKid decided she had to go, I am not going to lie—I was pretty excited myself. It sounded like a Disney World for pony kids complete with shopping, mom massages, and ponies as far as the eye can see.

After the PonyKid dug deep with her own green pony and showed us she was willing to work hard to do what it took, her trainer and I agreed to try and find her a pony to lease just for Pony Finals. So began the quest to find a pony who was already qualified, the right size, close enough that she could go try him, and safe enough to keep my PonyMomAmmy nerves in check. We were very lucky to connect with a family in a neighboring state that had a qualified pony who rides very much like her current one and were willing to let us lease him for the month leading up to Pony Finals as well.

Sometimes I wonder if I am cheating her a bit by not having her go through the process of qualifying the pony herself. Would she appreciate it more if she had put in more of the leg work to get there? Then I remind myself that she is putting in the work. In fact, she’s doing it crash-course style. She’s taking a lesson every single day for five weeks, and figuring out how to push his buttons in days instead of months. PonyKid is cramming in six months of hard work into five weeks, and she’s doing it with a smile because she wants it that much.

By sacrificing to help her reach her goal, I am emphasizing the very best quality that horses can teach us—if you want it enough and put in the effort, you can achieve anything you set your mind to. There will be a million times in life when the odds will be stacked against her, and giving up will seem like the smart decision. But I would be cheating her if I let her believe that giving up was an option.

To add to my own excitement, the show is turning into a pony lover’s reunion. My childhood trainer is bringing a couple of her current pony kids, and we’re spending a few days with them prior for the kids to get to know each other. We’re all stabling together, neighboring in the RV park (y’all—send wine and reinforcements… I have a feeling we might be getting a little unhinged by Thursday night). While this week is about the kids and the ponies, selfishly I’m excited to have my PonyKid, our current trainer, my childhood trainer, plus friends (and ponies!) all together for a week.

While we will spend a full week at the horse park, only two of those days will be spent in the show ring. Of course there will be daily rides, but I cannot wait for the PonyKid to take part in the clinics, listen to others’ perspectives, and spend time with so many other like-minded kids. While we are making sacrifices as a family to get her there, she had to sacrifice her beloved month at summer camp in exchange for a week in Kentucky. This week is her summer camp (only without revelry and taps and swimming in an ice-cold lake), and she will make a lifetime of memories. I might be happier in a posh hotel, but it makes me smile to imagine an RV park full of fellow PonyKids and PonyMoms (dare I hope for a few fellow PonyMomAmmys) who are all as hopeful as I feel.

So often at the big shows, the main event is the Grand Prix or the International Derby. The pony kids are generally exiled to the far ring where the smallest competitors draw the least attention. How great is it that we give them an entire show where they are the main event? The only event. As her mom, PonyKid is always the star of my show, but this week these kids get to be stars to everyone. They all get a trip around the Walnut Ring (honestly I’m a little jealous of that bit) and the chance to be in the spotlight.

Just getting the chance to show at Pony Finals is a huge accomplishment. She is already working out how she can make her way back for 2020, and in that regard, she’s already learned the most important lessons of all—when it comes to dreams, they should be so big that they scare you a little.

Never let doubt keep you from trying your best, and even when it seems like hope is lost, dig a little deeper. Find 30 seconds of insane courage. If she can take that away from this adventure, it is all worth the effort to get her there.

Living the Dream at Pony Finals