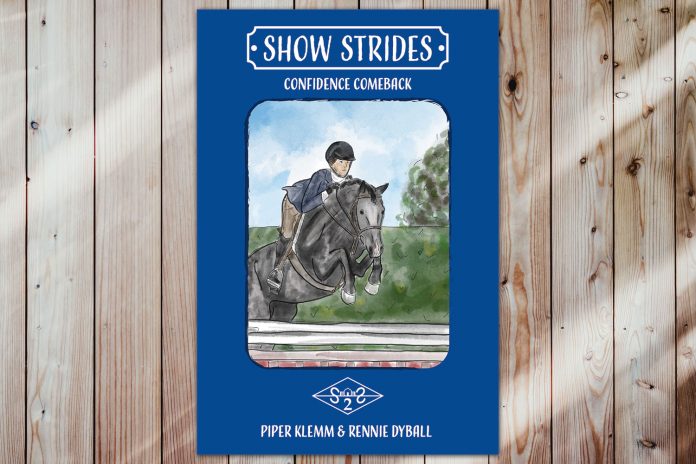 We hope you are enjoying book 1 of The Plaid Horse’s new novel series, Show Strides. To celebrate Pony Finals – and summertime reading – we are happy to share this excerpt of book 2 below. Show Strides books 1 and 2 are available on Amazon (paperback, Kindle and Audible), and at select tack stores.

“Oh my gosh, Goose, you are gorgeous!” Tally whispered. The pony perked his ears and took a couple of tentative steps toward her. He was a dark dapple gray—gray horses and ponies got lighter in color as they aged; Goose was obviously quite young, with a neatly pulled, silvery mane and the most adorable dished face. He had a pink muzzle and looked cozy in his plaid blanket. Meeting him reminded Tally of opening model horses on Christmas morning and marveling over just how perfect they looked. And here she was, in the stall of a pony just like that. Only this one was real.

She quickly noticed just how curious he was. Maybe it was his age, or the fact that she was a new person to him, but he took great interest in everything from the soft brush she ran across his neck, to her coat when she bent over to pick out his feet. At first, she jumped when he placed his head on the small of her back—a flinch that came from years of grooming certain schoolies who’d try to nip you when you weren’t looking. Goose looked mildly offended when Tally flinched, so she rubbed his neck and told him it was okay. When she picked out the other front hoof, Goose tentatively placed his chin on her back again and Tally giggled quietly. She finished getting the pony ready, the two of them quietly enjoying each other’s company.

Tally walked Goose up to the path toward the large indoor, and the pony moved slowly beside her. He was calm, but he took his time checking things out, like a stray lead rope left in the grass, as they made their way up the hill. He also paused to greet one of the full-time grooms who was walking down the hill toward the barn.

Ten minutes later, Tally had walked Goose one lap around the ring on a loose rein, and then once more, picking up some contact with his mouth. Ryan told her to trot the pony around, do some circles, and generally just let him see the ring.

Tally picked up the trot and was immediately taken aback by what the pony felt like underneath her. It was not at all what she expected out of a small pony, more than two hands shorter than the mare she was used to riding.

“What do you think?” Ryan asked. “He’s pretty special, huh?”

Ryan chuckled. “Yeah, he covers a lot of ground. Tons of stride. He measures 12.2 so he’s technically a small, but he’s really big-bodied, so he probably rides a lot bigger than he actually is. Keep circling and bending him and let him see the ring. Oh, and don’t get any taller, okay? You just barely fit on this one.”

Tally smiled and kept trotting around on Goose. Though she had hacked Danny at least a dozen times, the concept of flatting a pony herself – without the usual instruction and direction of a lesson – was still a fairly novel one. She felt so special making circles around the jumps and guiding this fancy little newcomer while Ryan taught another student.

After another couple of flat rides on Goose by herself, Tally had her first lesson on the pony scheduled for Friday afternoon. She was so excited to jump him. While she recognized the feeling of a big, rocking stride from riding Danny, it was somehow different on Goose. The way he covered the ground just sort of… happened. It felt like he was just skipping along, without a care in the world.

“That’s what you want in a pony who will do the division one day,” Isabelle had told her when they were in the tack room together. “That ground-covering stride feels good to ride, doesn’t it?” Tally agreed with her, feeling very lucky to help bring the pony along.

Once Tally finished flatting in her first lesson on Goose, Ryan adjusted a line and told her to trot in and canter out in five strides.

Tally was surprised, and as usual, the emotion showed on her face.

“Totally,” she quickly answered. “I just thought we’d be starting with little cavaletti or something.”

“Always a method to my madness,” Ryan told her with a wink. “Just keep your leg on to the base, and then when you land, sit chilly, focus on keeping him straight. If you get five strides, six strides, I don’t really care. I want straightness and a consistent canter. Let’s see what we got.”

Tally picked up her trot and concentrated on keeping G between her leg and hand before turning him toward the first jump of the line, a small cross-rail.

“Keep your eye up, Tal, aim for the middle.”

Tally did as Ryan instructed and G popped up over the fence, cute as can be. He landed cantering slightly to the left. Tally pulled on the right rein to correct him and he skewed a little too far right. She finally got him straight one stride before the vertical and he gave it a nice, lofty effort.

“Not bad, but you need to steer him with your legs a lot more if he’s wiggly down the line. Your hand isn’t going to fix that; this needs to come from behind. Do it again.”

The next time, Tally jumped in and corrected G’s wiggles with her leg signals – she was pleasantly surprised to see that she didn’t need to use the reins much, if at all – and he stayed straighter this time trotting in and cantering out in the five.

“Much better! Now do the same thing and then turn left and come up over this little vertical,” Ryan said, lowering the single jump on the diagonal. G navigated the five-stride line even better this time, with Tally having to do less to keep him straight. They cantered through the turn, and once he got his eye on the diagonal single he surged forward a little – they met the fence too close, G popping over it in an uncomfortable chip.

“You rode that whole thing great until three or four strides out from the last jump,” Ryan said as Tally slowed the pony to a walk. “He changed the pace on you and went past the distance, which is why you chipped. Try it again and just settle him softly and quietly with your hand while still supporting him with your leg.”

G breezed through the outside line again, as if some of his greenness had evaporated over just a few efforts. Tally kept him straight and balanced away from the jump and through the turn. When he picked up the pace again on his way to the single vertical, she squeezed her fingers around the reins and sat tall, keeping both legs lightly on his sides. The pony slowed down just enough that, after a couple more balanced strides, they met the vertical much better.

“Good, Tal, that’s the ride! You’ve got such a nice feel, and I think this guy knows his job pretty well already. Go ahead and quit with that, tell him he’s a good boy.”

Keep reading! Show Strides book two is now available in paperback, on Kindle, and on Audible. Get your copy today.

We want to hear from you: Share your thoughts on Show Strides by writing to showstrides@theplaidhorse.com, and leave us a review on Amazon!