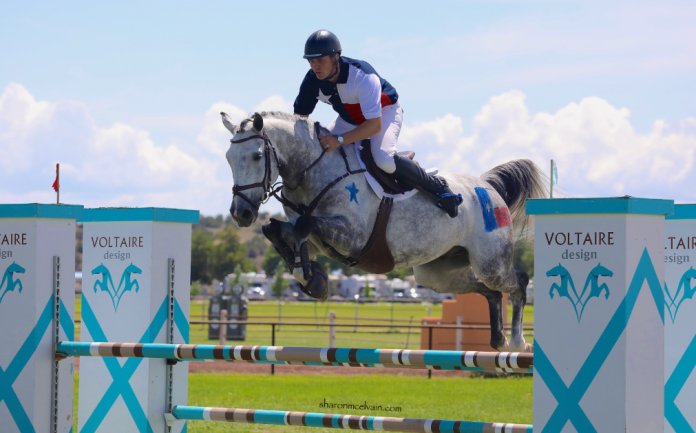 The Battle of the Flags is perhaps the most ruthless and simultaneously hilarious competition of them all! Saturday afternoon marked the 2nd annual Battle of the Flags class, which was introduced last year after some enthusiastic riders decided they wanted to fight for their state’s honor by riding to win the right to fly their emblem at the top of our Grand Prix field’s centerline until the next Summer Series.

At the end of the day, Frankie Owen’s ball cap said it all, “Don’t Mess with Texas!” After Christian Heineking’s impressively fast jump-off with a gallop that made everyone’s hair fly as he passed by, the victory was sealed for Team Texas! Jensen was a touch slower, with a clear round, and O’Neal snagged a rail in his jump-off. A champagne shower christened Team Texas’ win atop HIPICO Santa Fe’s signature turquoise and orange winners podium. The teams’ special outfits, purchased for the competition– Colorado’s colorful tie-dye t-shirts, New Mexico’s button ups and bolo ties, and Texas’ state flag polos—were doused repeatedly in bubbly. Each time a competitor got their hands on a champagne bottle, they sprayed it at their rival state friends, demonstrating the epitome of ‘friendly rivalry.’

“Besides a few pranks, it was all good-natured fun. That’s what started this competition… the friendly rivalry between NM, CO, and TX. This class showcases that we’re all friends, but we love giving each other a hard time. We have a lot of pride in our state! Especially as Texans, it meant a lot to us to win. We were close last year and just missed it—we had something to prove this year,” said Matt Cyphert, one of creators of this class.

Team Texas was thrilled to win the competition and raised their flag together to the top of the flagpole, after ‘talking some smack’ to the other teams. When asked how they felt about their victory, they just screamed! “Our Chef led us to a great victory!” said Erin Davis-Heineking, who was a last minute addition to the Texas team. Frankie Owens said, “This is a proud moment,” as he clutched his heart jokingly. The winners then suggested that they should start a 1.20M trailing Nations Cup Team! At the end of the day, despite the pranks and playful feuding, the event benefitted the community. Before the competition, state flags were sold in the VIP Lounge and HIPI Hangout by donation. The proceeds raised by the flag sales will benefit the CHRISTUS St. Vincent Regional Medical Center in Santa Fe.

The parade of the teams sported some wild presentations! Team New Mexico arrived to the course walk in style—with team members perched in a bright red Sandia Auto Group MINI Cooper convertible accompanied by a New Mexican-themed song. Each time they scored a point, an enthusiastic spectator in a feathered Roadrunner (the New Mexico state bird) costume would run through the crowds and dance! The adorable Ella Heineking painted her pony, Quanah, in Texas state colors, drawing many ‘awwwhs’ and smiles from the audience. Amanda Tallman served as the team mascot for Colorado, sporting a ‘superhero’ image, with a flag that doubled as a cape, “I’m a hunter rider by day, superhero by afternoon!” laughed Tallman.

A special thanks to our Show Manager, John McQueen, for crafting this class, to the competitors whose friendly rivalry led to the creation of this class last year, to the Abiquiu Inn for gifting a one-night, all-inclusive getaway to each of the winning team members, and to those who purchased flags in support of the charitable donation to CHRISTUS St. Vincent Hospital.