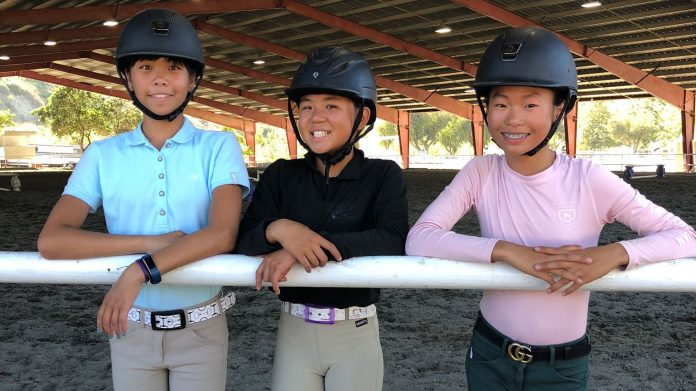 Lucy, Macy, and Lily are three young riders who all ride for the San Juan Capistrano, California based Bridges Equestrian Interscholastic Equestrian Association (IEA) Middle School Team.  All three of these girls were born in remote parts of China to families who, due to the one-child policy, could not keep them, but were determined to give their daughters a better life.  Each was placed into an orphanage where they were loved and cared for until they were matched with adoptive families. These girls share a common background, and now ride together as teammates with their shared love of horses and competitive focus. Lily’s mom, Cathy notes, “On a team of twenty riders to have three that share this common history defies the odds.”

There is a Chinese proverb that states, “An invisible read thread connects those destined to meet, regardless of time, place, or circumstances. The thread may stretch or tangle, but never break.” Adoptive families believe that this red thread connects a family to their child well before the official “match” day, but the idea also extends to other people that are destined to meet and interact throughout their lives, including friends. The thread that binds these three friends also wraps around the horses that they ride and the barn where they enjoy spending their time.

Lucy Anne Ai Donchess was born on May 13, 2006 in Zhaoqing City in the Guangdong Province. Her orphanage named her Zhao Si Ai when she was delivered there at four days old.  On a day known as “Family Day” in adoption, Lucy met her parents, Jamie and Chuck, on July 7, 2007. “Ai” remains in her name today to celebrate her Chinese heritage. Si Ai means “longing for love,” and Lucy has most definitely found that love as she now enjoys three older siblings, one niece, and four nephews.  A true competitor, Lucy rides and competes with Bridges Training Stable.  In addition to her equestrian passion, she shares a love of golf with her father and together they participate in local tournaments.

Lucy shared, “I am really looking forward to next season because last year everyone was so kind and I loved riding so many different horses. IEA means I get to spend time with my friends and do what we love.”  Lucy earned the opportunity to represent her Bridges IEA team and Region 1 at the Zone 10 Finals in class 12 individual Future Beginner on the Flat. For their first year as a team, Lucy and her teammates were thrilled to have made it onto Zones.

Macy Bo McClellan, named Bo Qing by her orphanage, was born on August 9, 2007 in Nanchang, Jiangxi. When Macy’s parents met the woman who had cared for her in the orphanage, they were told she was a joyful baby. Macy, her older twin sisters, and their mother all ride horses. Her family’s backyard is a favorite place for her teammates to visit because of their mini donkeys, goats, dogs, chickens, and retired horse. Considering the upcoming IEA season, Macy shared, “This is my first year with the Bridges IEA Team and I already feel like this is where I belong. I have improved as a rider and as a person.  I love to spend time with the horses, my new teammates, and their families.  I can’t wait for what’s ahead.”

Lillian Grace XiaoNan Muzzy, named Yong Xiao Nan by her orphanage, was born on October 7, 2006 in a small farming village near DaoXian in the Hunan Province.  According to the “found ad” that was placed in a local Hunan newspaper, she was found by “Citizen Wu” on the morning of October 8th, clothed and wrapped in a blanket and placed in a small cradle-like box on the steps of the Health and Human Services Building just moments before they opened for the day. Lily was immediately taken to the local orphanage where she stayed until July 3, 2007 when she was officially adopted into her family.  Lily is the youngest of three children, and is well-loved by her older brother and sister and cousins.

Lily started riding with Bridges Equestrian as a summer camper when she was 10-years-old. In April 2019 she represented the Bridges IEA Team and Zone 10 at the IEA Hunt Seat Nationals in Harrisburg, PA where she earned the title of Champion for the class 12 individual Future Beginner on the Flat. Lily stated, “Our IEA shows are more than just a competition. We love riding the different horses, and we enjoy spending time together as a team, watching other riders, polishing each other’s boots, playing games, making video edits, and cheering for our teammates.”

She leases two ponies and is in full-time training with Bridges Training Stable, and will be riding in her first USEF Pony Finals this August aboard a small hunter pony.  She also looks forward to her second year of IEA competition with her team.

Whether it’s the red thread, luck, or simply a love of horses that has brought these three girls together, they’re thriving under the support of their loving parents and the life lessons built in the barn.

Dr. Catherine Muzzy is a mother of three and a retired elementary school principal who happily spends her free-time cheering for the Bridges Training Team and consoling her husband about the time and money they spend on horses.