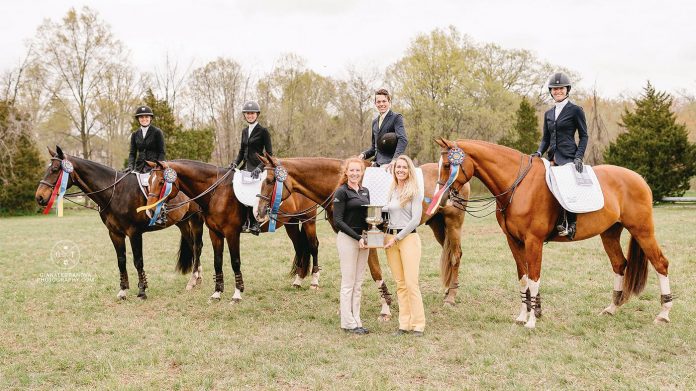 BY ASHLEY HENRY, Equestrian Head Coach, The Savannah College of Art and Design

Building a championship team is truly a creative endeavor.  Next year will be my fifteenth year coaching the SCAD equestrian team. Our reputation as a top collegiate team is irrefutable, though as I emphasize to our team, that’s not a laurel to rest upon. The origin of SCAD equestrian excellence goes back to my time—not really that long ago—as an undergraduate student. I attended SCAD as a jewelry design major, at the same time competing as a member of the equestrian team. I was, unforgettably, a member of the SCAD 2003 and 2005 American National Riding Commission Championship teams. As a SCAD student-athlete, I found that I could combine the two most significant passions in my life in one setting. When I graduated, I considered pursuing a professional path as a jewelry designer. However, when the opportunity arose to become the SCAD equestrian coach, I embraced it wholeheartedly.  I understood that this, too, would be a rewarding creative career.

As the equestrian coach, SCAD provides me with the opportunity to develop an equestrian team with a creative mindset. That vision comes right from the top. SCAD president and founder Paula Wallace epitomizes the creative mindset and the work ethic necessary to make dreams come true. She wants students to succeed and provides the faculty and facilities to make it possible. From there, it’s up to us to put in the work.

When I was a SCAD student, we had about 20 horses and 20 students on the equestrian team. There are now 65 students on the team and 70 horses at the facility. That sort of exponential growth has only been possible because SCAD equestrian is not just a team, it’s a lifestyle. As a top college equestrian team in the country, we utilize the unparalleled resources at the Ronald C. Waranach Equestrian Center and create an environment that gives students the opportunity to achieve.

As we prepare for what we believe will be another championship season, we are also helping students cross the bridge to their creative careers.

I tell the team that etiquette in the show world translates into etiquette in the professional world. We have social media seminars that help students properly present themselves online. We work with a mental skills coach to teach mindfulness and work with a personal trainer and yoga instructor. SCAD equestrian artist-athletes are always involved in serving the local community. Ours is a holistic approach to developing champions.

I tell my team that as athletes, you have to have a passion to push yourselves to be better. Artists have that same passion: to show the world their talents and to express themselves in everything they do. As a former SCAD student artist-athlete, I know that being an artist and being an athlete go hand in hand.

In addition to those accolades, I am immensely proud that an incredible nineteen SCAD artist-athletes were named to the 2019 IHSA All-Academic first and second-teams. These achievements speak directly to inextricable emphasis on academic excellence. By preparing and developing a winning mentality, we develop skills that translate into the professional world.

We are the first art and design university in the U.S. to offer a comprehensive intercollegiate equestrian environment. In addition to our national championship winning competitive equestrian team, SCAD Savannah offers a B.A. degree in equestrian studies and an equestrian studies minor. This unique program fosters connections among our students and graduates. Today alone I had six alumni from our team reach out to check in – SCAD is a family, a real community.

SCAD equestrian has the benefit of learning, practicing and competing at the 180-acre Ronald C. Waranch Equestrian Center, located just over the bridge from downtown Savannah in Hardeeville, South Carolina, constructed expressly for the SCAD equestrian program. The facility providing ideal conditions for the riders and horses, including two full barns, a derby field, a covered arena, three competition arenas, an on-staff vet with industry-grade equipment. Its preeminence reflects the sustained success of their team.

I invite you to learn more about SCAD equestrian and visit the Ronald C. Waranch Equestrian Center, www.scadathletics.com and www.scad.edu/equestrian.

Working in a Winter Wonderland: A Day in the Life of a Norwegian Equestrian