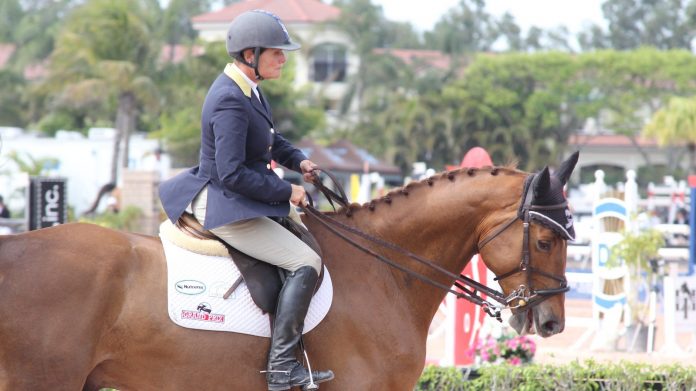 Leslie Burr Howard is a two-time Olympic medalist, winner of the FEI World Cup Finals, Rider of the Year, and American Horse Show Association’s Equestrian of the Year. But she began like so many of us: just a kid who wanted a pony.

At four years old, Leslie wanted a pony. Horses were not a family passion, in fact her parents were involved in theatre. Leslie was not sure why she wanted a pony…she just knew that she did. Her letter to her mother asking for a pony can still be seen, displayed in the Show Jumping Hall of Fame and Museum.

She got one, complete with a western saddle. The love of speed that Leslie has always exhibited manifested itself immediately. She wanted to go fast, and faster. Racing around a track in her yard, she would time herself. Then she would do it again, always aiming to shave seconds off of her previous record. When she outgrew that pony, she got a new, more talented one. She named it Topper. The next pony was named Topper, too, as was the one after him.

Leslie made three things perfectly clear from the very beginning: she loved speed, loved a challenge…and was fearless. When she turned six, her parents decided it was time for formal lessons, and took her to Highfields Farm, a top pony farm just a mile down the road, where she began riding with Sharon Hardy Cole and her brother Thom Hardy, who rode for the USET. Highfields bred some of the top ponies of the day.

Leslie thrived on the top-flight schooling she received. “I really lucked out by having that available to me. I got to ride a lot of great ponies.”

The Hardys were also remarkable in their selfless dedication to Leslie’s success. When Leslie needed to move on to a top trainer, she selflessly sent her forward. Leslie cannot thank her enough for her decision to let go and send her onwards. “She’s a wonderful person!”

Leslie won the Maclay Finals in 1972 at the age of 15, the second youngest only to her teacher, who took the title at 14. Competing at Madison Square Garden and winning the finals was, says Leslie, “every kid’s dream.” She was thrilled, and a bit surprised. “It was the finals. I was pretty young and I wasn’t expected to win it.”

Although the Finals have moved several times, from the Garden to the Meadowlands and back, and now in Kentucky, Leslie declares “They never lose their prestige.”

Leslie’s years of competing in equitation, hunters, and jumpers as a junior, along with her reputation for fearless riding, served her in good stead as she began her professional career.

Leslie no longer competes in the hunters, and when asked why, she replied, “They go too slow these days.”

Anyone watching her compete cannot help but notice the way she attacks a course, unafraid to tackle a difficult option or attempt something no one else has thought to try. When asked what makes her so fearless, Leslie replied: “I think it is normal for anyone to get scared. This is however something you should be able to mentally overcome. For me it always came down to choices. I can let my fear dominate and have a poor performance and lose or I can focus, put fear aside and win!”

Riding a “very scopey and brave” Thoroughbred named Albany, owned by her student Debbie Dolan, Leslie won the American Grand Prix Association Rider of the Year in 1983. Albany took the Horse of the Year title the same year, and repeated it the following year. The Dolans graciously loaned Albany to Leslie to ride in the Olympic trials to try to qualify for the 1984 Olympics. They did qualify, and their winning streak continued at the Olympics, where they took the team gold medal in Show Jumping.

Albany had tremendous success with his owner Debbie Dolan as well. To Leslie, that ability to be successful under different riders is the mark of a great horse. Gem Twist, another of her rides, shared that ability as well. Gem Twist won two Olympic Silver Medals in Seoul, South Korea, with rider Greg Best.

When Best was injured in 1992, Leslie took over. A Thoroughbred like Albany, Gem Twist “was a great horse, always a winner with different riders. He was a very dynamic horse, with a big, big gallop and a really dynamic jump. He was a real crowd pleaser.”

Gem Twist took the Horse of the Year title in 1992, and he and Leslie took first place in the USET Show Jumping Championships in Gladstone, New Jersey…in a tie with Charisma, also ridden by Leslie. Gem Twist won top placings with Laura Chapot in the irons as well.

Leslie won team Olympic Silver in Atlanta riding Jane Clark’s Extreme in 1996. This time, “I appreciated it much more; I realized how much it took to win the medal.”

The horse that Leslie enjoyed competing the most was S’blieft, with whom she won the richest Grand Prix in the world, at Spruce Meadows (Calgary, Canada). At that time it was worth $750,000. But it wasn’t just the thrill of victory that made S’blieft special. His personality was “more like a dog than a horse. He would follow you around the ring, bite and pull your pony tail or your hat. If you were riding in a field you would suddenly find yourself on the ground when he decided it was time to graze.”

At the Winter Equestrian Festival, Leslie rode Youp to win both the WEF Qualifier (for the Grand Prix) and the Grand Prix in the same week, the first ever to do so. In 2016, she won at the Toronto Royal on Donna Speciale, followed by two wins at Calgary with the horse. Currently she campaigns Donna and Quadam, both owned by Laure Sudreau, on the circuit. Quadam recently won the Old Salem Grand Prix.

After competing exclusively from Fairfield County Hunt Club since 1978, Leslie moved about 10 years ago to base her Burr Associates Inc. business at Redgate Farm in Newtown, CT, “It has every type of obstacle imaginable,” she states, “different types of banks and ditches, liverpools, water jumps, and grobs.”

Leslie’s professional career began riding Thoroughbreds; now her mounts are predominantly warmbloods. “There are very few Thoroughbreds competing in Grand Prix now,” she states. “But every warmblood competing at that level has Thoroughbred in it; it’s just a matter of degree.” Leslie finds that the advantages of a Thoroughbred are they are “very light, quick, and hot.” But they are “not terribly strong in the back and hind end,” while warmbloods possess more strength and substance in these areas.

Thus today’s warmbloods, with their high percentage of “blood” represent the best of both worlds.

From a western pony to Olympic gold, and countless accolades along the way, Leslie Burr Howard has always been a force to reckon with in the show jumping world…and always, fearless.