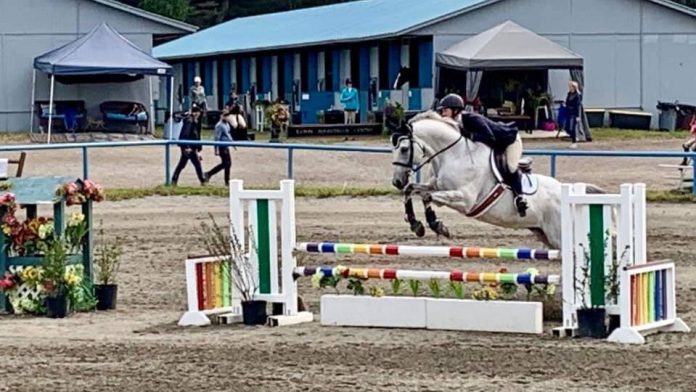 All horse owners have gotten “the call.” The one that tells us something is wrong. The one that sends us spinning.

On May 22, I got that call. My barn owner explained the fence between my horse, Wyatt, and his neighbor was out of place, and that Wyatt’s front legs were cut up and bloody. Things looked superficial, but I headed straight out to check on him.

Wyatt is a “sweller,” as I like to call him. The tiniest cut will give him a tree trunk of a leg, so I wanted to get him wrapped. When rinsing off all the blood to do so, I uncovered the wound below and found that what had appeared superficial was a few deep lacerations. One along the side his cannon that would later create quite a mess when they began to clean and stitch it, and another large flap on his fetlock just missing a major blood vessel, as well as the branch of his suspensory.

One of the challenges of living in Alaska is that our access to vets is limited. While we have a handful of incredible vets to choose from, they often are full with clients and busy seeing all sorts of animals—not just horses. Unfortunately for us, Wyatt’s regular vet was out of town. So, I called the Alaska Equine and Small Animal Hospital, located about an hour from the barn. While their day was too jam packed to come to us, they were able to see Wyatt if we could drive to their clinic.

This is where my barn family began to rally. I do not have a trailer in Alaska and my husband had taken our truck in to work. Without hesitation (actually while I was still on the phone making arrangements) the amazing couple, Ken and Bobbi Outten, who own the barn where Wyatt is boarded, sprang into action. They insisted Wyatt was now the top priority of the day, and off we went to the vet. Once there, Ken helped me unload, and stayed with Wyatt and I the whole time. He held him while I talked to the vet and took pictures when I was too upset to look at the wound.

Meanwhile back at the barn, Bobbi called out of work. She completely disinfected and moved Wyatt’s things to a new stall, away from his neighbor. She got him set up with fresh bedding and hay and went through every inch of his new stall and run to ensure he would be safe.

No one knows exactly how Wyatt got hurt. If he was cast, or if his neighbor finally got tired of his overly friendly personality and took down the fence to kick him (she doesn’t have a mark on her). But Bobbi and Ken worked to ensure he would be as safe as possible when he got home. Since Wyatt and I arrived, they have always gone above and beyond to ensure we are safe and happy.

I am thankful to report that three and a half weeks after the injury, Wyatt was able to start back to work. And at four and a half weeks, he returned to turnout with his buddies (managing to remove both his bell boots and a shoe). We are now about two months since his injury occurred and are back to full work, even jumping, and Wyatt feels fantastic.

My college coach, Dirk Fogg, used to tell us “Horsemanship, sportsmanship, forward and fun.” While it was far from a fun day, I was truly amazed and grateful to the kindness Wyatt and I were shown. Without the horse, our sport wouldn’t exist. I feel that good horsemanship is putting the horse first, everyday. And that is exactly what the Outtens did for him, and always do for every horse.

While I wouldn’t wish this scary day on anyone, I am so grateful for everyone that helped me to take care of Wyatt. Horsemanship for the win.

The Bloodline Factor When Assessing a Jumper