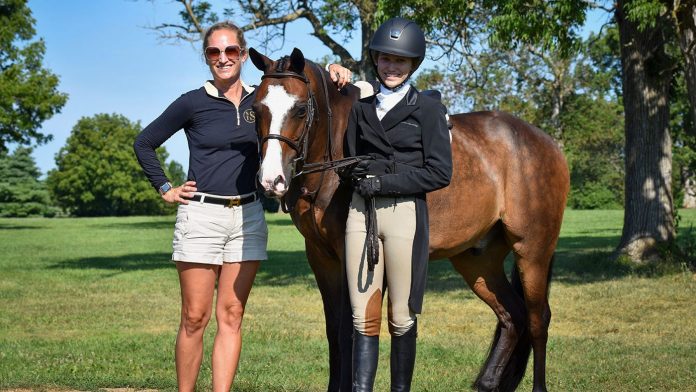 We survived Pony Finals! I feel like there should be some recognition for us moms that helped groom, and clean stalls, and wash breeches in the laundry mat at the RV park at 11:00 pm (though maybe that was just me). If every kid receives an exhibitors ribbon, surely the moms do too. After all, we dried tears of joy and/or disappointment (sometimes for ourselves), and made sure the kid ate something beside snow cones.

With PonyKid not showing until Friday and so much fun outside of the ring, it felt more like we were on vacation with the pony instead of at a horse show. The horseless horseshow, benefitting the USHJA Foundation, was hysterical and so fun for the kids. They ran a cross rails, short stirrup, children’s hunter, junior hunter division and a puissance! The best part were the flat classes where they had the kids do a sitting trot, counter canter, halt—all sans ponies. It was an absolute hoot!

The golf cart parade was more spectacular than I could have imagined. Even with our Danny and Ron’s Rescue Bus, we were small potatoes in the Alltech that night… not that the kids cared one bit. They enjoyed building and painting the bus as much as anything, and it was a great opportunity to do something together as a group where the whole purpose was to have fun.

Of course the real reason for being there was the actual horse show. I think within an hour of arriving at the horse park (the pony had made the trek the day before, so was well settled in) she was on the pony and in the infamous walnut ring. Kid and pony were completely unfazed. Meanwhile, I was in total awe of the sheer size and grandeur of the ring.

My PonyKid rode everyday to finesse on a few things since she had only known her pony for a few weeks. She had never even attempted a two-stride on him until her first ticketed warm up at the horse park (nailed it!). There were long walks on the cross country course, daily hacks and ticketed warm-ups. We were one of the few groups without a groom, so add in lots of pony cleaning, and stall cleaning, and tack cleaning too.

My favorite time (aside from when PonyKid actually showed) was going to the barn in the cool evening air night check. It gave my overloaded mom brain a chance to reconnect with the pony and take a breath. I tried to reiterate over and over that the sole purpose of being at Pony Finals was for the experience. The goal was to go in and do her best with what she had to work with at that moment. The goal was never to win, but that’s easier said than done. I know deep down, the kid (and me) had hopes of walking away with beautiful ribbons.

When Friday finally came around, we were ready for the model. It was not something PonyKid had done before, so she had been practicing for weeks. They exceeded my expectations and truly held their own in a sea of really lovely ponies. All that hard work paid off as I watched my kid handle the process with poise and professionalism.

The under saddle crept up quickly, and before I knew it she was back in for the hack. One of our people had told PonyKid that they thought the pony could ribbon in the hack, and despite all my reminders about “experience over ribbons” I knew we all had our hopes set on that happening. It made what happened next all the more difficult. On the second direction, the pony got distracted from everything happening in the model in the other half of the ring, counterbent and they picked up the wrong lead. PonyKid fixed it right away, but was devastated by the mistake.

It was one of those moments when I was so grateful for my own ammy experiences. I’ve been there—in fact it wasn’t that long ago when I got distracted (can’t even blame the pony!) and picked up the wrong lead in the hack. It stings when you know you could have done something differently, and had better results.

In my experience, the best cure for a horse show mishap is to take a minute and remember why you’re there in the first place. We walked back to the barn and pulled the tack, I told her to go take a nice long walk with the pony. Go have a good ugly cry (really the best cure for just about everything), talk to the pony, forgive herself, and come back when she had regrouped. While I can’t say it fixed everything, it definitely helped.

When these kids look like tiny professionals, it’s so easy to forget that they are just kids. Some of them are truly savvy and talented little riders who have the skill set to prevent all mishaps. Some of them are on ponies who are machines, and they don’t need to prevent any mishaps. But most of them are just kids. There is an amazing amount of pressure they feel to do everything right, but mistakes can and will happen for the vast majority of entries.

By the time the next morning rolled around, the only option was to go back in the room for the over fences with a clean slate and go do her best. I wasn’t nervous until PonyKid stood on the ramp ready to go in. If it had been me about to go in the ring, I might have thrown up.

I’d love to tell you a play-by-play of every jump and every turn, but it was over before I knew it. I know it wasn’t perfect. There was an add up one line, and a couple chips that not even some salsa could remedy, but none of that mattered when she came back to the gate. I swear there were actual sunbeams shooting out of her eyeballs and a smile as big as the whole of the Kentucky Horse Park on her face. That smile and that feeling of accomplishment erased all of the disappointment from the day before. She did her best and had fun. That was good enough for all of us. As we got to the bottom of the ramp, her trainer asked if I saw her scores. I just laughed and said that I didn’t even think about it! I didn’t care about her score. That smile was all I needed to see.

The only ribbons we left Pony Finals with were her exhibitors ribbon and her first-timer ribbon, but the good that show did for my child is worth so much more than any ribbon. Had she ridden the under saddle flawlessly, I don’t think she would have been as happy with her over fences. She needed to know that mistakes are okay, and that she could move on from them. We can choose to define ourselves by those mistakes, or we can have a good ugly cry, forgive ourselves, and come back to try again.

We left Kentucky flying high on all that she accomplished, chips and adds and all. My greatest hope is that one day when she hits a setback, that she will remember how she has the strength within herself to pick herself up and go back to try again. Sometimes life lessons come when we least expect it.

That Saturday in Kentucky, it came in the form of a brisk pony who gave her the ride of her life. The ride was not perfect, but neither is life. As long as you try your best and have fun, that will always be good enough.